Idea Guy™: A Collection of Words

The Idea Guy™ is the first and foremost role in any hacking team. Although the developers are responsible for making the foundations of the games, artists are responsible for making the games look neat, and the playtesters ensure a fun experience, much can be traced back to the Idea Guy™. Why is this Idea Guy™ so important? In this article, we will be taking a look at the history, role, importance, and possible future for the Idea Guy™.

It is said Idea Guy™s have existed since the dawn of humanity. Before then, their precursor, the Idea Grug™, were cavemen responsible for noticing stuff like “wood make heat when rub together”. Idea Grug™s noticed when enough heat was created, fire was started, and it was Idea Grug™s that challenged the landscape by trying to figure out how fire could actually be useful. “food + fire = good?”

As one dates further and further into the future, the distinction between an Idea Guy™ and just a regular ol’ guy can be more clearly identified. If you have similarities to other Idea Guy™s from the past, such as Leonardo DaVinci, Thomas Edison, Murasaki Shikibu, Tom from MySpace, Alexander the Great, Shouzou Kaga, Edelgard Fire Emblem, Winston Churchill, and Cartman from South Park, which mostly involves having really big and cool ideas you think would be super neat, you may be fit to be an Idea Guy™ yourself!

Idea Guy™s are the bread, butter, jelly, roast beef, and toothpick of any hacking team. The role of an Idea Guy™ is to present ideas to a team and not contribute anything else. It is a daunting task, that only the most dedicated of team members could contribute. However, it is an extremely rewarding job. Some teams, do, indeed, offer great gratitude, and some may even give special rewards to the Idea Guy™ for their extremely difficult work. The most rewarding thing for an Idea Guy™, however, is for them to see their super epic idea be used.

That being said, Idea Guy™s exist to assist developers when they have writer’s block, or to help flesh out existing features in the project. Idea Guy™s are also useful on a team to provide moral support, and possibly even give ideas on how to do that really cool thing in Team Fortress 2 you saw on YouTube once. But most of all, the most important thing that really makes Idea Guy™s special on a team is the fact that it would be totally badass to have Sans Undertale in the hack, and Idea Guy™s are the ones who will successfully formulate a plan that would allow you to put Sans in your Fire Emblem 6 remake and actually have him somehow fit in completely and perfectly with the rest of the cast.

As the days flip forward like nothing else, the progress made by the hacking community causes the community to grow, and a growing demand for more Idea Guy™s becomes immediately clear. However, the supply of Idea Guy™s appears to be unable to match the demand. As the number of people in teams who say “guys put Hatsune Miku in” and “let’s expand the class table” decreases, the future of the status of Idea Guy™ appears bleaker and bleaker…

That, or it’s completely fine. Might be that last one.

Moral of the story: Appreciate your Idea Guy™. He or she may just be in it for the fun, but even a bad idea can help inspire a good idea.

Hey guys i have this really cool idea for a hack

Apply if intersted serious applications only!

If your only good enough then i accept u

So basically, Sherlock Holmes for hackers.

@srek you thought about Grug dude I appreciated my Idea guy

How many Idea Guys™ does it take to change a lightbulb?

Bold assumption that he’d stay on that idea long enough to change the bulb. Hey, get this: a Fire Emblem hack with four lords! Imagine!

Ok that sounds cool, and I have some ideas for them. Hear me out. One of them is a jagen, one of them is eliwood but he starts with a horse, one is a myrm, and one is a dancer.

Hey, get this: a Fire Emblem hack with four lords! Imagine!

Choose your house and utilize your four lords (Godric, Salazar, Helga, and Rowena) to establish the newly founded Hogwarts. Will you aid the half-bloods, or seek out the exclusive pure-bloods club? What secrets await you in this magical world? Design my game for me to find out.

There are literally only 2 certified idea guys, @Levin64 and @BorsDeep: 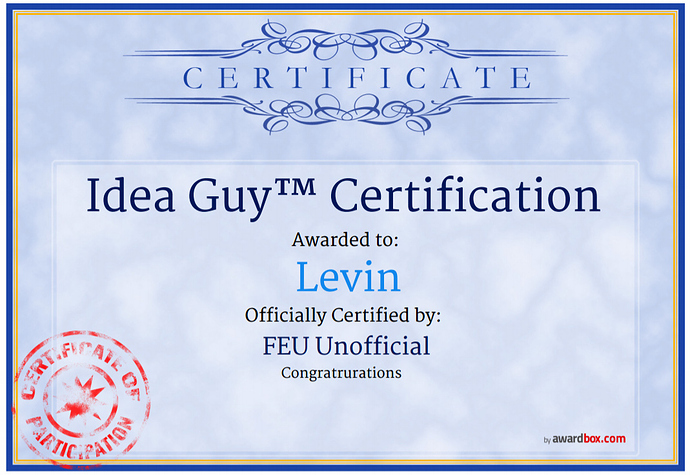 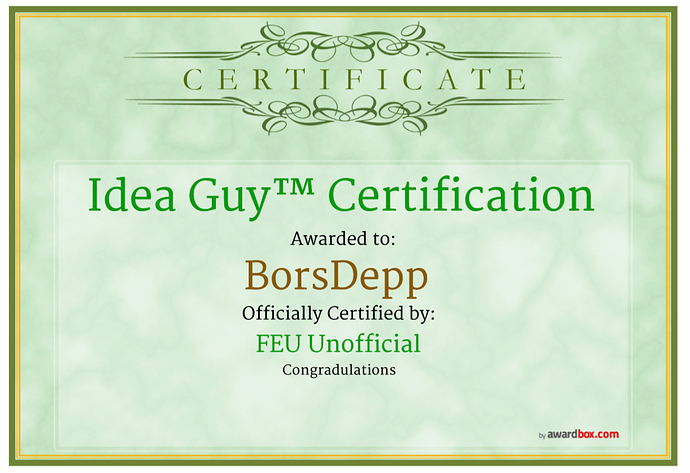 love you too my guy (And I wasn’t the guy that thought about grug, God did lol)

when mine has a stamp when Bors has none feels good

cmon zoi, you have to put 7 beeg paragraphs for a joke? you amuse me so much

You actually have to do something to get the participation stamp to be fair.