I had an idea for balancing mounted units

So, it’s a generally accepted idea that mounted units in gbafe are too overpowered. I have seen some discussion about this, and came up with something of an idea for myself.

I would like to know others’ ideas or opinions on this, or if anyone can see any flaws that I am overlooking.

All solid ideas - as a heads up though, FE8 default is x3 effectiveness on everything but the sacred weapons (iirc).

Personally, I think all lances being cav effective may be too much. Lance is a pretty common weapon type, and it’ll probably be too centralizing. I think you can just make horseslayers and the like more prevalent and with better stats to achieve the same effect. While all bows are effective against fliers, most vanilla games don’t have the same volume of bow enemies as lance enemies, and there aren’t as many fliers as there are mounts. Now, you could buck this trend, but generally the archer is more of a niche while a lance user would be more well-rounded - so they won’t need x3 effectiveness with their primary form of attacking.

This assumes a fairly vanilla context. You can def make anything work with enough thought and playtesting.

All noted. I think you’re right about the lances. Making the mount effective weapons more common is probably just enough.

If you want to take that approach with Lances, maybe just give Soldiers or Knights a Skill giving them auto-Horseslayer when equipped with any Lance? That way, it’s restricted to just one class and it gives them a combat niche to act as a hard(ish) counter to the class?

Also, while it feels bad as a player, you could take the Radiant Dawn approach and nerf some of their caps as well, though that depends on how often units are going to be fighting close to their caps for it to really matter. (EDIT - Also, enemy quality matters as well on this front.)

Reduce the movement speed for cavaliers from 7 to 6, but keep the paladin at 7. In FE8, reduce the great knight, mage knight/other mounted units besides flyers to 6 movement.

Sounds terrible to me.

I think lowering their stats would just suffice.
Mounted units are so OP because usually you don’t need strong units to beat the game so, why should you use a 5 movement unit when your Paladin can take every enemy without any problem?
FE7 Marcus, Milady, Perceval, Seth and Franz have better stats than most of the infantry, that is the problem.

My take on this has been simply to lower cav stats relative to their unmounted counterparts and keep everything else the same as vanilla. The role of cavs should not be as niched as foot units but instead be versatile. I’ve never been a fan of monocavs because I think they go against this idea of versatility. I’m also a fan of more effective weapons in general but especially for cavs.
I don’t think anything other than this is necessarily inherently bad design, but this is what I would prefer.

Just do what FE6 did with it’s mounts. Pretty much every mounted unit there is balanced apart from Juno, Treck, Miledy and Perceval. Although the latter two still have weaknesses that can’t be ignored. However, I do enjoy mono weapon mounts but that’s more to make different mounts feel more unique compared to each other. I think more maps where having infantry terrain costs as opposed to mount terrain costs is a boon is something that would’ve been interesting to see FE6 do more of however. Would’ve given Snipers a reason to see more use over Nomad Troopers at times outside of just Ch14.

High movement range is fun. Part of the reason why fe12 is so interesting to play is because of all the things you can do with those those 10 move dracoknights. Albeit class balance is slightly off because of this.

I think the best way to balance mounts is to make the mounts suck at base and potentially throughout the entire game depending on growths. Even with below average stats a high movement unit is still very useful and also leads to meme potential if they can kick ass too

I’ve seen hacks balance mounts by having infantry exclusive weapons, which is something I’ve done for my own project as well. I have a set of “heavy weapons” - Zweihander, Greatlance, Poleaxe and Greatbow - that are only usable by non mounted units, at C rank. 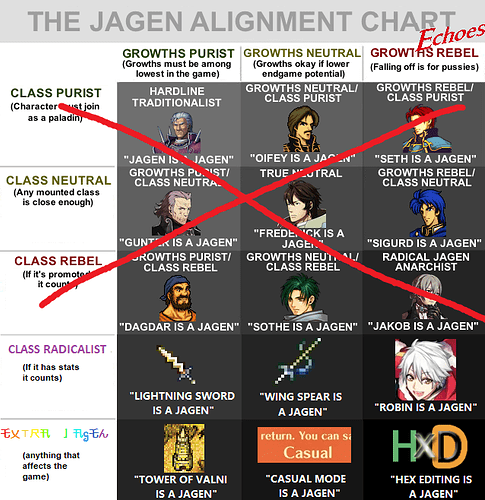 I find it easier to just give the mounted player units lower stats than foot units. That way they still have their high movement, canto, and rescue utilities, but you can curtail their combat prowess so that they aren’t completely dominant in that. For as terrible as, say, Fiona might be, she’s still mildly useful in her part 3 maps just for doing rescue drops. Of course, you don’t wanna make any unit who is as terrible as Fiona, but it just goes to show how rescue and canto go such a long way for any unit.

I mean you say that in jest, but he fills the role pretty handily. Lightning sword is just much more iconic.