Anyway, back at it again with another project: FEU (A pending name)
Current chapter being worked on: Ch4x
First Release Plan: Chapters 1-13 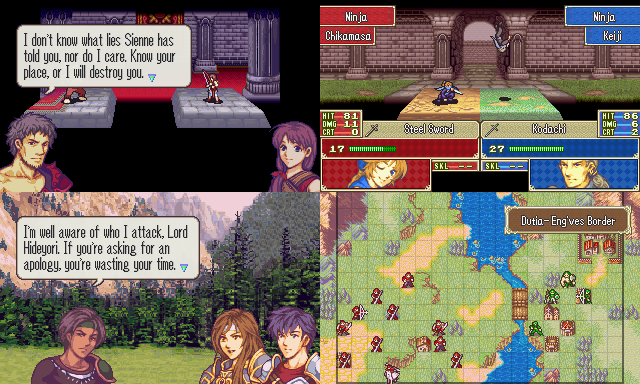 That’s… really all I have to show for now, it’s in FEE3 so expect more information at that time. 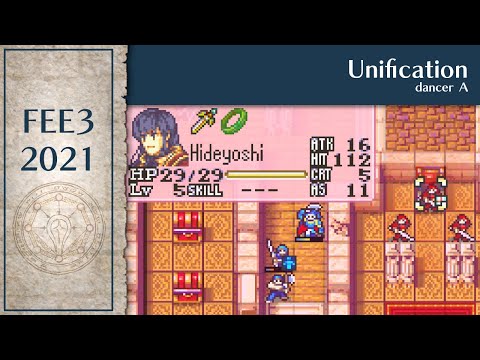 What about my other half finished projects? They’re in progress. Even… THAT one.

Given that I can’t count I guess I’m unprepared! But there’s the fee3 video, I’ll post something of relevance later

I was going to binge watch FEE3 after it was done, but had to watch this one as soon as I saw it. It’s not every day we see Pokemon Conquest inspired projects, after all.

Going to keep an eye on this one, hope to see more of it. Good luck.

Did I get you? You should have seen your face.

Anyway back on track with this now that fe6a is essentially done, so updates will be coming.

not gonna lie, they had us in in the first half

But I’m looking forward to what you have in store for the project !

Weekly updates? Surely not this again…

Most of what I’ve been working on is addressing some problems I found in the older build (enemy stats were kind of eh), revamping the weapon system (aka we’re full fates now for the most part), and rebalancing what’s already been show off. I’ll see if I can remember to update the first post with the current chapter being worked on. 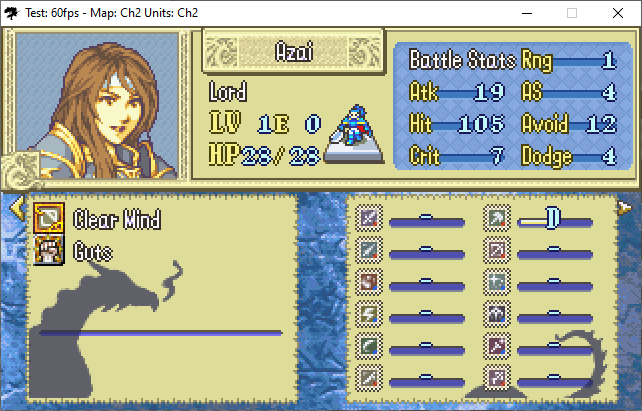 And here’s a screen, new icons courtesy of @GabrielKnight
The stat screen is slowly changing

Damn that’s one of the best looking stat screen I ever seen !

I see Fates I clap, really excited for further updates! 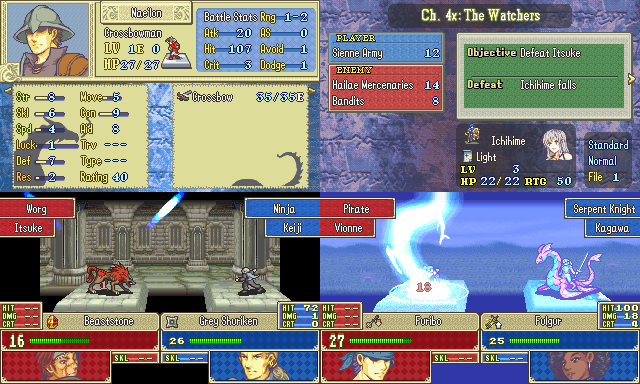 “Weekly” update, showing off a bit of the newest addition, 4x, as well as a new class (not finished yet) courtesy of @GabrielKnight (the crossbow, Fulgur and shuriken icons are theirs too). Serpent knights are inspired heavily by Langrisser’s class with the same name. They’re pretty slow on land, but unmatched at water movement. Rivers basically become highways for them to speed across.

So much going in those screenshot, I love the variety of classes !
But If I can, I have some little question:

oooh this seems promising. and lots of weapons types I see :o

The Serpent knights looks like a very interesting concept, with how rare water-oriented units are, even in romhack ! but is it complicated in term of level-design to take into account this kinds of units (like to make them shine in their own niche of gameplay) ? Anyway I’m hyped to try this unit

Pretty much. Some chapters no you probably shouldn’t be bringing them, but their movement isn’t reduced to 0, they just basically move as slow as an armored unit. So even in less than ideal situations they’re still perfectly usable. Idea is that you will have a wide assortment of units to pick and choose which fit better for each given situation (although if you want to pick your starting 10 and never switch, that’s fine too lol).

Also, does the ninja in the Hack works like in Fates? With different shurikens doing debuff on foes, and things like that. Even though Fates didn’t made a great uses of them most of times, it was an interesting kinds of units that can add a lot to tactics and shake things up !

There is a debuffing shuriken, I’m not exactly a fan of everything debuffing. Shuriken’s niche is everything is 1-2 range, while knives will always do at least 1 damage.

And those crossbowman looks quite nice ! Are they a kind of more bulkier archer?

And are the “worg” a kind of laguz-like units? It’s always cool to see some units like that !

Thanks for the answers ! It’s nice to give the incentive to player that they shouldn’t always use the same characters, and vary their team a bit !

now to find some SICK screenshots to pad this out 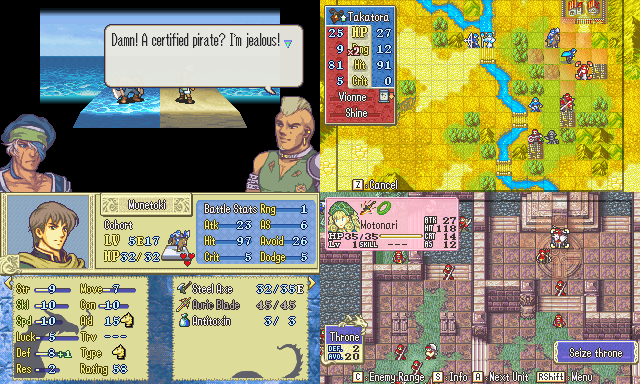 some portrait changes (Takeyoshi also has one planned), new units, mages being bad, and the final boss of A route

another progress report in the books 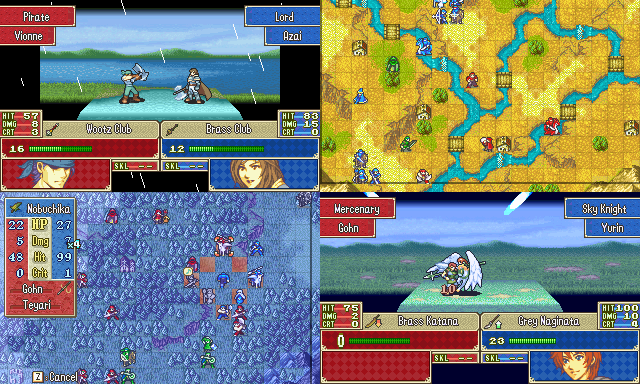 we have unlucky Azai, serpents now have map sprites! @L95 !!!
Wind’s new effect being shown off (Brave vs Fliers), and Yurin had a slight portrait change.