Why on earth would i mean restart whole run restart the chapter or try using gba emulator full version. Can tell the sites to get it for free but not allow due to site rules. Am i even allow to say this? I have not mention site name or any thing so i dont this this matters but then again just to be sure. If its not ok pls let me know mods i will remove it.

Ok i check like 5 emulators and dont work and before i write here i reset with all option ( animation on or off skip dialogue dont skip ,slow movement speed make it faster) end every time hack dies ds its glitch or my save its corupted.

I guess I’ll wait for a “final version”. I mean, I’ve been trying to play this hack since it launched, when it was just Wolt and Roy in Chapter 1, but almost every single day I see a new patch come out, with significant changes, that bring certain different experiences to each patch, in my opinion. I’m really enjoying Binding Blade Remake, even though it has some graphical issues like sprites with lost pixels…

Me too, I’ll wait until the “final” patch to play it.

For Chapter 7, Trec got his axe rank removed, but he still has a Killer Axe in his starting inventory. Shouldn’t he be given another weapon instead?

None gamebreaking but night aswell: In the opening geographical showcase for the map a few stray pixels for highlighting the borders of each region can be seen

Ummm i am too dum can u simplify

Something that I forgot to report: on my first playthrough, Zeiss continued to gain levels even after reaching up to 20. As in, the level would cap normally, but after being attacked by enemies a few times he would start gaining exp points again. It happened both before and after promotion.

That also gives me a suggestion for Larum and Elffin: since they cannot promote, how about giving them ten extra levels for growth (similar to Marth in his starring titles)? I’ve also noticed that they cannot S-Rank with their weapons, so that should probably be tweaked as well.

PS: On another note, the support viewer still needs fixing too. Makes it a bit hard to keep track on which ones I’ve already unlocked.

I don’t know if this was reported before, but after the last patch released, Trec can no longer use axes, despite still having a Killer axe on his items. In chapter 7, where he starts to be playable, you really need to use axe units to pass, in my opinion. 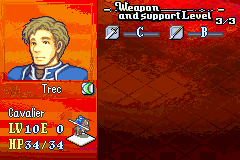 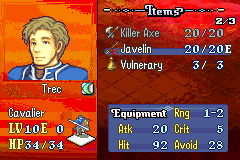 I fixed it earlier today, I just haven’t uploaded the latest patch yet. He’ll have a Killer Lance instead of a Killer Axe in his inventory.

I’m confused as to what needs to be fixed in the support viewer. When I go to the support viewer, it tells me what units you can have a support conversation with and what the current levels for them are. I don’t see any issues. Please describe them to me.

I’m talking about the support viewer AFTER clearing the game (as in, the one used to replay the conversations). Just take a look:

Only those characters appear, the others don’t. For the record, in Guinivere’s case I did see the conversations with Elen during the first playthrough, but they don’t appear as unlocked there (the ones with Melady didn’t seem to be implemented with the patch I used to play it, so I guess that may have to do with it). I would also suggest removing Debias altogether from it since he still shows up in Bors and Barthe’s support pool.

Okay, here are my findings…

I have removed the supports for Debias and made it so any unit who does not have supports at all (like the PE exclusive supports) do not appear in the support viewer. I will update it in the latest patch.

Thank you for letting me know about this. If there’s anything else I need to know, please tell me.

Sorry for to repeat but i Play on johnemulator and other android emulators this happen as well i get to chapter 16 narician talk with mudock , narician kill soidier ,Arcard and Roartz talk and then hack crash.

Sorry for to repeat but i Play on johnemulator and other android emulators this happen as well i get to chapter 16 narician talk with mudock , narician kill soidier ,Arcard and Roartz talk and then hack crash.

I don’t know if this might be the same case, but the user KrashBoomBang reported that his hack (Fire emblem: The Four Kings) may crash in chapters 8 and 9 when trying to use save points, but using the MGBA emulator is safe to continue. So try this one if you have it for android. [FE8][Complete] Fire Emblem: The Four Kings (8/19/22 Update: RR Quickfix)