Echidna, Lady-Protector of the Western Union.

My attempt at the Fates Villager.

hey, um, this is kinda awkward, so…

I was checking the portrait repo thingy and in the FE6 section I noticed that there’s an Allan alt portrait, well… I think they’re the same portrait, and I might have uploaded it to two different Mugging Blitzes since I’m a pretty forgetful person.

I also noticed that the updated versions of the Tikis made for GFE1R are missing, So… here: (NICKT was the one who cleaned these up back then, so also credit him, I guess.) 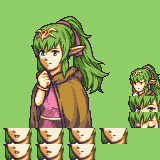 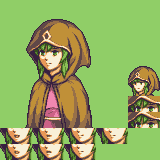 “You dastard, you killed Liza I will never forgive you.”

Liza death noise, Thanks @Obsidian_Daddy for the help

Fe4 Tordo or is it Thrud?

Two portraits I made awhile back, there my OC.

Dump time, but nothing too glamorous.

It already had animations for sword, lance and bow, but the unarmed ones were missing.

In the past, I made some map sprites for the original Celica animations, but here’s an updated version for this Eirika repalette:

Couldn’t make her cape red without making her look like an enemy unit, so this will have to do.

I admit this one is kinda lazy, since I tried to make something more unique and failed. In the end, I just decided to slap Amelia’s face on Blademaster’s axe general. I might try to make something better in the future, once my art sucks less.
6. Female tarvos map sprites

There were already map sprites for this animation in the repo, but they looked too manly to me. Here’s my version:

There are already two versions of this. Mine combines the staff from Eldritch Abomination’s with the crown from SkidMarc25’s which makes it more representative of the battle animation.

Someone brought to my attention that the repalettes for the village tileset don’t load properly. Here’s some .bmp files that should load correctly.

Useless to everyone but himself, I gave Caellach a nap and a Snickers bar.

So remember a few hours age when I made Faramir from Berwick Saga.
I thought it would be a good Idea so I made a half body to test myself.
boy did this portrait drain my sanity. 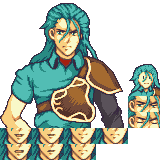 Also thank @Obsidian_Daddy for the help.

So here’s a little something I did in my free time.
Basically, I took the Generic Female Soldier portrait’s face, and slapped it on Zarg’s Soldier Alt3 portrait.

And this is the result:

I call her: Skinny Female Soldier

As you can see, I also added some blinking frames (as both of the base spries lacked them). But I’m not sure if they look any good

After three months of procrastinating… hopefully, it will have been worth the wait!

I’m not totally happy with the palette, so that may get an update sooner or later - and I certainly think there could be more details - like flowers or a market stall. However, this is out in the open now. So, if you have got the inclination - go ham and add/change whatever you’d like! 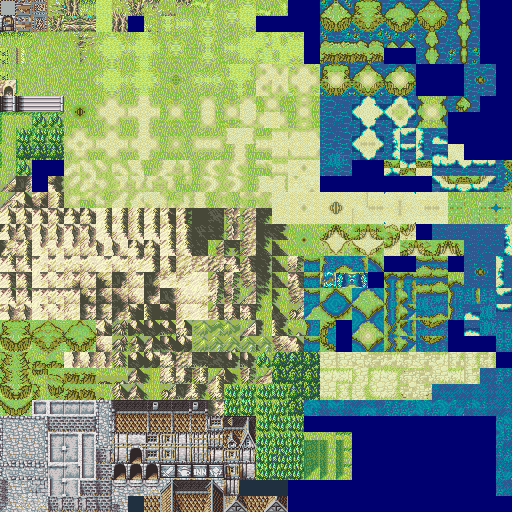 Other than additional pieces of shaded grass, the overworld’s pretty much remained unchanged - so it should be compatible with older maps if you’d like to use them as a base. There are multiple open doors - each with a different function: vendor, house etc.
There isn’t much space left on the object-set - but with a bit of jiggery-pokery, you may be able to add a few more tiles of your own. 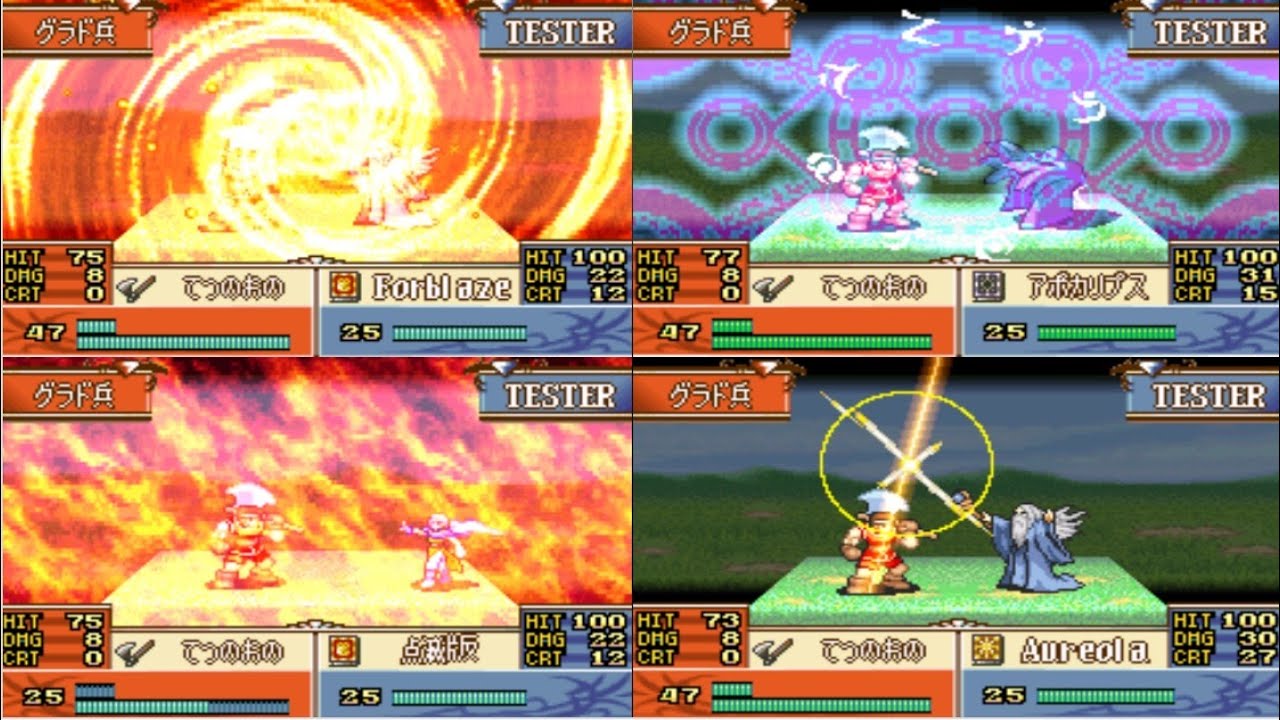 Next time, I plan to make Legendary Animations for FE8.
And, I’m also planning to make Grima and Anankos.

※If your Japanese is garbled and you are unable to import, please use this option.
↓↓↓↓↓↓↓↓↓

A while back, I made an edit to the Fields tileset with additional buildings and wide bridges.

Recently, however, I noticed a rather crucial missing thing: farmland. Fire Emblem maps often take place in vast countrysides home to many towns; these people, after all, need somewhere to grow their food.

After some searching, I came across a suitable source for that food; a tileset on OpenGameArt, featuring some decent - but effective - crops.

In addition to those, I’ve made quite a few more improvements. Check out a variety of new tiles!

Download here. Give credit to myself, WAve, and Beast.

EDIT: Modified the tileset to fix the bridges’ terrain types, as well as to add some new stairs options. It’s available at the same link. 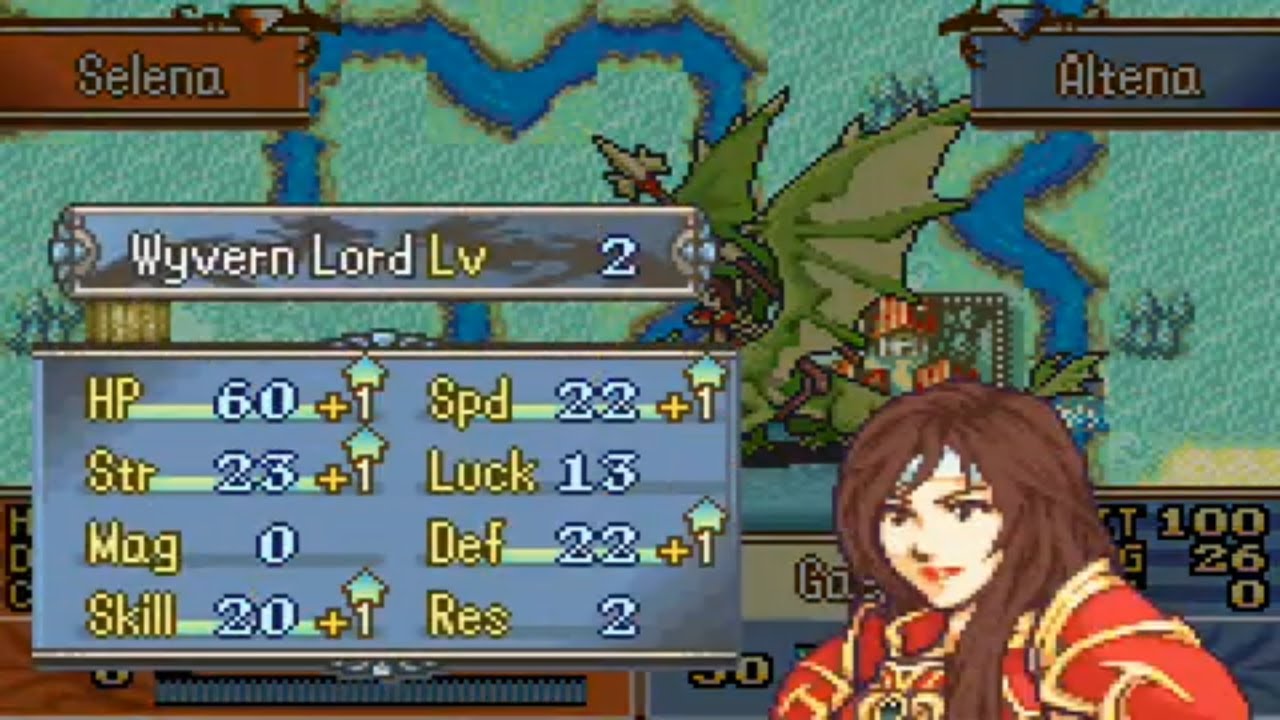 I’ve been thinking alot about an FE8 Prequel lately

Hello, i’m just here to drop off my map sprites for the marauder class made by Spud 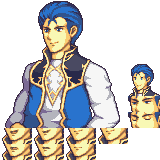 Fe4 Lex half body because fe4 needs more love.
Also thanks @Link for the help.

So… remember that old zip file I linked with the Regi Trio anims? I decided to make anims for the Vanillite line in the same format, using sprites from the pokeemerald pokemon-expansion thingy on github. Enjoy!

Forgive me If I’m wrong and overlooked it somehow but I noticed a distinct lack of Axe Ephraim in the Repo, so I decided to change that

I also (hopefully) formatted the file names the same way the Repo does, to save y’all a little trouble.