This may in fact be the most unpopular animation I ever make.
It’s the lance general with no chain.

Edits made by myself and Levin64

Uhhhh I just thought about this this morning so I did it real quick.
Female Nils bard.
https://drive.google.com/file/d/1XaR359yRrjPsi9bMJC357hb9YtCeYeqA/view?usp=sharing

Map sprites in the link.

I decided to script GabrielKnight’s Roy animation. Credit to him, of course, for creating the original sheet.

I also scripted a GabrielKnight anim, the female bard (that makes two for today, huh). Also finished map sprites for it. Credits to him too, obviously.
https://drive.google.com/file/d/1fakf4w0IUP6XNsUF33-j6JGMpeT6LOvc/view?usp=sharing

Because new faire and breaker skills wynaut
I swear I now have nearly any faire/breaker skill you could want on this list. Except maybe dragon/beast stones. But that doesn’t feel right, so I’m not doing it XD
Also Great/Awakened Aether icons. Do what you will with that.

And the growing full sheet: 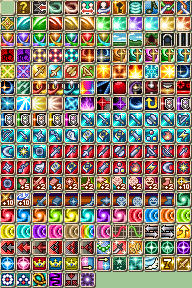 The Pavise rainbow is now complete

Old Kent as steward of Pherae

Sue as Queen of Lycia

Roy as King of Lycia

Roy as King of Lycia (Sad)

Roy as King of Lycia (Possesed by the Binding Blade)

Crazy Sigurne returned from beyond grave

Batta as Xavier the Renegade Angel

Emperor of Mankind from 40k (that one is super old)

Jehannans, but with dark skin.

Alright, I made an account to post this. Here’s an updated version of the sniper map sprites designed to match DerTheVaporeon’s archer a bit better.

They’re designed to look similar to Der’s unpromoted Archer, as Archer with Brown Bow → Sniper with White Bow always struck me as odd. No particular animation in mind.

For the other point, thank you for reminding me about the female sprites, I forgot to include them earlier.

Here’s my attempt at making a helmetless SALVAGED knight

note for palette usage: The armor trim and skin color both use the same colors, so be wary of that or you might end up with weird looking skin color.

I honestly forgot to upload the link for this animation the other day. I did get to finish the female version of it in that time however. Its the dark mage!

So it turns out that the Female Summoner has a bunch of unused colors. The magic animation has 3 unused colors, but the staff animation only has 2. I did a repalette of the animation that uses the extra space to give the Summoner’s robes and staff their own colors instead of using the same color as the hair.
https://drive.google.com/drive/folders/1kABgw8OV96nXl0R1-lD4zaR-Hz7NA4bO?usp=sharing

Might as well dump the custom mugs that are waiting on the next Blitz here! They are all F2E!
Troubadour

I already posted this guy in my own thread, but here’s a version recolored to match vanilla gbafe palette instead of my custom one and reformatted to match other stuff in the repo, just in case someone somewhere wanted it or to make a variant thereof.