Greetings, I am Brober. Longtime lurker, first time poster.
FE Oathbreaker (Pending Title) is a project I started in the summer of 2020. Being a longtime lover of the series, I had done some minor hacking to the original 3 gba games (Portrait editing, animation editing, that sort of thing) before, and knew that I wanted to do more.

As a long time tabletop DM I had always taken inspiration from FE for my games and always had a novel idea in the back of my mind of “If I could make my own Fire Emblem, what would it look like?”

So, what started as screwing around in febuilder turned into what I have today… Which is a rough skeleton of a rom hack and many frustrations not knowing how to get my vision into the game.
I am a carpenter by trade and the stuff you kids do on the computers is daunting to say the least to a simpleton like me.

What the project is as of now:

A romhack with 27 planned chapters + 7 gaidens.
I have atm 6 mechanically playable chapters with the first 3 having working start and end events, as well as a mostly finished prologue. More on that specific issue later.

A custom class system with semi-branching promotions (The green cav promos into paladin, the red into great knight as an example) with additional new classes taken from other entries in the series. (Dark Flyer, Mortal Savant, War Cleric to name a few.)
Custom overhaul of the classes skills using SkillSystems. No 2 characters will have the same exact skills based off of what they started as/what they promote into.
Custom animations taken from the repo for some classes, (All of which will be credited) with other minor customizations done by myself to some of the vanilla anims.

Full original story planned from start to finish, written by, myself, and existing mostly in my head keeping me up at night.
Will be using beloved FE troupes such as the Christmas Cavs, Jagen unit, axe fighter duo, pegasus sisters with triangle attack, crappy archer,
3 lords with the main one promoting probably a bit too late,
sacred weapons that you can use or conserve fe6 style hidden in the games gaidens,
prepromotes that will probably bench the units you’ve been using for half the game 'cause they’re just so cracked when you get them. Cough, Pent, Harken, Cough
And last but not least, there may or may not be a giant dragon as the final boss.
In the words of Volo, “My dear, every story benefits from a dragon.”

What I don’t know how to do/need help with:

World map events: I am not doing a movable world map and am just planning on doing chapter start narration with the map, fe7 style. I’ve seen a tutorial on FEU for this and to say the least it might as well have been in Spanish. Heck, some of it was. My specific issue that finally made me fed up enough to create an account and make this post was trying to do a simple world map event right after my prologue event, and, well here we are.

Event Assembly: Up to this point I’ve exclusively used the event editor in FE builder for changing start and end events. Which is all I think I really need to do since I’m just gutting/replacing FE8 events. Still, my main problem is I am unfamiliar with what all the editor can and can’t do. Also major issue I have with every event I’ve made is my fade to black transitions, especially with map switching, are broken and I get weird epileptic after-images or broken transitions where it should just be black.

Custom Triangle attacks: (Not a priority, but thought it’d make the opening cutscene look flashier) From the one tutorial I’ve seen on here it looked like some scary ASM stuff.
I have not touched ASM so far and I’m rightfully scared to do so.

On the art side of things:
One of the main issues is I will want custom CGs for big story beats, FE7 style. If you know someone who commissions this style of artwork HMU, I certainly couldn’t find anyone.

A portrait artist that can take a second look at my custom portaits and maybe help me get them more in line with a singular style. I don’t fancy myself an artist and most of my portraits were hand pixel-arted using a reference image from pinterest or something similar. I’ll post a couple of my characters as examples.

Obviously there are a hundred more tiny issues/frustrations that come with romhacking that I have not posted here. I’m mostly making this post just to get some feedback/instruction from anyone willing to help. Any comment or tips no matter how minor are wanted from you folks. Short-term goal is to get a playable demo of the first 6 chapters out soon and get player feedback. Long-term dream is of course to have a full fledged Fire Emblem rom for this community to enjoy one day.

This sounds fun and as someone with no skills I wish you luck! But I’m posting to also comment that I absolutely love going to new hack discussions cause a solid 30-40% are new/lurker accounts who have to wait to post pics and I dunno it’s funny af to me.

sounds like this hack will be great and I’ll def be keeping a tab on this one! (no pressure, billy joel)

To solve the fade to black issue, you can use background id 0×35. This is a completely black background. Sometimes it will flash back to the the map for a split second in between events even with fadi, this can be solved by creating a completely black map and clearing all of the units in the event. I don’t know if there’s a more conventional way of solving it, but that’s how I dealt with it.

With triangle attack, you mentioned you were just using a generic pegasus trio triangle attack. Nothing needs to be done here except simply toggling the triangle attack ability on the units you want to be able to use it.

congrats on the project so far seems like a lot of work!

If you need help with portraits feel free to send me the ones you want a second look. I am an illustrator whos been doing some for fun, mostly mixing vanilla portraits. Ill attach some as example 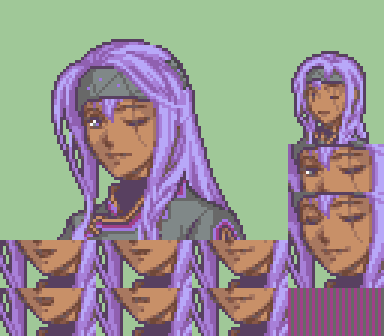 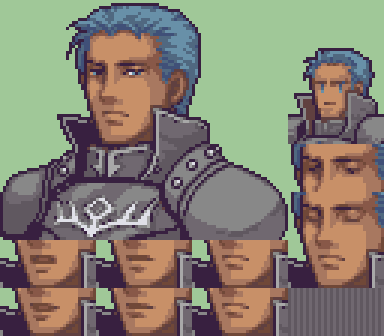 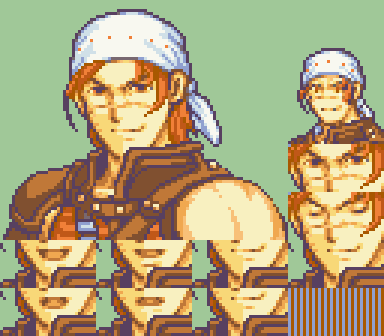 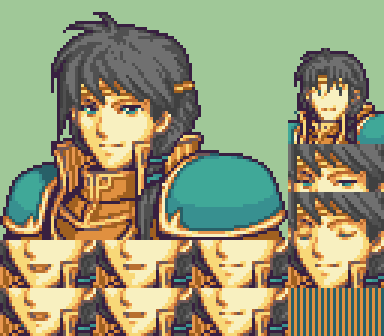 Oooh thanks for the fade to black fix, I’ll have to try that.

As for the triangle attack I am using a generic pegasus one for the sisters so no problems there.
I had the stupid idea of replacing the armor one for a scripted battle in the prologue with a rogue, sage, and paladin as the main attacker. (I don’t even know if its possible to make one with 3 different classes, the armor knights use 4 classes technically with a male-female armor and male-female general but yeah it seemed like some spooky ASM changing)

Thank you so much, I’ll let you look through what I’ve got when I’m allowed to post images or links.

haha oki!
If u want to upload them in a drive folder and send me feel free to do so aswell

Also major issue I have with every event I’ve made is my fade to black transitions, especially with map switching, are broken and I get weird epileptic after-images or broken transitions where it should just be black.

Use this event template before background transitions: 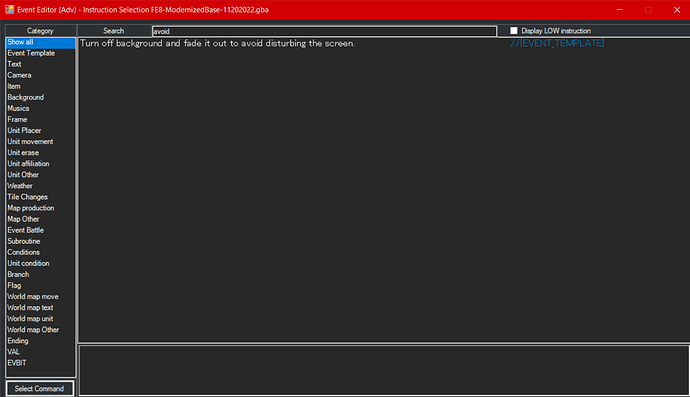 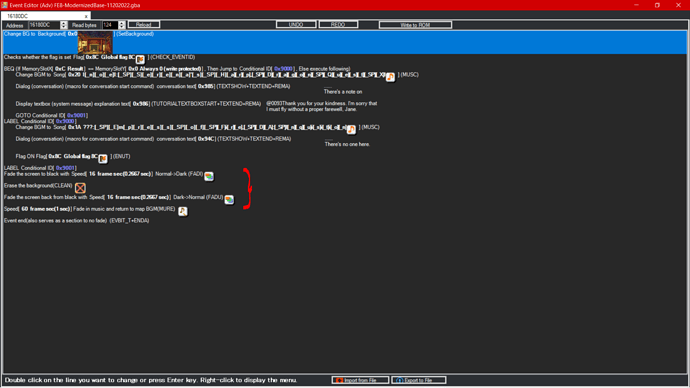 This gets rid of the pixel vomit that ensues whenever you switch backgrounds.

Hi, sorry its been so long, I thought if I waited a while I’d be able to post links and DM people. Not sure what I can do to grind invisible trust points, its been about a month, and I can’t DM the staff to ask if I can’t DM.

I am very glad for your help though and will send you stuff when I can.

I if you have discord you can dm me there to talk more about your project if you are spanish speaker. It helps sometimes when you talk with someone who speaks your first language and I think this is yours. Please tell me if I’m wrong and good luck with your project

Is my English that bad? No I don’t speak Spanish sorry.

I’ve seen a tutorial on FEU for this and to say the least it might as well have been in Spanish. Heck, some of it was.

I said it cause this
Sorry then
Lol