Hi, I’m Onmi. Some of you may know me as the guy who was working on an FE6 update that was at the time titled ‘Divine War’. You may have assumed the project died, it didn’t, I simply preferred not to be on Serenes anymore, as well as not wanting to join FEU until I had the project basically completed. Which I do now.

Basically completed because we’re still getting the last few remaining art assets together… which is where I have a problem. See this christmas is the planned release date for the now titled “Maiden of Darkness” demo, since inception the project has never had a portrait artist, we’ve gotten by with bouncing around to people who have free time. However when you have a release date you’re actually approaching, you can’t afford to simply run about headlessly hoping that someone with free time will drop something into your lap.

While the project needs a few portraits still, for the sake of the demo, we only require 2 more portraits. Those would be for Nino and Mary. So I am putting out a request here for any portrait artists willing to lend aid. I cannot offer compensation, so I realize this comes off as selfish, the only thing your help provides is getting the project actually out and into peoples hands to be playable.

I can also understand if you fear that your work will be wasted, what if the project doesn’t come out? That’s why I have waited till now to request. I make no bones when I say the project is approaching its end date. There are a few odds and ends to be cleaned up but otherwise the only thing truly holding back a release is portraits. If you are interested, I would be most grateful for the aid. As a visual guideline on the custom portraits here are two others that have been completed,

Notable Features: Brown hair, A Red or Green colour scheme. Has a headband. She is a fighter, so she shouldn’t be a twig.

Notable Features: She should have a pendant and still be recognizable as Nino 20 years later, as the characters who have previously met her can recognize her.

EDIT: I would like to point out that these are merely the portraits necessary for the demo, the portraits in full that I require are.

In these cases these are enemies or NPCs, hence why I don’t necessarily need them for the demo. And yes I can have portraits change on promotion, this is because for my hack, Supports are event based, so I can have them use custom music and give items and money and things like that normal supports can’t do. But similar to enemy portraits, I don’t need the promoted portraits for a demo

Oh boy! I was wondering where this project went, and I’m excited to hear that it’s almost done. I’d be happy to try out for portrait-making, probably for Mary rather than for Nino.

Speaking of which, are you still in-need of someone for support-writing? I know you required it earlier (and I’m pretty sure that I wrote one such example for a Hugh/“Lily” support line), but I am wondering if you still need any written.

I can always use support writers, When I say the project is close to completion I mean in the sense that I have a game that can be constructed. So I can just pump out text for the game and it wont take any time away from the actual game development. And I greatly enjoyed the support you wrote so I’d be happy to have you onboard.

May I ask what the non-promoted Roy, Lilina, Guinevere, Wolt, and Elphin look like? For at least one or two of them, it would be most likely a lot easier to design a mug for them if we know what to base it off of; it’d be pretty jarring to see Wolt suddenly get buff, for instance. Also, what classes do they promote into? Using Wolt as an example again, does he promote into a normal Sniper or does he gain a horse and become a Ranger?

They look as they do now, But it’s worth noting that with Roy and Lilina their portrait is also them aging, as the time you get their promotion items/Roys in-game promotion is a year from the start of the game.

And his promoted sprite

Those shoulder shields have the emblem of the Lycian League upon them.
http://puu.sh/jla1X/102560e0af.jpg 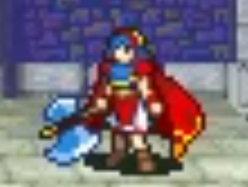 Her in progress promoted sprite

and his promoted sprite

Though I never demand that it must be adheared to, if someone wants to give Wolt a fancy jacket for example, they can do it and we’ll alter the animation to match him.

Holy mother of god, Hector’s daughter got buff like her name is Lilina Hogan!

Thank you, but we already have one

We really require a dedicated portrait artist, most of the animation work has been completed, with very little left to do.

As you can see, there are very few animations left to do, and Temp has them locked in. I will eventually post a new thread detailing the actual hack in full.

God, that looks awesome! Mind if I borrow it for my own project?

You could always do what vilk did and give him some

facial hair when he promotes.

Onmi, I’ve noticed elsewhere that you posted the ‘flats/WIPs’ for Mary. Do you still need a sprite done for her, or do you have someone working on her now?

Ah, yes, just yesterday I found a portrait artist who, in a few hours, produced these flats for Mary

He also produced this sprite for Iris, who I’m trying to get aged up because I don’t think she looks 34

old Nino would probably look older if you made her tiny loli shoulders bigger.

I’m not sure what it is, but Nino’s face seems a bit manly. I think it’s the nose? The nose seems a bit too pronounced, so that might be it.

Also, maybe the eyes. I know Lilina had big wide loli eyes in FE7 and FE6 and there’s a huge age difference there too, so maybe Nino should still have slightly bigger eyes than she currently does.

To be fair though, Lilina’s “big wide loli eyes” would be because she was 4 and 14 (ish) when she was seen in FE7/FE6. She was still a young kid, and right about the same age as Nino was in FE7. The eyes look fine to me, but the nose does look a bit too noticeable compared to Nino’s cute button-nose from before.

Eh, yeah. I used Lilina’s eyes as the example since they’re both the archetypical “loli mage”/Est you get. Still not a very good example.

I still feel her eyes could be a smidge bigger, but then again, I really liked her EN portrait. It’s fantastic, and it doesn’t have big loli-eyes, so I’m likely wrong about big eyes anyway.

The nose is definitely the biggest issue though.

So this is the currently in progress Mary, her necklace and scar have not yet been sprited on, and the artist is still learning shading. Still it’s pretty good for his second sprite ever after a 5 year break where he only did 1 poor portrait.