Hey guys, I’m not trying to make money with this remake, I only use Patreon as a media for easier access and easier management with other projects I’m working on, right now. The Remake is free for everyone and the subscription is not required, only if you want to donate something yourselves.

Tell me what you think about this project so far!

Fire Emblem IV-V: The Holy War is remake of Fire Emblem 4: Genealogy of the Holy War and Fire Emblem 5: Thracia 776 using the Lex Talionis Engine. It aims to be a new take on an SNES classic, adapting some features from the original to GBA ones as necessary, yet trying to stay faithful to the source material, rebalancing the levels, stats, weapons and places like the arena and the shops.

Chapters are going to be done as huge as they were in the original game, being a total of 12 FE4 maps + 35 FE5 maps of variable length. Later, we aim to rewrite a little, only the necessary, of FE4 and FE5 stories so they fit as only 1, making it fluent to side with Sigurd, Seliph and Leaf (names used are going to be discussed in a form for every release).

Important note about playing
As said before, this is made with Lex Taliones Engine, which means it is not a romhack, but a game itself, so no patches are needed, no roms from snes, no cheats of that kind.

Here you have the FEE3 from 2021 so you can see a demonstration of how the project goes: 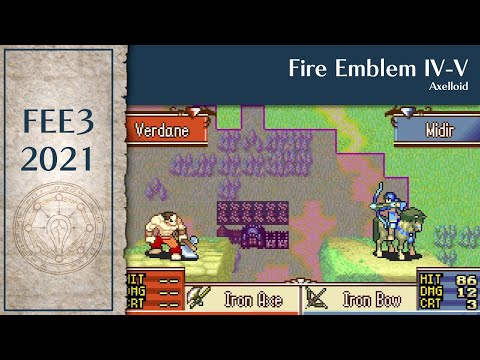 Credits inside the game. Most of them to FEuniverse and Serenes Forest Communities

Though I’m having all support I could ask from Rainlash and other people from the Lex Talionis Community it’s still only me remaking everything, so there may be cosmeticals bugs and errors with some animations and sprites. Feel free to point them out to remind me of them if you wish.

If you find any gamebreaking bugs, do post about it as soon as possible so I can look for a solution and issue a fix patch.

To run the game you need to download and install the following:

Sigurd, Seliph and Leaf (names used are going to be the translated versions of the oficial Romanjis, so some name may change)

If you’re using NOJ names shouldn’t they be Siglud and Celice?

This was unexpected and it’s amazing!

This looks promising but the screen cuts out some of the text and I can’t resize it.

Also the contrast between the color background and the text in the character information screen makes it hard to read.

Nope, the official romanjis are Shigurudo, Rifu and Serisu --> that’s translated as Sigurd, Leaf and Selis (which yeah you transform to Celice) but Seliph is one of the special cases where the official name changes into Seliph… also Gandolf was changed to Munnir because of the Gandalf we all know and love from LOTR, but is just exclusively done for american translations, british translations keep it as Gandolf, with the O to make a difference.

It looks fine for me, maybe is something with your resolution, have you tried to go to extras>options and change the window size?? 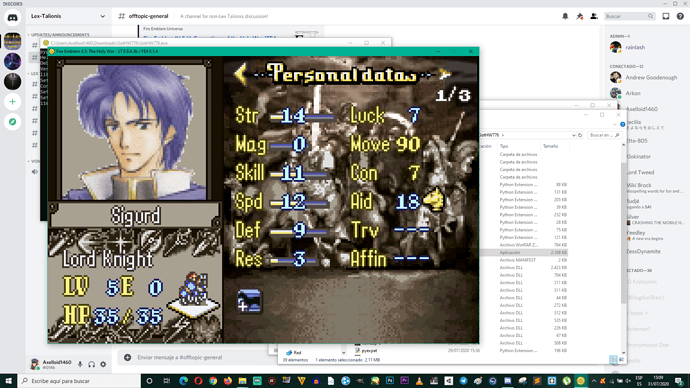 The prologue is challenging but not impossible.

Some issues that I saw are:

yeah the movement thing is a brute arrangement I had to do with the movement cost and the movement capacity to fit FE4’s… The village part is that hard, too, in FE4 because is made that way so you don’t get all 25k gold the 5 villages gives you together, it makes you rush to save it or let it be burned, the thing is that I’ve not been able to make the gold reduction that FE4 had on the villages when a tile was destroyed, so you can any way get the 25k gold

Nope, the official romanjis are Shigurudo, Rifu and Serisu --> that’s translated as Sigurd, Leaf and Selis

I think what you’re referring to as “romanjis” you actually mean the kana (シグルド/リーフ/セリス)? The Romanized versions of names (i.e. converted from kana to ABC) officially used by Japanese material such as art books are different from the names used by the old translation patches. For example, here’s “Siglud” in the old TCG. It’s okay to just say you’re using the old patches’ names.

The village part is actually a good thing because it makes the player actively try to complete the level quickly rather than turtling.
The movement thing with the brigand is not an issue if their stat sheet is changed to reflect their actual movement (change to 80 instead of 60).

This definitely looks really cool and all, but I just cannot understand why you’re using the TCG names.

Haha yeah, what I’m referring is the romanized version of the katakanas and hiraganas of their names, which are called romanjis… And to make some kind of sequence group which I can refer from I mostly use the translations given to this romanjis in the Trading Card Game

I like TCG as a reference more than the other versions, because I feel it more stable and formalized… Although there are things like Siglud that are obviously not correctly by literally translated, and those a fix them

It’s great to know that you like how is everything going on so far, though it is obly the prologue, good news are that I’ve almost finished the title screen intro, it will go faster (music included) than the original due to engine mechanics that would make it incredibly heavy (already 120mb only the intro) and slow to read for the engine itself… Also seeing what’s happening with the names, I’m preparing a Google Form and I’ll share it here and at Serenes Forest, for you to vote for the names you want to see in the remake

Here I have the little Google Form I said, hoping to see which names you prefer

Characters and Places Names - From Prologue to Chapter 1

This is a little quiz for me to know which names you prefer for me to add in the game as the characters and places names. This variations are the ones I found in the TCG, Fan Patches, Romanji Translations and Wikis (from which I found 4 of them...

And here we are! First Update. Let’s call it the Intro Update xD Because that is all I’m adding, THE INTRO FROM FE4.

It is not as slow as in SNES due to engine mechanics for animation reproductions, I also had to speed the music up and tried my best to make it fit the intro, but there is a 500-600 ms difference with the original, and a little brute break when FIRE EMBLEM title appears.

I’ll try to fix it as we find a better way to the intros… Also the intro itself weights almost as much as the v.1.4.3 alone and takes some time to load (try loading +3000 images quickly xD).

Also, now Minimap scrolls when bigger than the screen.

I called it! I god damn call it! The remake of The Genealogy of the Holy War!
I have to try it out, but only after I finish the SNES version and Thracia… don’t spoil me!
Unfortunatly the villages are gonna get rekt in the GBA, unless EA tells the game to destroy the villages like FE4.
Goodbye speed wing from the Jungby nearby village… : , v