That should already be fixed tho and that was a Setting I made for testingpurposes that I forgot to change back later. Did you download the patch revently or a when it first came out?

I think before your last message, (not 5m ago)

okay,I will look into it quickly

okay,that is literally the most bizarre thing I have ever seen. I can clearly remember having saved fixing that,but it really was set to the wrong chapter again. No Idea how that happened. Update will be up once I have gone through the stupid process of saving all 4 versions as patches again. 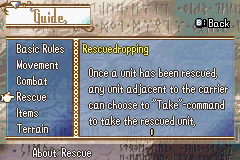 I decided to expand on the tutorialaspect of the games to provide better
clarity for how the games can be played and for the rules.
This is just for convinience if anyone actually wants to recommend these patches to new Players for some reason and is pretty meaningless for people who already know the games. Currently, the only aspects that are changed to a meaningful degree are that I put a event into the tutorialmap of FE6(patch still unreleased) that mentions attackspeed existing and to tell the player to be aware of it when making moves and added entires in the guide in FE8 to explain rescuedropping(Image) and how exactly a few aspects are calculated(Like Devilaxe being 31%-Luck).

Idk when the next update will drop tho and until then, changes like these will officially stay unimplemented.

This interests me I must get this patched to a game and check the items out.

It was actually a pain to do the transfer on VBA and Dolphin lol. When it comes to the items, appearently people found out that the items are actually stored in the savedata and not the rom. And I have no idea how to make them a permanent part of the menu in the romdata(I am actually really bad at hacking), so you guys just get the savegame instead.

Is there a way to see the data in a save file?

I do not know actually.

Put a list of Issues still present in the OP for reference. I did not include Pablo and Riev not being completely identical to their japanese counterparts, because what I already did is close enough.

For anyone still looking into this threat,I want to ask something about FE6. Do you think it is important for the experience that weaponlevels are really slow?

Because I want to make it so that 2 Wexp are optained upon defeating an enemy instead of 1(really quick thing to do in FEBuilder) and I do not know if I should boundle it as an optional IPS-patch or if I should include it in the mainpatch.

Similar situration with if I should give Idunn the unused demondragonstone on hardmode or not.

(also,if someone wants to figure out how to make weaponlevel threshholds the same as in FE7/8 and how to make the supportgain system the same too(I heared at least it functions diffrently and limits the supportpoints gained per map more),then please tell me. I am still basicly the worst hacker ever and more quality of life-changes can only make the game better.)

No direct feedback yet? Well dang,guess I will just make it IPS for safety then for now. And I expect to not get an answer to the question of if I should put in the missing weaknesses(primarily horseslaying weapon working on nomads or not is a big deal),so I will make that an IPS patch too until I get feedback on it.

The FE6 Enhancementpatch got a rushed release now. Not the worst thing tho since I can always update it(I mean,I certainly had to do that with FE7 and FE8 a lot because those patches were just broken for the longest time lol). As always, feedback would be appreciated, but I know nobody plays these xD

A minor update for FE8 that fixes a typo and nothing else and an FE7 update are planned to release soonish ™ btw.

The Fe8 update is out and I added back the mogall movement during ist spellcasting back…but I did it using the two frames before the loop,so it flashes. It flashes a lot. I apologize to anyone here who has epileptic problems.

Edit:oof,forgot that I opened the supportroom for fixing purposes. Wait a second.

New update for FE7 is now on.

So basicly, update on the situration for you folks. I already started working on the enhancement patch for EN, but school gave me major stress and anxiety the last three days and I was just physicly too tired to do much and felt burnout from basicly everything because of that. I will definitly not cancel the entire enhancementpatch-thing and I will edit the mogallanimation in FE8 to not trigger epilepsy as soon as everything has calmed down a bit.

When it comes to the future after GBA, it is a bit harder to really do much. I have no idea what to even do in FE4 except for potentially checking the most recent translationpatch since I heared a texteditor is currently being developed for SnesFE and I have no idea what there is to fix in Fe3 and Fe5 either except for hitrates not being locked between 1-99% anymore in Fe5 and I already got in contact with someone who is eventually willing to check how that works.

Tellius has a lot of stuff worth editing, but that is both really complex to hack from what I have seen and Wiiscrubber does not work for me, so I have no way of actually changing the Iso. 3DS Fe is off the table completely until more advanced hackingtools come out and NES Fe is basicly the big nope for people who cannot hack. No documentation and I surely won’t find anyone who wants to edit the data for me.

So basicly, I have to find a way to get anything done after GBA first. However, GBA is not completely over, so all that stuff is not the biggest concern right now.

For GBA, I considered adding the RNG randomizer-patch to the roms because I think it really does not change the intended way of playing, so it was probably a mistake to not include it for FE7 and FE8 in the first place(FE6 does not seem to have it).

I will also probably put in the patch that does not end the turn upon selecting talk, because a talkconversation rarely gives one an advantage like supporting does and the downside often leads to people ignoring those conversations entirely.

And I still need to know how to fix the demonstone and how to change weaponranks requirements. Hope people look into it in the future because I for the life of me cannot find stuff like that myself. xD

I`m not sure if this is gonna be useful for you (I think it’s useful for anybody that plays FE8), but I managed to edit a save file to unlock the bonus content menu, I planned to write a tutorial on how I did it and how to edit this menu since it’s not that hard really, but just like you, I have been really busy with life and I haven’t had the time to do so, but in the meantime I will share this save file to anyone that wishes to use it.

Here are the saves:

Some of the saves do not seem to work in VBA, including the fresh savefile. It just says that it cannot open those files.