Emulation Theory is a full FE8 hack rom created by me! It’s more than 30 chapters long and tells the story of what happens when everything goes kind of horribly wrong, serving as a Crossover between Binding Blade, Blazing Sword and Sacred Stones.

"Emulation Theory"? What’s that, a bad parody of an album? 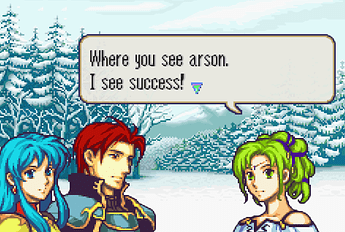 While the story is not meant to be taken seriously, it’s not a full parody, falling in between a serious story and complete nonsense, with far less dialogues than your average game. Note that the hack already assumes you know the events of FE 6-8. Full on playthrough is not necessary, but there are lots of potential spoilers.

The new and the old: What to expect in this excuse of a game 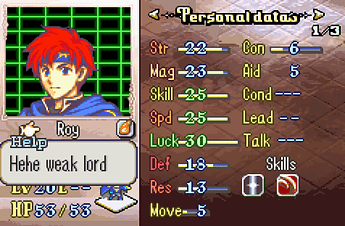 EmuTheory2714×469 54.6 KB
Oh boy, can’t wait to play with my favourite Lord, Roy. Hope he appears early in the game and isn’t forgotten halfway through the story

Credit to the nice people that made some of the assets this hack uses, you made this game prettier
Big thank you to:
The Blind Archer, for the Axe Wyvern Lord and Armor Knight bow animation
Alusq, for the Improved Soldier animation
eCut and Kitty of Time, for the Axe Cavalier animation.
Venno and ZoramineFae, for the Updated Village tileset.
Eldritch Abomination, for the FE6 Dragon sprite.
Pushwall and TBA, for the Bow General animation.

But enough talking, test things by yourself.

Any advices, or critiques? Please let me know! You can contact me via Discord (The Man Who Pets Doggos#4277) Or here, in the comments/DM.

Thank you for reading! And see you next time!

I’m not a native English speaker, so you’ll find some grammatical errors, wording issues and even a confusing plot.
Please report glitches through the game, specially in the most event-based chapters.
Right now, you can only play this on Normal mode, and I do not know if it’s a hard or an easy hack. Maybe I’ll add more difficulties.

Simulation theory is quite amusing, and I like the idea of a game based around that concept.

The grid in coming for yo- wait what?

I hope this simulation won’t try to kill me!

Very nice work! will give it a shot!

After defeating Murray in Ephraim’s first chapter, the game crashed.

I’m sorry that happened to you! I am trying to fix the problem. After fixing it I will have to change the link. Do you want me to give you a separate rom that has the first 6 chapters complete?

I don’t think I need a new save file, just a patch with the fixed version of chapter 7 should do.

Version 1.0.2 is now online! Download here!
The second half of chapter 6 is blocked until I can fix it. Now it ends after traveling to Renais.

Not sure about dropbox, but I know googledrive lets you update files without forcing you to make a new link, if you want to have a permanent link there and just roll out updates.

Good luck with your project!

Might give it a try, i used Dropbox bc I just saw everyone else using it and thought it was the only way. Thanks for the advice!

The second Patch is launched! Adding 12 new chapters, a new chapter 11, and other things! See the Post above to read more about it.
You can download them here! 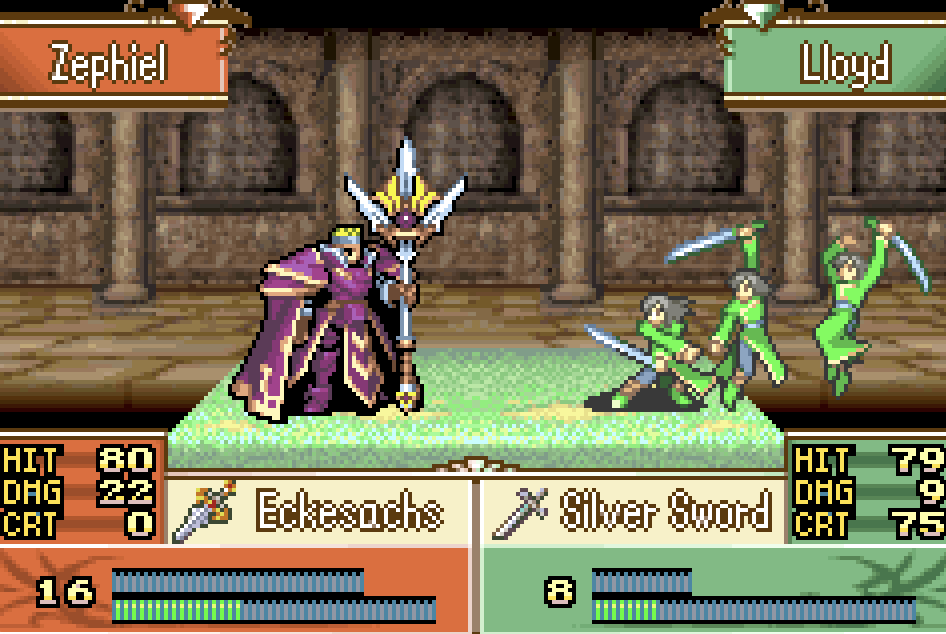 Huh. I playtested that map a lot, and Zephiel always won. Congrats, you’ve achieved the good ending (?
Did it crashed or something at the end?

In chapter 9, it crashed completely for an unknown reason. Happened it on the starting scenes.

Fixed. There’s a new patch which fixes this issue, donwload Patch 0.2.2 and skip to chapter 9. Unfortunately, the stats won’t be the same, and Eirika is at level 1, but if you don’t want to play all of the chapters again you can skip them.

Game’s complete! You can play all 30+ chapters in the link above!
Thanks to all the nice people in the FEU Discord that helped me fix glitches and create better maps! I loved this journey from start to finish

This hack catched my attention, willing to try it ASAP!

gain another one at level 20.

Like promote at 10 and then level up to 10 in the promoted class? No, I don’t think it does. You can learn like, for example Eirika’s skill at either level 20 in her unpromoted or promoted class. Or at least that’s how it worked for me.

I was enjoying this but then i got to ch5 and it was really buggy. I was rescuing the green units during the second stage and then on the third stage they were duplicated, but vanished once dropped. Once i routed that section, the event from completing part 2 happened again. Then there was a particularly big gap (3 turns or so) between the end of the stage and the start of the fourth. And once i routed that one nothing happened.
I used builder to hack a way to win, so i could give more feedback. Then in ch6, the sidequest and the silver sword village use the same flag, so i can’t get both. I need to take a break now. Letting you know of the bugs.