I suppose a dedicated topic is the next step towards making this happen?

This is the google doc folder for the project.

There’s a working plot outline that I’ll be working my way through (which is open-sourced for feedback), and solid(er) spreadsheet with various other docs on central characters and lore.

Sounds very promising I think. Well anyway I hope that you get things moving all in due time but it is an interesting twist on how you are doing the characters. 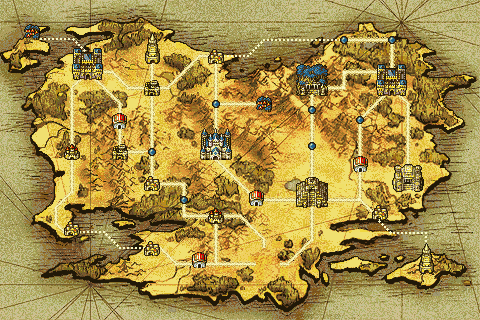 I did a world map mockup in paint out of boredom. The map becomes available after Ch7, starting on that house icon just below Renais with that and the castle as your first two locations. From there you can sort of follow the Chapters tab of the spreadsheet to follow the route progression. Grado Keep is where the chasm is.

Magvel really got the short end of the stick with only one game to the continent. It’s a fun little continent that could use a proper revisit. I’m looking forward to see it expanded on with some new content!

A functional Str/Mag split in FE8.

… this is my true calling.

More realistically, I will say that I have a bit on my plate for AI research and all that, but maybe after that… this is a long term project, after all.

@Crazycolorz5: Of course. The split wouldn’t necessarily be necessary to start development (that’s all T2 stuff when the stats start mixing), but it’s definitely a goal.

And also some brainstormy notes to post now that I’m pondering the final arc:

If you check the Plot Concept Outline, there’s a rough sketch of the game up to the route split. Originally the concept was to do something similar to FE8, where the choice on that split determines the thematic significance of the final arc. Pondering on expanding that with something resembling an alignment system, with two different final arcs based on the choices you’ve made in the game (including the route split). It’s not good/evil typical aligment systems, but between Light/Balance, where one arc culminates in the “second coming of the Five Heroes,” exploring the myths behind the shattered stones and ending with the creation of new Sacred Stones. The other focuses on creating balance and peace in the wake of this prolonged era of crisis, forging ahead into the future rather than restoring the balance of the past. Certain actions add 1 to either Light/Balance counters (with the route split counting for 3), and the higher number determines the final arc.

I’m a sucker for that kind of thing, and I do like the idea. (Along with your ending ideas. Them being “too” reliant on the stones is a very good point to bring up, yes)

I really like that alignment idea if it can be pulled off without too much trouble. Reminds me a bit of SMT IV, if any of you have played that series.
It’d also be nice to see choices with tangible consequences. I’m all for this.

This sounds like a great way to explore the lore of Magvel, including the era of the Demon King’s reign. Not to mention it would really add to the re-playability much like FE8 originally had, granted it would be more robust than FE8’s two paths.