sighs Ok, before I get anyone going “Dude you have 2 other projects…”, one I cancelled and the other I’m putting on hold till(For better or worse) Sacred Overhaul VII is done. because it saves me having to port everything from 7 over myself, and both of us doing it would be pointless. So before I explain what this is, to clarify, Hectic mode is not being cancelled, I still want to do it, its just being put on hold since I don’t want to be redundant.

Anyways like the title(Imaginative I know), suggest, this hack will be focused on porting 6 to 8’s engine. ATM only the Skills patch is planned to be added, otherwise its just the standard FE8 stuff. I won’t be adding new classes(except ones that exist in 6 but not 8, like Nomads/Nomad Troopers.), or anything like that. If you want those they will need to be done on your own,. I will probably keep FE8 classes in(at least one’s I don’t replace), so you don’t have to add those at least.

Charecters will stay the same besides having a skill, assuming I can get the difficulty right. If need be I can buff or nerf when needed.

Like I said its just gonna be 6 ported to 8, I’m not doing anything insane guys.Main reason being this is gonna be a free to edit thing, I dont wanna add or change too much. So for those who think this will obsolete Maiden of Darkness(I doubt you exist but ya know) it won’t. To even try would take like 1000 times the time, and like I said change way more than i want to with this.

I was gonna say something but I forgot it. At the moment my only worry is getting route splits to work, the rest seems easy enough. But that bridge can be crossed when we get there.

Anyways yes, atm I’m planning to do this solo, but if anyone wishes to help on anything, just let me know.

I’ll be starting work myself come Monday. So hopefully by the time I’m finished, I’ll have something to show. Probably not much, but something.

Wouldn’t FE8 having a smaller max map size be an issue?

See I didn’t know that. Eh I guess i can cut the sizes down if need be, I’m sure theres uneeded space somewhere. I really don’t want to, but if need be I will.

Also I changed the name, because I just rememberd someone made a reskin of 8 called Blazing Stones and I dont wanna rip em off. Plus Blazing Stones makes no sense because will, its FE6 porting not 7. I had FE7 on the brain my bad.

Could you implement circles’ skill system??
It won’t be that hard and It will make the game way more exciting!

I’ll be trying to keep same bases, with only skills being diffrent. I havn’t decided skills yet.

How are you planning to hack this? FEBuilder or EA? I’ve got a lot of the work done outside of eventing for a fe6->fe7 port that can easily be copied into fe8. My plan was to put the entirety of fe6 into fe7 and have both games in one but I’ve basically run out of time and one of my important organizing drives just died so my hack is in limbo. If you want my notes it’s certainly possible at this point to put both fe6 and 7 into fe8 as a single rom with plenty of leftover space–even easier to do just fe6.

considering how FE6 is the least story heavy of the gbafes, and that all maps are seize so extra points for being easy to event, doesn’t sound too hard just very tedious, good luck.

Febuilder atm, at least as much as is possible. Just because I find it easier to understand. And if you’re fine with it, sure I’ll take a look, might be something good in there.

No update today, aince I overslept, and my sis took the computer. Lets just say shes a censored about giving it up, once she has it. So if anyone wonders why there’s no progress today , when I said I’d have something, that’s why.

Only having 1 shared computer sucks, especially when the rest of your family doesn’t get the concept of sharing it.

You will see something by the end of the week, even if I have to do it at 1 am, so I can even access it.

Yes, I actually have something to update with this time, I know shocking. Anywheres here are some screens of Chapter 1(still a WIP, for reasons I’ll talk about after): 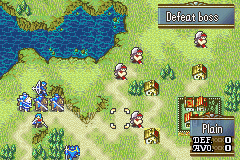 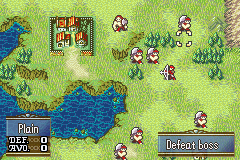 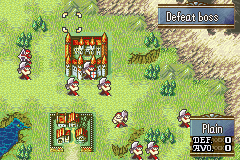 The map. Was pretty easy to get to work, just a matter of ripping it from FE6 and bringing it over, I doubt all of them will be like that, but it made it so I could work on this quicker(which is essential given my limited time to do so). Anyways I believe enemy placement is correct, but if anyone notices anything incorrect about it, feel free to point it out to me. I had the original open in a separate FEbuilder, so I could see where specifically each enemy went, but hey, I’m human, I can make mistakes. 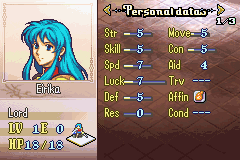 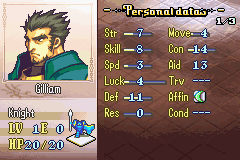 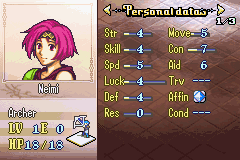 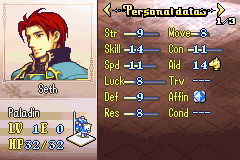 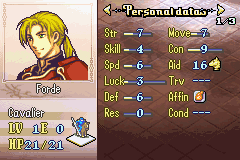 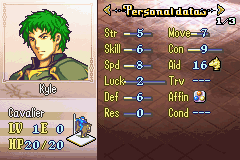 Some unit stats, they should be correct as to who they are replacing atm(Seth=Marcus Eirika=Roy Forde=Alan Kyle=Lance Neimi=Wolt Gilliam=Bors), no the portraits aren’t replaced yet, that is tomorrows goal. Well…after fixing some issues I was having, portraits aren’t top priority ok? Anyways feel free to tell me if any of these are incorrect(I used the wiki for em so I wouldn’t be surprised if its not 100% accurate). Also you may notice the skills patch isn’t in yet. I just felt like getting a few chapters DONE first, then adding it in. Speaking of skills, if anyone’s got some ideas for ones from the skills patch that would work for the characters, feel free to suggest em. I have some ideas, but I’m not 100% on em yet. Also I will not be implementing custom skills most likely, I’m sure its not that much work, but tbh I’d rather focus on getting the game implemented, instead of spending time trying to get custom skils to work. 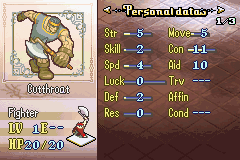 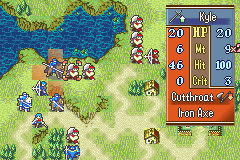 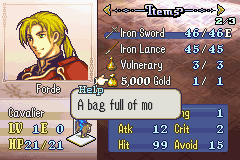 These last three are just misc ones. Showing off enemy current stats(Which I might adjust we will see), the fact Kyle doubles and does not kill(kinda like how lance does in the orginal game on normal(which is what this is on), and what the first village gives you. Yes I’m aware that the FE6 one gives it in liquid cash and not a bag, but I need to figure out how to do that still. By the time of release it will do it though, that I can assure you.

Anyways, so what are the issues so far:
-Still need to remove the intro events from 8, I should have done that FIRST, but I wanted to work on this first.
-Defeating Damas(aka O’Neill), still ends the chapter. I have the seize objective in, but I clearly need to change something, I’ll figure out exactly what tomorrow
-Seth still says “All that’s left is there leader” after killing all but the boss, that’s an easy change, I know how to get rid of that, its just kinda like the intro events ,I didn’t do it yet.
-The bandit on the map gets stuck in a loop. The intro events for the story aren’t in yet, so the first village isn’t destroyed. He just goes after that village and since there’s no tile change associated currently, he just constantly tries to destroy it and fails. I tried to get him to just go after the bottom village, but I couldn’t figure out how. Something to fix later is all.
-Some enemies will just walk up to your units instead of engaging em in combat. I don’t know if this is just an FE8 thing on I messed something up in the AI, because not all of them do it. And its also seemingly random when they do. Also they still attack after this, they just choose to walk up, stare, then attack next turn. I dunno whats causing it, if anyone does, if you know how to fix it let me know.
-Currently the enemies are all set to move towards you immediately, this is just for testing mainly, since having them just stand there would be very boring. I am pretty sure I know how to get em to move once you enter a certain range, I just gotta implement it.
-Potraits need to be changed. Like I said not top priority.
-Need to change the Village to give you liquid gold instead of a bag of it.
-Most important I need to do the events for everything. I’m leaving this till last, because I have to make em all from scratch pretty much. Since I think If I just imported the events from 6 it would completely break the rom since they are setup differently. At least if its like 7 to 8 is. Not too hard, just time consuming.

Anyways, yeah, thats it for today. Sorry for the slow progress, I’m just making do with what I have to work with atm. I wouldn’t expect this to get done insanely quick because A) its one woman working on this, and B) I have at max 4 hours(if I’m lucky) a weekday to do this, and C) I’m still a novice, so its not like I already know how to do it all and do it quickly.

Anyways thats all I wanted to say for today.

Still need to remove the intro events from 8, I should have done that FIRST, but I wanted to work on this first.

Actually, there is a patch on FEBuilder that does that

Oh really I’ll try it then, thanks.

Cool project idea. Looking forward to watching your progress. Something to consider: if your goal is to make a base game for editing by others, consider keeping a separate version that does not yet have the skill system implemented.

I’m shocked by how nice the map looks when using the FE8 tiles.