"You are an ocean of waves
Weaving a dream
Like thoughts become a river stream
Yet may the tide ever change
Flowing like time
To the path, yours to climb"

hey, wait a minute those aren’t the official lyrics! 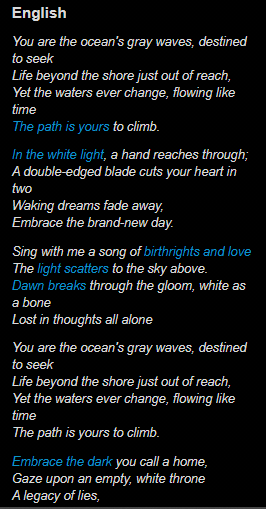 hey, wait a minute those aren’t the official lyrics!
it is pretty funny though that google uses unofficial lyrics from a cover instead of the actual lyrics

yep, but have you ever heard AmaLee’s version of the song?
it’s actually pretty damn good, to the point i prefer that version rather than the original one in english.

yeah I’ve heard the AmaLee one, I actually prefer it as well, it just flows a bit better in my opinion, the official lyrics just feel a bit… stilted in terms of delivery? Maybe it’s just me…

i’m drowning in a sea of OCs…here’s “Lancelot”:

could work well as a Great Knight. or anything else that wears heavy armor.

“Now I’ll show them what I can really do.”

here’s Alm from Echoes, being a badass in his promoted Conqueror version.
took me quite a good while to polish and complete, but i guess it was worth it after all.

another OC of mine, “Shin”:

could work well as a myrmidon. 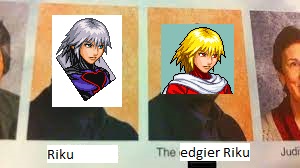 that’s right, and you haven’t seen yet Marlu- i mean, another one of my OCs, “Heiken”:

could be a swordmaster, or in terms of Radiant Dawn, a Trueblade.

That’s where I saw the artstyle! Man chain of memories GBA was weird, it looked great but the gameplay is like Yu-Gi-Oh if you took away the fun of it and only left the complicated rules

Man chain of memories GBA was weird, it looked great but the gameplay is like Yu-Gi-Oh if you took away the fun of it and only left the complicated rules

kind of a grinding game rather than a real “beat 'em up”, since all you had to do was get in and out of rooms to farm currency in order to buy high lv cards and break the game.
the gameplay, while being flashy and cool at first, was all reduced to just spamming 3 Cloud summon cards together over and over against any enemy, since that strategy worked 100% of the times.
at least Riku’s route had some “forced” variety in terms of preset decks, so you actually had to think before playing your cards.
overall, it was an interesting title for sure, although not that great in terms of gameplay.

kind of a grinding game rather than a real “beat 'em up”, since all you had to do was get in and out of rooms to farm currency in order to buy high lv cards and break the game.

oh duel academy, a perfect representation of the childhood yugioh experience, repeatedly duel against the same people every day, expand your deck, and watch as your friends fall behind because they don’t get an allowance…

The DS one, Nightmare Troubadour, was pretty good though, although the decks the other players have are… a little bullshit to say the least…

here’s my last OC, “Rei”. working either as a thief or assassin would do:

i will probably make more of these when i’ll be inspired enough, since working on sprites everyday for more than a week has kinda burned me out lol.
meanwhile, i’ll be searching around for other pixel backgrounds that can eventually be used as GBA assets.

i’m about to finish my first playthrough of FE Radiant Dawn, and to be honest i really loved it so far, even more than Path of Radiance for different reasons, to the point it has actually become my favourite title from the entire FE franchise( sorry Genealogy, you get 2nd place ).
in any case, since there’s already a good amount of PoR/RD mugs in the repo, i decided to work on something else that is still related to those titles.
after a couple of hours, here’s the battle UI inspired by the Tellius saga: 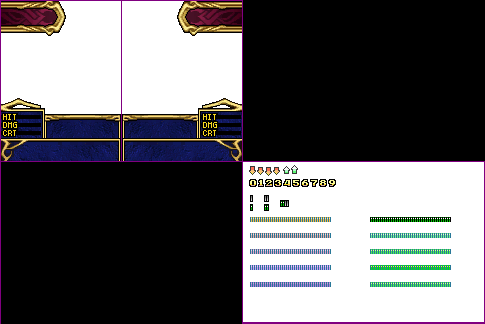 i’ve edited the original sprites from the system menus while trying to keep the same high contrast in order to make all the little details pop up.
maybe a lighter tone of colors would have made it a bit more “morbid” to the eyes, but i guess this can work as well.

since i love Type Moon animes way too much, i’ve decided to work again on some stuff i previously made.
this was meant to stay hidden until another topic in the contest section showed up, but since that section is apparently dead, i thought “eh, whatever” and decided to make it public anyway.
so, without further ado, here’s Saber Alter from Fate/stay night( the last 3 movies about the novel’s darkest route are frickin’ amazing! ):

also, here’s some battle stances too, for both the original concept and Alter:

» with visor( because why not )

the base sprite would actually be Lyon from FE Sacred Stones, by the way.

just made a thing inspired by Langrisser for SNES: 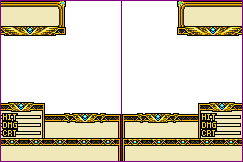 if you’re looking for an egyptian battle UI, i guess this one could do the job.

made a thing while testing animations for fun.
remember that Saber Alter i did a while ago?
well, this is her summoning her noble phantasm( sort of ):