And now, we are almost come into full circle in this year’s FEE3.
Time to go mourn the fallen ROM hacks that didn’t make it to its conclusion and fridged into Obscurity. If only we can find a certain ROM hacker will carry the mantle of the ROM hacks that deserves a conclusion so the creators of the ROM hack can pass the torch to them and complete their long time dream.

We lost a true “hack good” 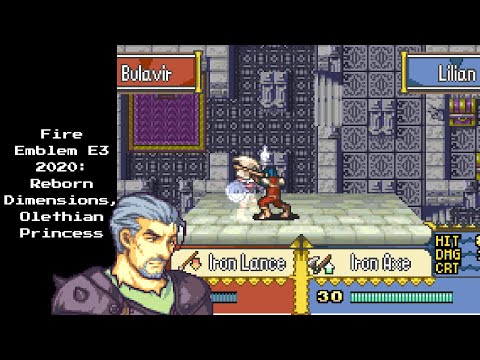 Those of us who have been around since the early days of hacking may remember a lyn mode hack called “Different Dimensions Ostian Princess”, focused on Lilina’s fictitious daughter, Lilian.

RandomWizard, like any modern movie studio executive said, “Well, what if we remade this?” - and so they did.

I don’t think people are surprised when they see community members attempt to remake, demake, or reimagine vanilla FE games, but this is one of the first projects we’ve seen where someone aimed to reimagine a hack, especially one as overlooked as DDOP.

While I wouldn’t call this remake particularly faithful, it does include and reference enough source material to fit the bill in my opinion. It’s a neat project, and if you’re interested in remaking an old hack, take a few cues from this one.

So video game industry practices have come to hacking? Then by the 2030s we’ll be able to play The Last Promise Definitive Edition with original “You can do it.” audio clip available as DLC for the low, low price of $3.99.

(Joking of course. No offense meant to RandomWizard or their hack.) 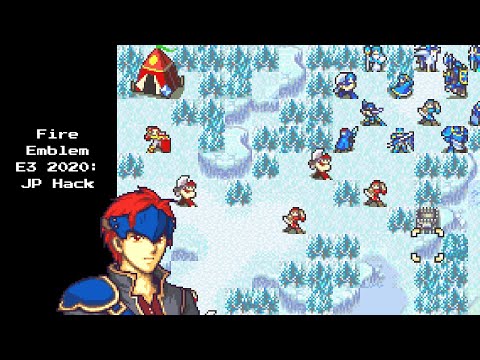 While Japanese hacks aren’t often featured at FEE3, they’re well-known to western hackers for their crossover characters, references to other FE games, and general zaniness. I’d look into Yggdra Hack, Kaitou, Queen’s Sword, Two Princesses, and Midori to get a sense of what I’m referring to. If we take a broader look at The East in general, ChinaFE: The Will of Good & Evil is a classic.

JP Hack attempts to capture this feeling of playing a Japanese hack, all while not leaving the comfort of FE8U.

In addition to its funky concept, there’s a lot of custom art and tech, and many of the maps have funky gimmicks that make playing JP Hack unlike most. Having played a few Japanese hacks, it’s pretty neat how well JP Hack captures their essence.

On a more personal note, this is probably my favorite FEE3 LP that I’ve made. It was fun to record.

I’m working on the eventing to add lootboxes to my next project. Just you wait. 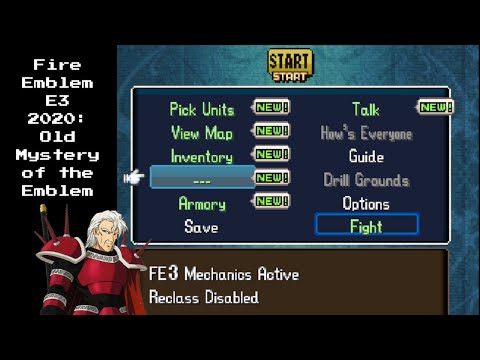 FE12 is cool, but that’s generally in spite of many of the things FE12 adds to FE3 book 2, like the prologue sequence, random bonuses from talks, the drill grounds, reclassing, and new characters. While many of these are personal grievances with the game, the most universal of these is the avatar, Kris, who manages to steal the spotlight away from Marth, and lay the foundation for all self-inserts who came after.

Darrman said, “well, what if we had all of the gains of FE12 like a slick UI, all the cut characters from original book 2, and we got rid of Kris?” Lo and behold, this is what we have.

As a Fire Emblem fan, sometimes I need to do a sanity check to make sure I’m not the only one who feels a certain way, but I sighed in relief when I saw I was not the only one excited about FE12 without Kris lol.

While I’m not a fan of most of the changes made to the game other than the Kris removal it is cool to see an FE12 hack for once, and if it gets people to play the amazing game that is FE12 who am I to judge?

Man if only Kris was a Well-written self-insert character that does not take up the spotlight, maybe, just maybe, we wouldn’t treated him too harshly than what we credited for.

I’m still shocked we got Robin AFTER Kris, sure Robin isn’t a perfect self-insert but they’re by far the best… Then we got Corrin… HOW!? I don’t understand these games at all…

@theghostcreator Then we got Corrin… HOW!? I don’t understand these games at all…

Neither does Intelligent System, don’t know what’s going on in their minds when they came up with Corrin, they could’ve stayed on the not-so-perfect route for self-inserts instead. 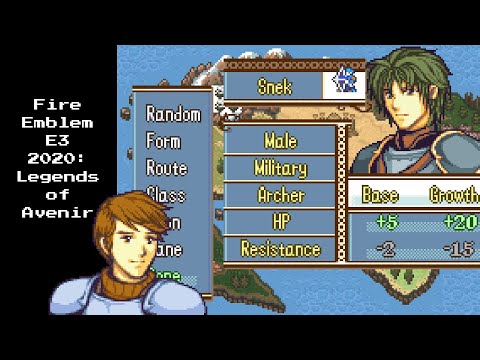 Route splits are often called “hack killers” in the community. The time dedicated to creating alternate paths for players is often seen to be better served by completing one, cohesive tale, instead of trying to reconcile and balance multiple versions.

For Legends of Avenir, the game is the route split.

Probably one of the most technically interesting and complex projects out there, LoA focuses on a number of stories characterized by route splits. There’s neat customization options and multiple paths to take within a route, helping with replayability.

It’s neat to see different formats and structures in FE hacks, and if you’re interested in seeing some neat tech, getting some structural inspiration, or playing a game where your choices actually matter, check this one out.

Making a Route split in your FE ROM hack can be time consuming and results in giving up your dream hack.
But in Legend of Avenir, that saying is completely different. 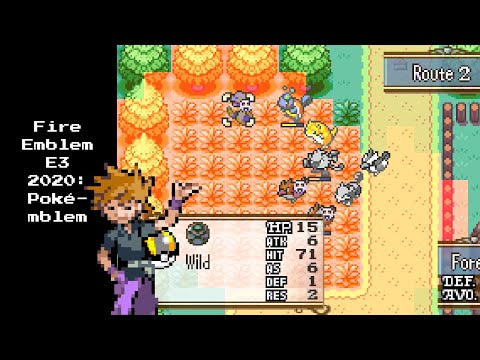 Fire Emblem fans and Pokemon fans are generally not too far removed from each other. As two of Nintendo’s larger RPG-ish franchises, it makes sense that fans of the more obscure FE are fans of the largest multimedia franchise on the planet.

Pokemblem is a lovely mashup of the two franchises, and its neat to see how Vesly is recreating Pokemon Gen 1 in the engine. Making a Fire Emblem hack in an FE game is hard enough, but can’t imagine the level of effort that goes into re-skinning and re-working everything to better fit the idealized “Pokemon on a grid”. 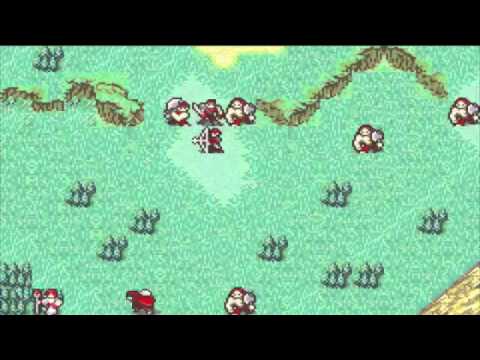 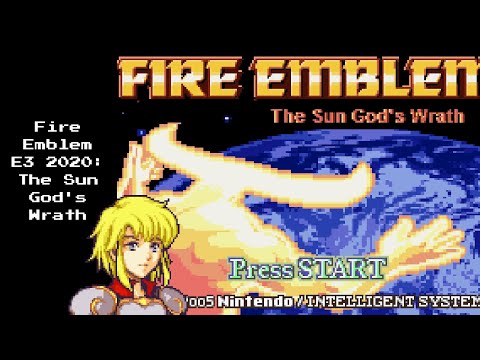 The Sun God’s Challenge, excuse me, Sun God’s Wrath, was in and out of development for a long time. SGW is well-known for using almost everything the community has to offer. I think almost every skill, icon, animation, and asm hack found its way into SGW.

One of the things I like about FEE3 is that we get to see the progress and how we perceive each others’ work over time. It’s both a celebration and archival of our efforts, and I’m glad we have a consistent tradition. It was a treat to get to record this last year and close the book on its development.

FEE3 starts in a little less than 48 hours, so I’ll end my mini blog post thread here for now. Next year, we’ll continue to hype up next year’s show by waxing poetic about the showcases in FEE3 2021.

Thanks everyone for viewing so far and I hope this sample of showcases has you looking forward to the big event.

Keep an eye out here for 2021’s schedules and videos. Thanks all.

Long ago, I actually did try to have every animation/possible class available in the community (there were just enough of them at the time for this to work, unlike now to show how much the animation scene has grown) in this hack. It was at this time I made the FE8 versions of some FE7 animations in the repo and reported some bugs with other animations that some people I don’t think ever really noticed at the time lol. I really did try to put and use everything I could so that the people who have worked hard in this community could see some kind of product where their efforts paid off. But that was coming from the mentality of someone who’s spent so long in the hacking community that they associated the scene primarily with unfinished products, something I think we as a community have moved on from at this point.

As an aside, I guess I have good timing since I came to this thread after so long wondering when FEE3 will start and now I know how soon that will be to my shock! I’m really looking forward to everyone’s hard work this year!

Props for using FE8 before it was cool

FE8 is a bad engine, far inferior to FE7. It will never catch on in popularity!