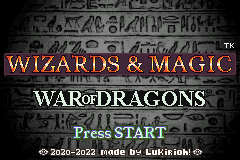 I don’t know how to start
I can’t believe this yet
Well, I’m so nervous to announce that
Wizards and Magic: War of Dragons is now released!!!
We have done just the prologue at the moment but the project it’s planned to have more than 20 chapters.
Through my limitations and country’s difficulties I have finally made this project playable at least.
I know it remains a long path to travel in the development of this project,
But when I look back at what I have made I noticed the enormous amount of stuff we have made. So I can’t give up on this. After all, this is one of my precious dreams.
Thanks for supporting me and for be so patient waiting for every new little progress of WnM.
I hope you like this project.
Please if you want to comment something you can reply here or go directly to the discord server where I interact more with the people.

Please if I am missing someone contact to me by direct message. I don’t want anybody out of the credits.

I feel threads like this would be incomplete with some screenshots to get us all hyped for your project. Mind adding some, if you can?

Sorry this is my first time making a hackrom so I don’t know what kind of screen shots should I post.
But I will see what can I do :3
See you later with some screenshots
Thanks for the advise.

I posted the recent update of the project with the change log and also some screenshots.
I hope you like them ;3