I’m super open to tips and general advice. I am still learning when it comes to modding, so feedback and modding tips are welcomed. Might do this for FE7 too. 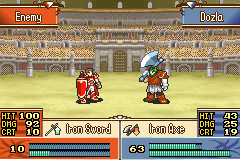