I’m working on a monster (a Lich) that can cast Dark Magic, Monster Magic, and use Staves.

I’ve scripted everything and the issue arises when I test it.

When I’m close up all the animations play fine, when the class tries to attack from a range, the game crashes right as the battle starts (complete with a horrid screeching noise!)

Is there anything special ranged attacks need that regular attacks don’t?

This matches up with what other spellcasters use when looking at their custom animation scripts too, so everything should be correct no?

I’ve removed all sound effect codes on the chance one of them was causing an issue.

The animation displays in FEBuilder just fine, and I can even test it in the Animation Editor just fine too.

The only thing I could think would be causing an issue might be the critical frames, as there are close to 30 of them (though only like 5 unique poses).

I’m no expert, but that looks like it should work. Maybe something happened with your mode 11 (equipped with ranged weapon)?

Are your ranged attacks identical to your close-range ones?

30 frames in the crit shouldn’t be a problem assuming the animation imports without complaints, but you could always cut out some of them and see if it works better then.

If you can’t figure it out, it’s better to upload the whole thing so it can be looked over in detail.

Here’s the file in it’s current form (sorry if it’s a bit messy, been trying so many things to make it work).

That’s odd, i can download it but can’t open the archive. Files hosted on google often give me trouble though - do you think you could try uploading it somewhere else? Like dropbox or mediafire?

Here ya go, this should be all ready for FEBuilder Insertion.

Welp, can’t open this one either. I’m out of ideas, then! Hopefully someone else can give it a good look.

Yo I think the issue is with the mode 11 of your script (the equipped with ranged weapon mode). Your script contains 2 codes that shouldn’t be there ( 3 and 7). I simply removed them and the animation worked. 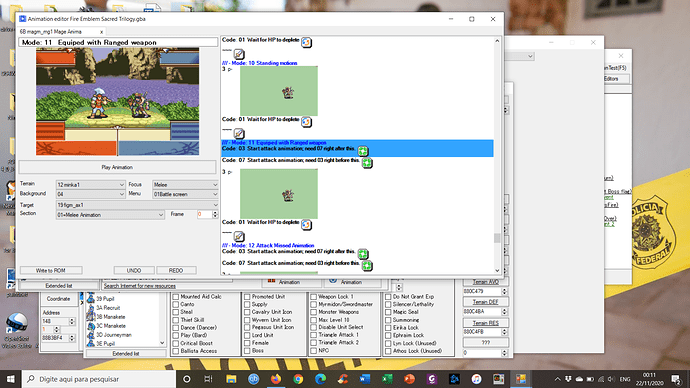 I had been staring at it for so long it stopped making any sense to me!

Now to go back and adjust all the timings and add back the SFX!