Project is still in the works, but proceeding slowly due to work and life and whatnot.

Please click on the arrows below to reveal details of the title subjects. Last updated 11/28/2021 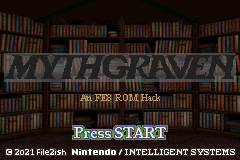 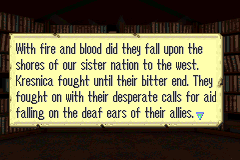 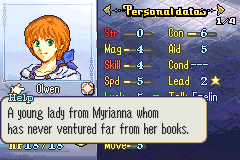 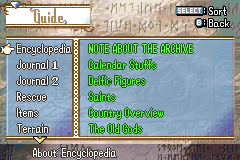 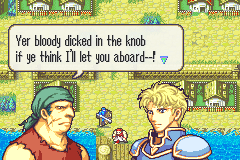 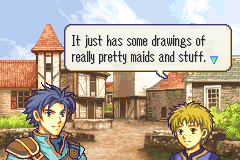 Idk what to say, but for he screenshots It looks good

Im excited for this thing, I hope this will be out soon (no pressure HAHA😅)

Work’s been kicking my butt lately (11-12h shifts lately cause OT is needed) so progress is slower than I had expected, still trucking though. Spent more time making some FFXI tracks work than anything else of late because of the overtime. Has been a huge pain and time sink trying to get the instruments right and figuring out which tracks can be removed while still having it sound right (some have more than 24 tracks, and many won’t work because of it.). I need to spend more time writing/eventing lol.

I hope to get a build with the first 4 or 5 chapters out at least to get some feedback in the next couple months. Anyway, here’s an example of the music: 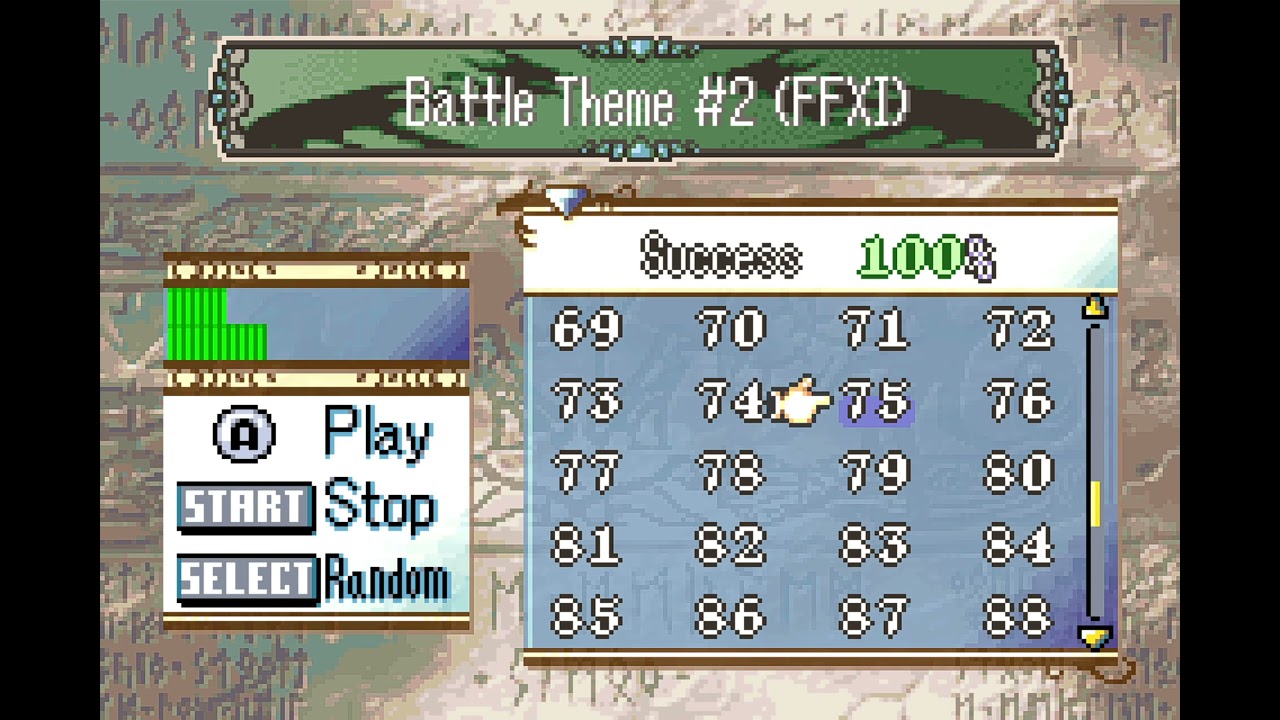 I can’t believe this has been made into FE8…any other inspired FFXI tracks to possibly make it? Sanctuary of Zi’Tah Heavens Tower?

They’re direct from the PS2 sound files (can’t get midis from the PC version .dat files to my knowledge). I never managed to get VGMTrans to work myself, but I managed to find a download from someone who went through the trouble of doing it all for FFXI (credit in video description). The midi instruments are all wrong since the game uses a certain soundfont, and a lot of the tracks can be several octaves too high or too low. Kind of a pain, but worth it!

So far I’ve been able to get quite a few which will work fine in FEGBA. Zi’tah sadly has 32 tracks, so without significant work will be impossible (was the first song I wanted to use…). Selbina is missing a key track as well for some reason, which made me sad.

Got quite a few going. Just off the top of my head, I’ve done: Battle Theme 2, Battle in the Dungeon 2, Hume Male, Mhaura, Repression, The Grand Duchy of Jeuno, Ru’lude Gardens, A New Horizon, Whispers of the Gods, Vana’diel March 2, Rolanberry Fields.

Seeing the names of those tracks give me an overly nostalgic vibe.

Just a short update since I haven’t done one in a fair while:

Work is progressing slowly on this hack, as ever. Sort of on the back burner at the moment with life and other things taking my time and attention. Work, adulting, and whatnot. Also GG Strive and FFXIV… Oh and FFXI is gonna have a return campaign… And SF5 is getting a Rival Schools rep and-- Yeah…

I occasionally jot down ideas and notes and stuff when they come, just a matter of time constraints and balancing what I want to focus on with my free time. Which, of late, has been actually completing a relic while it’s relevant in FFXIV and mixing people up with Millia in GG.

Motivation for making this thing is not gone by any means, but I did say it’d be a slow process for me.

Here’s another song in the mean time. 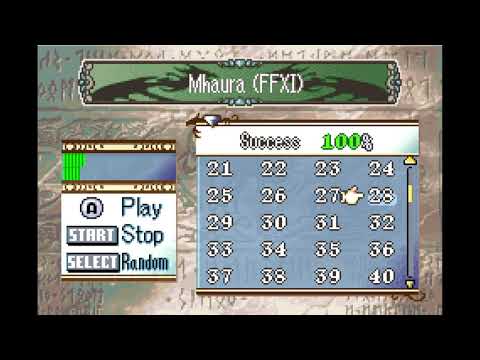 Updated the original post.
Updated screenshots
Added some details about the story/plot.

Not quite ready to release a demo/first chapters yet. Working out bugs in eventing and adjusting writing until I like it more (I’m not quite set on the opening game text yet, but I posted it under the Plot details. It’s subject to change). Nearing the point of an early build though, I think. Hopefully by the end of the year.

I’m annoyed at myself for not releasing any builds at this point. Haven’t worked on the hack itself much lately, been trying to piece story stuff together and plan it out more than I usually would. Sick of disliking the progress and starting from scratch >.> Happy with where it’s at right now for the most part, but I want to solidify things more for myself before committing to a release build, even if only a 3-4 chapter demo (or 5-7 if gaidens count).

In the meantime, here’s another FF11 song I made work in it. Not sure where I’ll put it, probably in a later part of the game. But it was something to do during writers block time while still wanting to work on the bloody hack. Wings of the Goddess nostalgia right here. 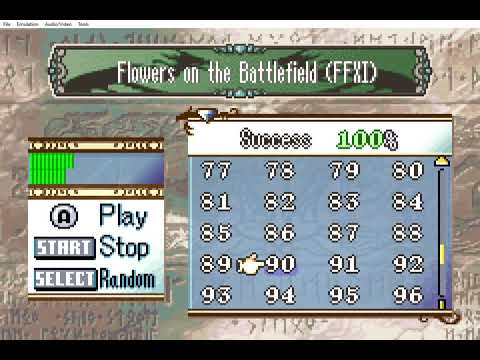 The project’s first demo build is linked in the main post.

Build contains 4 chapters (prologue-chapter 3) and 2 interludes (dunno what others call them, rest chapters?).

It’s not as polished as I was intending it to be at this point (I am not happy with chapters 2 and 3, I’m well aware they need to be reworked), but I said I’d push to get it out before the end of the year and I figure I need some feedback on the project thus far.

That and if I don’t push it out now, I probably won’t before the end of the year with the holidays coming up. Busy time of year as you all know. Also Endwalker.

Can’t promise I’ll update this often, and my snail’s pace of work will likely continue, but I will still be working on this project for the foreseeable future. I’m only really planning on releasing builds when I’m happy enough with them. Hopefully you all enjoy it!

Oh hey, it’s been a year since I made the original post. Ha! Just swinging by for an update on the project:

At current I haven’t had much time since posting the patch file a couple months back to work on it. At current, work and life and whatnot are taking precedence. I’m still planning on continuing this project, but for now work on the hack itself will be on an indefinite hiatus.

I still will likely be working on story bits and outlining stuff for it in some of my free time, but it just may be months or longer until start working on the hack itself again.

Just a quick update on the project: It’s not dead, but the game likely won’t be getting any updates any time soon.

Trying to make a more structured story than how I’ve generally done my writing (i.e. I found out the hard way that writing as it comes to mind, editing later may not be the best way to approach writing for me). I’ve never finished anything the old way, so yeah; structured approach it is.

Leaving the demo up as is, I’m still proud of it as it is despite its many flaws. It’s my proof of concept. And I have many changes to the story in the works since the demo build. But before I dive back into working on the romhack project again I’ve a lot of legwork I want to put into writing the story. Basically getting story and worldbuilding done first, making the game second.