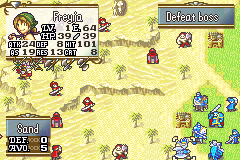 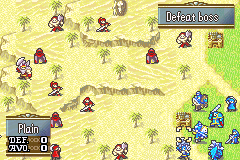 I’m not sure why that happens. I have the female warrior sprites inserted and mapped to the class, but it doesn’t seem to matter. I’ll experiment, thanks for pointing this out.

While I’ll have to put a disclaimer first and say that I was playing on Hard Mode, a difficulty it is more than possible this hack wasn’t actually designed around, I’d say the biggest problem with the game in its current state is that the units just aren’t particularly fun to use. The general focus on de-inflating stats and growth rates has resulted in a large group of units that kind of feel same-ey, not helped by the fact that their skillsets by and large don’t go toward creating any sort of playstyle or niche for them.

Additionally, combining for kills on enemies is just really awkward. A number of times when on the first map I was confronted with situations where my units were just 1 damage away from killing an enemy that was blocking the way forward. I do have to question the logic that went into sticking two one tile chokes between the players and the escape route in the first chapter - like, seriously, that’s just asking for a bunch of frustrating resets given that you don’t really have particularly reliable ways to plow through all the enemies at once on playerphase.

On the second chapter, I mostly just feel like sticking archers in the fog of war near the enemies closest to the Peg Knight when she spawns, when there are no torch staves available, and it’s either unlikely or outright impossible that you can actually see the archer coming… Is a bit of a dick move. It’s punishing the player for taking the most intuitive action available to them, and I think that, as a design choice, is a bad one in general.

Either way, I’ll have to play more but these are just my current thoughts.

Thanks for sharing the feedback. Appreciate you taking the time to pick up the game.

Hard mode has not been tested, and this is stated in-game. For now, the game is designed around normal and I’d recommend playing that. However, I’ll warn that normal mode in VQ is probably at the level of hard mode of most other western FEs. Put another way, I’d say normal is probably a notch below FE6 hard.

Easy Mode is much more like vanilla normal if that’s the kind of FE experience you’re looking for. The enemy stats are much lower and do not scale nearly as much.

As a design choice, I tried to mitigate the amount of one-round KO’ing in the early game. My view is that if all of your units can one round, the game gravitates towards mounts being extremely dominant, and niches of units become irrelevant. This is something I disliked about vanilla GBA (especially FE7/FE8), and wanted to avoid in my own game. As the game progresses and you get better weapons, your units level up, etc. one rounding becomes more feasible on a regular basis. But the game is built around having good matchups, and early on, you don’t have very many of them.

Would be helpful to understand more about what you mean by “fun to use” as well, since it’s a subjective measure and we all like FE for different reasons - curious to hear your take.

yeah I noticed the statement that it was untested after getting done with chapter 3 lol. It was mostly muscle memory putting me on HM to begin with - i’ll have to try on normal next. It wasn’t really that hard mode was particularly hard, it was just exceedingly tedious.

A unit being “fun to use” is typically a difficult thing to define but here’s my shot at it - when a unit has very clearly defined strengths and weaknesses, and said strengths are enough to make them feel competent. Pegasus knights should generally double the majority of enemies, same with Myrms only in their case it should be combined with high crit rates - you get the idea.

Generally speaking, when you’re given restricted movement or you don’t deal much damage to the enemies then the gameplay quickly grinds to a screeching halt and gets very boring. You want to be always acting.

Now, while the units might feel more different and be more useful on Normal Mode, on Hard Mode I was having difficulties combining for kills on the vast majority of enemies even using just the Jagen and one other unit; and what this would typically result in was, given the fact that there were an abundance of small chokepoints on the first chapter, a bunch of enemies with 1hp getting in my way on the next turn. Which, really, noone likes having to deal with.

As for ORKOing being bad… I didn’t even mention one round KOing, so I have no clue where you’re getting that idea from. I said that it was awkward combining for kills, which might be a problem fixed on the game’s normal mode. (Although, enemy bulk inflating noticeably earlygame between difficulties is generally a huge no-go)

particularly reliable ways to plow through all the enemies at once on playerphase.

^^ conflated this with a desire to ORKO, but my apologies if I misunderstood.

Fair points and critiques. Again, hard mode hasn’t been tested at all, but will keep in mind as I go through and work on it later in development.

The hack is good so far. I’m playing on HM and I find the difficulty to be reasonable (hard but not too hard). I just finished Chapter 7xx and I liked it.

The only thing is that I would change is that I would rather have Gunnar as a lance/magic unit instead of a sword unit just for balance. By chapter 7, you would already have 4 sword units (thief, peg knight, brawler, sword cavalier)

Thanks for playing and glad you’re enjoying. Hard mode isn’t tested fully yet. It may become unfair but shouldn’t be unbeatable, but the game is designed around normal right now.

As for Gunnar, totally get that, but you’ll get some other units to fill those roles pretty soon.

I plan on recording for FEE3 either this weekend or next depending on when I can make some updates/fixes to the build, as well as how things shake out with some personal stuff going on back home.

Thought it could be neat to do a Q&A at the end of the showcase, here is a link to the form if you’d like to submit anything:

I think this is a bug, but Lera and Marlen can use each other’s Prfs: Lera can use the Brother Sword and Marlen can wield the Wind Tome. Screenshots are attached down below.

Edit: Added a pic of what happened after a round of combat with Marlen using the wind tome.
He became a magic user.

Good catch - I think it is because of how I set up their prf weapons… I’ll need to investigate this and tweak ahead of a new release. Thanks for pointing this out!

Titus, Larisa and Esfir have the same weapon lock as well, but this time around I wasn’t able to have Larisa nor Esfir wield the Dire Thunder, whereas Titus and Esfir can wield Father’s Love: both of these weapons use the same weapon Lock, Lyn Lock, and you have set Lyn Lock all three characters.

As a side note, I prefer the mage Marlen over the sword Marlen. His damage output basically increased by 1,5-2x compared to when he was sword-locked. It was so much easier for me to level him up.

Is the best way to fix this to change the required weapon level? I think it removes the prf mark, but will at least allow me to use the same lock, right? Would need to test. 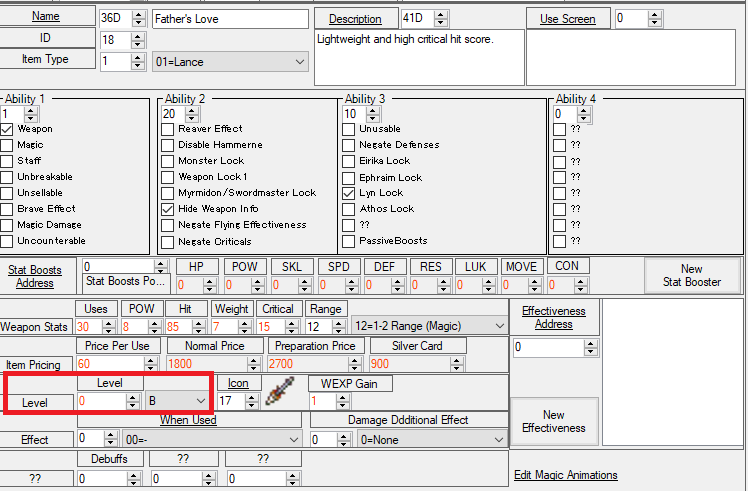 Yeah, that makes sense. I wanted to keep the prf mark, but since I do not think I can expand the amount of prf weapon locks, this works. Thanks for helping to troubleshoot.

I think you can use the Weapon Lock Ex patch to make the weapons actually locked to specific characters, without having to add a specific weapon rank? Don’t take my word for it, though. I’d have to go check.

I updated the skill system in Builder, and Scraiza is helping playtest 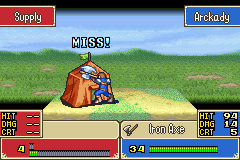 In real news, the skill system did unfortunately and unbeknownst to me, break my save at endgame, which is a bit troublesome for testing, but does provide an opportunity for me refine the game and take advantage of some of the new features the latest update offers, such as items with skills. Stay tuned for more updates!

Thank you, @Kirb, for helping set up this new stat screen!

The latest skill system update includes leadership stars, which as a Kaga fanboy, I will figure out a way to use.

Expect this and more in an upcoming release. Timing TBD, but want to get the fixes out there since a few (small-ish) things were redone since the latest public patch.

I only added one thing

But it makes a difference!