Also join the Discord Server for insight into development, behind the scenes info and much more.

Patch on a clean ROM of FE8 (U). Last updated: July 18th
Normal mode is recommended. 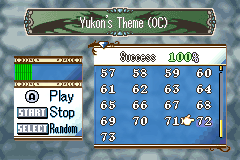