Please tell me your thoughts on the hack and what you think needs changing or what you appreciated or didn’t.

This is basically complete I don’t really know what else to do with it other then improve the graphics and fix bugs.

The reason I give bosses more than one weapon sometimes
is because the weapon durability is low.

High defense or resistance units have more HP to compensate for 30 being the def and res cap.

All three difficulties work so you can choose whichever you want, but I recommend starting with the Normal difficulty.

Most of the hack’s changes:

You should patch a clean FE8 US rom with a UPS patcher like NUPS.

The Sound Room is already 100% unlocked.

Growth rates can be displayed in game by
pressing Select on the unit stats screen.

Support bonuses that gave +5 give +2.

You can hold L to disable animations.

In CH 5x all allies start with the Easy Mode
weapons I strongly recommend you
keep them until CH9 if you play difficult mode
just in case but if you if you don’t want to play
easy mode drop them.

There are OP Easy Mode weapons available
in the preparation screen armory for free,
be sure to drop them when you don’t
want to play easy mode
anymore.

Mansel is supposed to heal with the Fortify I don’t know why he doesn’t.

You can go into the Guide menu command for information on how to use the Sus/Bck command if you don’t know how to use it.

For some reason the UPS Patch was corrupt redownload to fix it.

Do you have any screenshots?

any screenshots or description of the hack’s story? the name itself makes it sound interesting though

This is just FE8’s story with changed gameplay, I don’t think I need to include screenshots since there isn’t anything new story-wise.

screenshots exist to let people know what they’re getting into. If the gameplay is different, show us with screenshots, couldn’t care less about story

You should probably include screenshots even without story. If you don’t show off some of the big changes you have made from FE8, not as many people are gonna play it.

It says the file has been taken down.

@Hero
Welcome to FEUniverse!
@DarkPrinceRick and Hero
Sorry about the link it’s back up and the game has been updated.

Thanks for the feedback on the screenshots I have uploaded some now
I also updated the game with numerous fixes and improvements that should have been in V1 in the first place IMO so I strongly encourage updating.

Please let me know what you think of the hack’s gameplay.

I read a bit of your thread beforehand and because i was in disagreement with most points, i decided to give your work a try and started a hard run. I stopped after seeing Chapter 5x to write about my thoughts. I will start saying that i do not intend to launch the game again in this state.

It is pretty obvious that you didnt playtest hard mode at all and while normal mode looked bearable at best, though I didnt look past chapter 1, there is a big issue with bases in your hack. I will use two easy examples to point that : 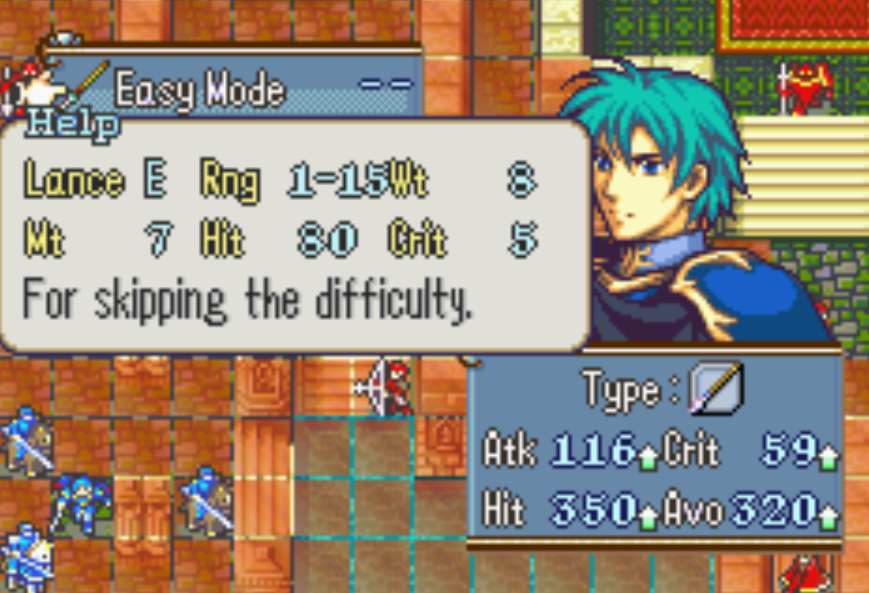 Finally, what is the point of “skipping the difficulty” in a tactical game and why would you recommend using them? Is it “Easy Mode” or should they just be called “Dont Play This” ?

I would gladly hear about your process on rebalancing SS (why, how and to what purpose) because your hard mode definitely does not work.

having the wyverns with low resistance caps is nasty work lol

I designed my hack starting most units off very weak and requiring help from Seth to become stronger especially the main lord, and especially on Difficult mode.

So you should use Seth to weaken enemy units and then use the other characters to finish them off and gain EXP to level up.

I got the idea to do it like that from FE Echoes in the game Lucas tells Alm “Without experience, your friends will never grow into accomplished fighters Trust them. Give them something to do. …At least let them deal the final blow.”

While Franz, Gilliam, Neimi and Colm can hold there own in defensive gameplay in the beginning chapters they do become weaker later on so I highly recommend leveling them up in a balanced fashion, so make sure most characters are LV 3 don’t give only one character the EXP) every chapter.

The only character that isn’t very good IMO is Vanessa you’ll have to be dilligent to make her good until CH9 A or B when you can farm if you want to.

There are a LOT of stat boosting items spread through out CH6 for making your characters a LOT better once you complete CH6 or during CH6 you can use them or save them if you had good level ups.

Also, I did indeed test all those maps on difficult mode and even made sure my character got crappy LV ups to make sure they are beatable.

Also, you should have gotten a couple of stat boosting items try using those.

You forgot to mention the fact that the fighter in CH5 is shown on Difficult mode this is his stats on Normal (which I recommend people start with): 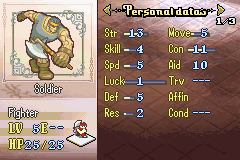 Additonally, I never recommended using the Easy Mode weapons I only recommended keeping them since you could become softlocked in CH8 when Ephraim arrives if his team isn’t strong enough to handle the enemies since they’ll be killed and you won’t be able to continue.

And “Skipping the difficulty” is useful for:

Lastly, Artur doesn’t do well against Mogalls despite what the opening shows.

Mogalls have good Spd and Res and low HP and Def so use a physical fighter, Neimi can hit a Mogall and won’t be countered if she’s dead use Seth.

He’s better used against revenants and bonewalkers since they can’t counter him.

I’ve decided to call the changes revisions instead of updates.

I have made another revision hopefully this is the last one.

It changes Dozla’s inventory in chapters 11A and B and prevents him from moving in CH 11A, lowers his skill by 6, and makes the range of the Easy Mode weapons 1-3.

I also added another screenshot to the Screenshots folder showing off the 2-3 range change for bows. 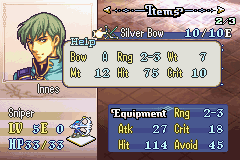 I made another revision:
I gave Forde +1 base Spd and removed the Vulneraries in the NPCs’ inventory in CH6.

I made yet another revision:

All ballista weapons have stats changed.

Many CH11B (AKA Ephraim’s route) changes.

Here’s a screenshot of the changed Easy mode to Novice mode: 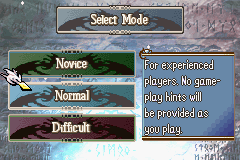 This screenshot has been added to the screenshots folder.

so the story is completely unchanged right? only gameplay changes have been made?

I decided to add the hack changes as a separate file, even though they come with the hack download.