Hey everyone! Back with the promised update, we are now up to 15 playable chapters!

Here’s what you can expect: 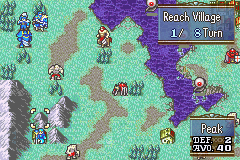 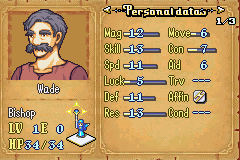 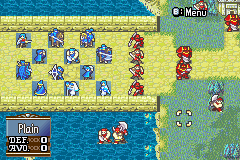 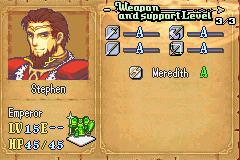 Link is below or in the opening post. Thank you for showing interest and supporting the hack! I have an extremely busy next month of my life (I have my PhD qualifying exam, am moving, and getting married all over the next month), so next update may take some time. But rest assured it will com eventually! Enjoy!

Hm, that is surprising. Could you give me more information, and maybe send me your save file in a DM?

Using save files from previous versions generally isn’t the best thing. You should likely restart the game to see the changes, but if you do want to use your old save file, you must restart the chapter. Trying to resume almost always crashes the game.

Snakey’s right, I made quite a few changes to the previous chapters as well and this is likely the issue. I played through the entire new patch on two different emulators in fact and it played fine all the way through. So I suspect that it has to do specifically with how the old save file interacts with the new patch, and not with the patch itself.

i’m sorry I couldn’t help myself

seriously though looks promising, keen to see where this goes

Ha I appreciate the art my dude, made me chuckle. Hope you enjoy the hack, and thanks for the encouragement! Updates will unfortunately be sparse the next few months, but I will keep chipping away.

don’t worry about slow updates, no great hack was ever made in a week!

depends what your definition of great is chief

Has chapters
That’s it, according to blitz standard

Realized I hadn’t updated the formal credits in a while, so they are now up to date and much closer to the top of the OP. Thanks to all the fine folks who contributed in some way to the project!

It’s been a minute since the last official update, so I thought I’d post here to keep those who are interested in the loop.

New chapter creation has been slow. Unfortunately, I’ve been getting dunked on by school and research, and got married in August, so I haven’t had much time to really dig in to the project of late. I prefer to really be able to sit down and focus when writing new events/mapping/placing enemies, and recently my mind has been too occupied to be able to do that well.

The good news is, I have been able to make quite a few tweaks while play testing, which I’ve been able to do more frequently. These include revamping the EXP curve to curb against snowballing, balancing units better, improving palettes, and implementing a new no-branches promo system. These are in addition to tweaking enemy stats/placement and already existing maps. A new stat screen has also been implemented, as well as a few other miscellaneous graphic changes. I’m excited about a lot of these edits, as I think they make what’s already released much more fun and balanced.

@Pandan has graciously recorded an LP (featuring e voice of yours truly) for FEE3, which I’m very excited to showcase. I hope to release an update following FEE3 that features the revamp of what’s already released, as well as 1-2 new chapters.

Thanks to all of you for your support and patience! I wish all of you a happy FEE3 and hope you enjoy the 7 Siblings showcase!

@WarPath so are the 7 siblings the main lords

@MakoQueenofAdrestia They each play a fairly large role in the story, but only one of them is technically a Lord. Their mother is one of the lords as well, and the story focuses on their family dynamic in the midst of a larger conflict. Some story arcs have more focus on the family, while others focus on larger events taking place in the world.

7 Siblings had an FEE3 showing today! You can find it here:

Thanks to Pandan for recording and Arch/MK404/all other involved in putting FEE3 on.

Like all the other cool kids, I’m releasing an update on the heels of FEE3! It’s a small one, only one new chapter, but features a lot of rebalancing and graphical updates that affect earlier chapters. Hope you all enjoy, and know that I’m hard at work on new chapters! (In fact, was playtesting until 2 AM last night lol)

Addendum: Scraiza discovered a very embarrasing bug where visiting the game’s first village results in a GameOver. This is what I get for trying to add cool sound effects, not throughly testing the event, and somehow changing my game to be unplayable. Bug has been fixed and patch updated, sorry for the inconvenience.

I mean, you’d be gameover’ed too if you invaded a private property

Hello there. I discovered this hack via the FE E3 video in MageKnight’s channel, and immediately piqued my interest. I have played it up until the bridge map, chapter 10. Here are my thoughts so far.

The dificulty is way too hard all across. I suppose the intention was to cater to players looking for a challenge, but I’m not one of those, and even on easy mode my blood boils with frustration in every chapter. Lower density of enemies or lower stats may help tone it down to reasonable standards.

I’ve also noticed that many chapters force the player to play one specific way, often by having many enemies with effective weapons throughout the map. Should I deploy some fliers for utility? No, because there are archers conveniently waiting around the villages. Sammy for the front lines? No, because there’s an armorslayer in the first wave of enemies. Cavaliers? No, because there’s a halberd there and a horseslayer there. I know you want to test the player’s wit, but you have to give him some breathing room. After all, the more applicable strategies there are, the more varied and replayable a chapter is. Otherwise it becomes a rigid and hardcore-only experience where the player is hopeless until he figures out the one true solution to the puzzle. Good strategy games allow several plans to achieve the same goal; they give you a problem and provide the tools for you to create a solution for it.

As for story, I find Arianna kinda unappealing. The description says she’s kind, but she comes off as bossy and cold to me. The rest of the characters, though, are pretty likable, and I’m quite happy to see them interact. If Arianna’s characterization was at the same level, it would be a fantastic read. Nancy, Scott, Andrew, Wade and Joe are great, for example.

So that’s all, I think. I know this sounds harsh, but I make this critique out of love toward this hack, with the hope it improves, because I genuinely enjoy it outside of the map design. It’s what stops me from wanting to keep playing.

Thanks for giving the hack a look! I appreciate all of the feedback.

Before I address any of your points, know that the hack is actually going through an extensive revamp right now. The story is being moved out of Magvel into an entirely new world, and most scenes are being edited extensively. While going doing this, I’ve also taken the opportunity to pretty heavily edit some of the maps, hoping to fix some of the density issues you mentioned.

As far as the difficulty, I do admit I like to use effectives/scary weaponry to encourage thought. However, I think part of my problem in design is I always know what’s coming; something like that can’t possibly surprise me. I’ll need to be more careful to think about how a blind player would think. I like creating matchups/situations where some units excel and others don’t, but I’ll have to evaluate if I’m too restrictive by that, and should give the player more options.

I’m really grateful to hear your feedback that a lot of the maps are too punishing/force you to play a certain way. This is something I’ve been wary of for quite a while, considering I haven’t had really any dedicated playtesters at all since quite early in development, and the game has evolved significantly since then. I generally enjoy harder games/difficulties in the series, and I do want the game to reflect that. But I’d also like it to be forgiving and certainly beatable by any FE fan who wants to give the game a try.

You’ll be happy to hear that Ch 4 (Andrew joins, with the Spider Islands and Mogalls) has largely been reworked to be made quicker and easier. Wayne’s chapter is also on the “needs a big rework” list. I can take a look at the Wade/Brandon and Joe chapters as well, I can definitely see how these are too stringent given the time limits and limited resources.

Thanks for playing as far as you have. If you’re game to keep playing, I’d love to hear your thoughts on the subsequent chapters, as I’ve only received feedback from another other than myself on one of them. Knowing my tendencies, they likely fall into the same boat as the others, being largely too dense and punishing, but specific feedback would be much appreciated.

I’m glad you have (largely) enjoyed the characters, they’re the part of writing I enjoy the most. Arianna is planned to be expanded upon in the rewrite going on now, and I hope to show a lot of the character’s softer qualities.

Once again, appreciate the feedback, and am thankful you gave the game a shot.