Hello everyone! I’m Citrus, and I’m really excited to share with you all my first release of my romhack, Sea and Sky. I started hacking around August of last year and shifted through around working on 3 or so big ideas, but this is the one I found myself most interested in working with and the only one which got to a releasable state. Admittedly, I’m still an amateur at this, so the hack isn’t very good, but I hope that in time, it can be good. 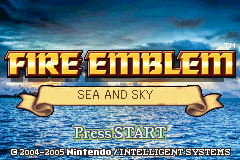 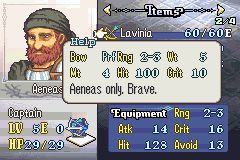 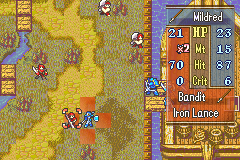 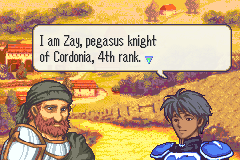 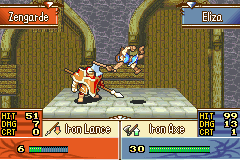 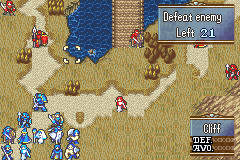 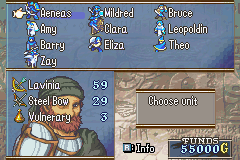 Thanks for letting me know, I’ll fix it when i add another chapter or have more bugs to fix, whichever comes first.

Only if you add a full manuscript of Pride and Prejudice in J&P.

Congrats on the release. Looking forward to testing.

A new hotfix has been released, smoothing out a lot of edges in various areas including the aforementioned money glitch. Patch is the same link.

Hey. Played your demo on the FE Reddit Discord. Congrats on getting out something solid. For things I noticed and could be considered:

-It’s fair for the game to be easy. But the hack honestly felt too easy with the army’s strength. Normal enemies in FE8 are weak, but your units compared to them are far stronger in this than in base FE8 (Obviously discounting Seth). By Chapter 2 my units could frequently ORKO many enemies while not taking much back from them. It may be worth raising their stats a bit to match the better units you have.
-Most units felt good to use. The lord’s bows aren’t super useful since he rarely ORKOs and the other units rarely need his chip to kill things past the first chapter. It at least feels like he could use better growths for more Long-term potential. Mildred got doubled by enemies with her Silver Lance and didn’t One-Shot anything. Ernest joins with stronger stats than Theo, has a horse and can use all of the same tomes. Eliza nearly capped strength by the end of the demo and would OHKO most enemies with an Iron Axe. I feel like these units may be worth revising for balance purposes.
-Chapter 3’s boss only has a Steel Axe and doesn’t move.
-Many enemies had no map icons and looked glitchy as a result. Remember to assign these in the Character Editor.
-The bandits in Chapter 3 didn’t really add anything. They weren’t pressuring the villages since they spawned right on top of my army. Perhaps have them on the map at the start and far away from the villages? (Have the one going after Ernest start in the mountain). It will encourage more active movement from the player.
-The Paladin in this map had very low stats. FE8 Normal mode has a glitch that makes promoted enemies weaker than they’re supposed to be, so you might want to make sure that’s corrected in the patch list.
-In Chapter 4, there’s a nomad near the start that was a tile away from popping out of the fog and sniping my Pegasus Knight on the first turn. I feel like he should either be farther away from you or be an archer with less movement range.
-Partway through the map, a mage pops out of thin air on the center island. Beyond this, he drops his Bolting tome. Something doesn’t feel right about getting it that early.
-There are some typos throughout the script. The cutscenes are clearly early works, but you should give them another proofread to iron those out.

Hope this helps. Best of luck with everything.

This is really good feedback. Thank you, I will take these things into consideration.

I remember mentioning that paladin to Citrus and he said that he just wanted to have a random prepreomote there so I’d assume its low stats are intentional.

To give more in depth responses to some of your points:

-Yeah, I’ll probably end up making the enemies stronger. The game felt fair to me, but I’m biased, since I would consider myself slightly below average at FE and definitely near the bottom of people who play hacks.

-I am pretty set on having my lord having low growths, but I plan to keep him relevant in the long term with things like new prfs and a good promotion. Mildred is honestly a weird unit and I’m not sure what to do with her, because she’s supposed to be a Jagen but not really? She could def use a bump to strength, speed, or defense, but I don’t know which.

-Eliza is also weird. Fighters are a jank class because they have bad speed, bad defenses, bad skill, and no utility or mount which makes them pretty awful, but I feel like changing any of these things would make them lose their identity as a class, so I just went ham on HP and strength. I probably will tone her down.

-In the long term, I think Theo is better than Ernest as he has better growths and gets staves on promotion while Ernest doesn’t. Obviously this isn’t the kind of thing that matters in a 4 chapter demo though. I guess it wouldn’t hurt to give Theo an edge in speed to be more competitive early game.

-In the patch I’m working on, I had the nomad nerfed to not one shot Zay at base HP and defense, but idk how elegant of a solution that is

-I was fine with giving Bolting since I feel it’s much more useful against the player than by the player, since enemy units are plentiful and expendable, while yours aren’t. Come to think of it though, you could probably use Bolting to cheese what I had in mind for Chapter 5, so I will remove it.

-As MrGreen said, the Paladin was mostly just there to scare the player kinda like the Warriors in Chapter 2x of Thracia. I wanted it to be more threatening than the unpromoted Cavs, but not by too much. I can’t recall its stats though and whether or not that’s actually the case, so I will check them.

-Yeah I’m not even gonna sugarcoat it, the script is bad. I’m bad at writing and not particularly good at eventing. I’d like to think I have some good ideas for the story but have no idea how to convey them well or properly flow between the major beats. Story admittedly is not a huge priority, but it would be nice to make something entertaining.

Again, thank you for the feedback! I will take all of what you said into consideration, however I would like to see more perspectives before I make any drastic changes.

Thank you for the feedback! Some responses:

-Yeah, “too easy” is something I’ve gotten a LOT. I’m for sure gonna buff enemy offenses by a bit in the next patch, then maybe make everyone’s weaknesses more defined so they’re less juggernaut-ey

-I think Aeneas being hard to kill is fair because he has a hard time killing back, but I am aware that fair =/= fun,so I’ll see about that.

-Zay does not go Dark Flier, his high magic is so he can use the Flame Lance whenever I give that out, and just because it reminded me of Karin from FE5 who I lifted his general design as a unit from. Good point on how he cheeses chapter 4, I’ll probably add an archer or two near the boss so he can’t just skip it.

-Some of the errors you’ve mentioned are fixed on the patch I’m currently working on, I’m just gonna make more substantial changes before pushing another release.

-Enemy offenses have been universally buffed to make them more threatening

-Chapter 3 now has you start in the middle to make the map length less lopsided, and is now actually a rout map.

-Chapter 4 has included an archer near the boss to prevent you from using Zay to fly over the river.

Another new patch, with a few battle palletes (shoutouts to Kyrads for doing one), and rebalanced speed. I tried to seperate enemies into 5 speed tiers and adjusted the base speed of your units to determine what they double or don’t. Hopefully this solves the problem of some units getting doubled by almost everything and eating shit while others double a lot and destroy everything.

Apologies for not dropping a new chapter in a while, I promise the next patch will have one.