Gilded Tales is a FE8 hack I started working on on and off while messing around with FEBuilderGBA and realizing I could maybe actually make something with the tool. Back in the Nightmare days I got very easily overwhelmed w/ trying to create hacks, but now I think I can actually go somewhere with it.

Here’s a Discord link if that suits your fancy. I’ll be keeping that updated with new information.

The story revolves around a young mercenary girl named Rana unraveling the mystery of her mother’s disappearance and saving the world of Grania from a powerful group of necromancers dubbed “The Unholy” along the way. (Honestly all of this is open to change because the story hasn’t been fully fleshed out yet)

the hack is very early in development and I am open to any and all criticism and suggestions! All growths, bases, palettes etc of characters are subject to change for now, but I wanted to show off the little bit of what I’ve made so far.

Gave it a quick playthrough. Seems promising so far. I’ll jot down some stuff that needs fixing or just to keep in mind:

Good luck with this. It’ll be interesting to see how the hack shapes up.

Appreciate the feedback! I will do my best with it. Can’t promise things will move too fast due to my inexperience though haha.

A weak brave sword sounds pretty appealing. I would definitely go with that.

Will post a new patch once chapter 2 is fleshed out. 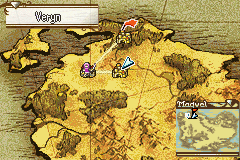 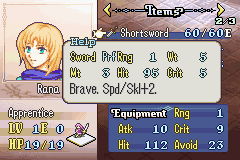 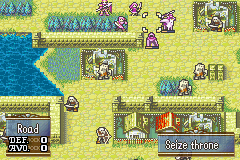 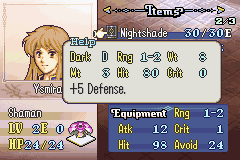 is there a link to play?

Is this hack still being developed?

It is not at the moment. My interests have kinda shifted & haven’t had motivation to work on the project since unveiling it, so you could say it was a bit premature. I do have a good bit of the plot and characters written out, so I don’t want to write off the idea of me coming back to it eventually, but I’d rather say it’s dead than to give empty promises.

I’ll also edit this and say my ideal goal is to make my own tactical RPG in the vein of FE + maybe just scrounge up what plot I have written for GT and put it into that, since I don’t necessarily want to be tied down to making mods of games and would rather create my own thing. Not sure if/when that’s happening though either, oops.