[FE8] Ending Event not running when a portrait is inserted

So I’m trying to wrap up this chapter, but when I assemble the events I get this not so fun portrait error: 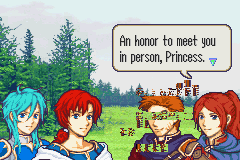 But when I reinsert the portrait so it works right the game hangs up after the last enemy is defeated.

I had this issue in chapter 1 with the portrait breaking it and the beginning event hanging up when it wasn’t but I can’t for the life of me remember how I fixed the problem.

Insert the portrait and event to different offsets.

I’m not gonna lie I have no idea how to change the offset a portrait gets inserted at.

So I’ll probably just reinsert the events further up. Which sounds a lot like what I did to fix my issue in chapter 1

I’m not gonna lie I have no idea how to change the offset a portrait gets inserted at.

It looks like you’re inserting events in the block of free space that FEditor uses for auto-patching.

It could also be that FEditor saw whatever free space you changed and decided to use it for auto-patching too, so try de-allocating it?

Everything gets out in at the end of the rom, I usually leave about 200 bytes of space between the stuff I insert but I dunno if that’s enough or even matters

Does FEditor do that stuff at the end of the rom? Because that’s where all my stuff is

[quote=“InvdrZim13, post:11, topic:1397, full:true”]
Does FEditor do that stuff at the end of the rom? Because that’s where all my stuff is
[/quote] It does, from my experience (inserting a kilobyte of 00s at the end of a Bloodlines rom to avoid accidentally inserting music over graphics, then finding that space almost instantly filled up by text edits. #modding).
So yeah; try to get FEditor not to do that by using the de-allocate function on the free space manager menu.

Obviously if this has happened several times and you’ve made the same error twice, 200 bytes is not enough space. I’d be leaving at least 1000, if not more.

Yeah it looks that way, now that I know it wasn’t just randomly happening I can fix it in the future