Based on the Cartoon Network series under the same name, this rom hack is based off Fire Emblem Sacred Stones. everything from the show, the plot of the episodes, all the seasons? Yes! it’s all here! But this is my first time making a Fire Emblem ROM Hack so if anyone would like to be a part of me in helping me out with this project feel free to message me. This show doesn’t belong to me it belongs to the series creator himself.

Erika could be edited into Kelsey
Seth probably could be Craig
Franz could be J.P

Progress: well I’m only doing Season 1 of the show for right now
Season 1 - 0%

As for the other characters? well i could use some help with that if anyone knows everything from the show itself. All the kids in the show needs to be Villager classes which would make sense since in the show almost all the characters in the show ARE kids.

Most people usually aren’t going to be willing to help until they see some sort of progress, even if it basic, such as an early version of your prologue map. You can get away with using portraits from the repo until you find someone whose willing to help you. Or you could splice together vanilla portraits to make “makeshift” portraits that try to match the characters.

And how do I do all of this if I may ask? I don’t know how to do all of that this is my first time making a rom hack and that’s why I joined this site so that I can get a couple of people to help me out with this.

i’d suggest looking into how to romhack first, starting out with tools, processes, all that, before you start asking people to help you and dedicate their free time. Most projects in of themselves are solo gigs, possibly with one or two people giving you some advice or help occasionally, but generally most people just do all the work themselves in projects like gathering resources and doing the actual hacking.

Frankly, it’s not easy getting people to help you, and the less people believe you have the skills to actually pull your weight in the project, the less likely they’re gonna want to even try.

Beyond that, you also need to give people a reason to be interested in what you’re doing past just “I have an idea”.

There’s a pinned thread with all the materials.

Creating a Chapter in 16 Minutes 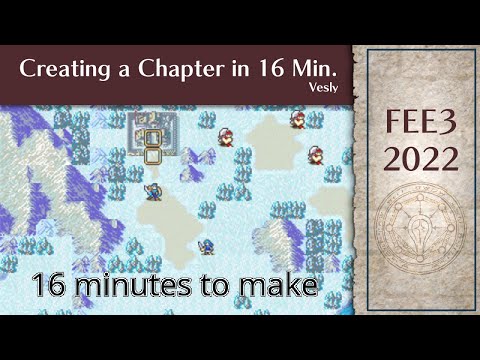 Official FEBuilderGBA Thread where you can get help with any problems/bugs you run into.

There’s also a discord, with an FEBuilder help channel where you can get help quicker, and in real time.

Check out the Fire Emblem Universe community on Discord - hang out with 2,515 other members and enjoy free voice and text chat.

For assets, such as portraits, the repo would be a good place to look:

Note: This topic is ONLY for submitting resources. Questions, concerns, and any other issues with the repo or anything posted in this thread should be directed to the Repository Discussion Thread. This topic is for the Graphics Repository, a collection of free to use sprites. Those sprites include battle animations, class cards, map sprites, weapon/item icons, portraits, maps, tilesets, and many other things. This repo is currently maintained by a team of the fandom’s animators and organizers…

For splicing, I would recommend just searching “Splicing” here on the site, you’ll find a good few tutorials for it. There’s also a channel for portraits and such in the discord, known as spritans, same goes for music if needed.

Well thanks for the help but I meant I could do one part of the game and other people can handle the rest you know? Story, Portraits, and Music. I can handle the Chapters.

You’re still gonna have to do some work on your own before people are gonna be willing to help, sorry to say. Like I mentioned, you can use placeholder graphics until you find people who are willing to help.

If I may be frank here:

That’s insane to ask of people who have no idea what your skill level is, what your exact plans are in terms of gameplay design, and in consideration of the amount of effort that actually takes. And this is all for free, by the way. Most people won’t do these things for free, especially for decent to high end stuff.

There’s a lot of hacks out there. I’d say a good 80% or more are solo affairs, and those team projects that do exist are largely long-running affairs led by respected community members. People do as much as they can themselves, and what they can’t do, they use free to use resources. Most people have their own hacks to be working on. They aren’t going to just stop working on their own hack to work on somebody’s concept.

At the absolute bare minimum, you should have an actual released patch to prove you’re actually going to attempt to see things through. Right now there isn’t so much as a screenshot.

But I don’t how to use screenshots on this site I’m new to this remember?

You need to post a bit on here before you can post screenshots, you’ll be notified when you gain that trust level

As a solo developer myself I agree with what everyone else has been saying. With the wonderful tool of the graphics repository you can use all kinds of original assets for your hack and make it feel unique, pretty much everything graphics related in my hack other than some map palettes I did myself weren’t done specifically for my hack but rather for the repo.
It may be seem quite daunting at first but romhacking is the kind of thing that takes a while to get the hang of but anyone is capable.

I’d also worry about getting original assets last because it’s not nearly as important to a hack as the gameplay or writing is so don’t worry people generally won’t be turned away from your hack if you only use F2U or vanilla assets.

Another solo person making a romhack chiming in, I strongly recommend the use of placeholders in early development. Be it vanilla FE portraits or graphics repo F2U stuff, use place holders. Make it look pretty after getting things functional.

Don’t worry about assets until you get some story/map/design work in. With what time I can spend making mine I tend to edit my portraits or pretty up maps and whatnot when I hit a writer’s block. I’m no artist, but it’s actually pretty fun making portraits for my characters (well, more splicing and editing vanilla portraits to varying degrees…). You get better the more you do it.

As others above said, once you have things to show people will be more willing to pitch in. Comb through the comments in Vision Quest thread and you’ll see. Starts off rough, and people gradually contributed pallets and portraits and whatnot as they liked what they saw in the project.

It’s daunting at first, but I hope you stick to it.

I’ll try doing that if I can I am a bit creative sometimes but I’ll do my best.