Huh that’s weird, on my end I’m able to view her stats just fine. Not sure what’s going on there. 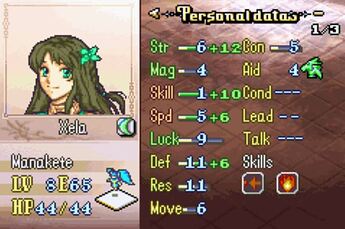 How do I send the sav? The website won’t let me attach it

Attach it in a discord DM, I’m Len #8625 on there. Or as an email attachment to leozein89@gmail.com

I restarted an it’s ok

Ok great, glad to hear that. I loaded up your save and didn’t have the issue there either, so I’m not sure what happened. Thanks for reporting it though & let me know if you encounter something like that again!

This concept fantastic and addicting. Aside from replaying the thunder temple, I did a normal difficulty run iron man and pretty much softlocked on the final map with only 4 units and no healer: Stone spam is really hard to play around reactively with dwindling numbers. Tons of good things to say and I can’t wait to try another run. Just two suggestions rn.

-I don’t know how implemention for it would even work, but I do feel it’d be nice to almost have minimum one convoy unit at all times, maybe by giving a supply scroll whenever your current user dies. In this run I gave it to the “starter”, and while I kept her for most of the game, losing her was pretty much the beginning of the end for the run specifically because of losing mid map supply. A lot of that pressure was because I’m doing this blindly though, so it might end up unnecessary or overpowered on subsequent attempts.

-I’m not sure how possible things are meant to be for teams without certain assets, but chapters 7 and 8 seem to ask a pretty steep amount from the player to be possible.

I don’t know how possible chapter 7 is for an army without a flier, or at least a siege weapon, because being able to reach the throne area before there are just too many gorgons nearly requires one of those. Unless the right side recruit is always a unit that fulfills one of those conditions, it seems very easy to get softlocked there, even with a fairly decent number of units: it doesn’t help that the refresher I had died to a single shadowshot.

Chapter 8 is a bit different in that a group of 5 or less units probably cannot beat the map whatsoever. (unless a warp is available that I missed) I don’t know what in the game can break through two groups of Brave weapon enemies alone, and there are two such groups you need to beat on top of the boss, and that’s not mentioning the ticking time bombs. Granted, Five is a very low number when you can probably deploy far more than that, I just don’t know whether or not I should be expecting that kind of softlock.

Also, in Chapter 8, the Franz and Seth replacements have a convo. That was a very funny bug to see.

Thanks for the feedback, I’m glad to hear you’re having fun! To answer some of your questions:

That all being said - given the nature of this hack, I’m not opposed to certain runs becoming unwinnable if too many mistakes pile up. My ideal balance is for every attempt to be clearable from start to finish, but to still require good play and careful planning to actually get the win. To some extent, I’d be concerned if people were blasting through this on their first try!

You make a really good point about supply access. Ideally, I don’t want any single unit to become a game over condition, and I can see how having just a single unit with supply access would lead to that. I will consider places to give the player more supply scrolls throughout the game.

I only just learned about this a few minutes ago. I am always hyped for anything roguelike/lite in nature. I even have distant, grand aspirations to make Roguelike FE, though if someone else makes it before me that will be awesome too. Saves me the effort!

I love the general concept of this hack. Feels a bit Storge-ish in nature, yet clearly does its own thing and has its own concept. This is the kind of project that really gets me hyped!

And as for using graphics from the Repo, that’s why the repo exists! I’m glad it’s helped enable you to bring your hack to the next level!!

Having quite a bit of fun so far, I’m on chapter 5 hard and had a couple of close calls.
One thing I kinda dislike is how many enemies have crit, I think Chapter 2 would have been pretty miserable if I had picked the Axe guy at the start, Rella’s crit immunity has been relevant in nearly every chapter and I assume Avery’s massive defenses can sorta act similarly, but I haven’t gotten an Iron Rune or another unit with high defense. I know you’ve said you want this to be the kind of game where the player might have to make sacrifices at some point (and the chapters do feel like that design wise), I just think having enemies with high crit and little countermeasures is the cheapest way to facilitate that. Otherwise great idea and great execution so far!

Edit: Okay total party wipe on Chapter 5, but I guess that’s on me for taking too long, still I can’t see how I’d get all the villages AND the main objective. Maybe I’ll do another run on Normal even though I liked Hard for the most part, Lunatic must be absolute insanity though

Thanks for the feedback, I’m glad you’re enjoying it!

You’re correct that the crit-happy design comes from the fact that I’m expecting some units to drop here and there, as opposed to traditional “reset on death” playstyles where crits just cause an annoying waste of time. Though, I would hope that there aren’t any enemies who are impossible to play around without relying on RNG, so if any in particular stood out let me know and I’ll do some more rigorous testing.

I realize it’s kind of unusual by FE standards, but I like crits from a design perspective, especially in this project, because they give players a choice: they can do things the safe way at the cost of more turns / resources (e.g. guzzling pure waters before engaging the ch4 boss), or they can take risks by playing into the crit if they want or need to go faster.

I’m only on Chapter 3, on hard, I’m really digging how aggressive the enemy placement is. Every turn it feels like I’m sweating trying to figure out the optimal usage of every single unit’s movement and attack. I’ve managed to avoid deaths so far, but if only because I picked Rella by chance and could counter the high crit enemies safely. God, imagine if in Pokemon you picked your starter and the professor goes “Ok, now the other two starters DIE right in front of you! Have fun on your adventure.”

I’m really enjoying the experience so far, this definitely seems like the kind of game that will stand the test of time.

Thank you for the kind words! I’m thrilled that people seem to be enjoying the level design. I tend to walk a delicate tightrope with enemy placements (had to reel it in a bit after my previous project lmaoo) so I’m glad it’s having the intended effects.

One thing I noticed that I wasn’t sure was intentional, and wanted to ask about: When chapter 1 starts, I noticed you can reset and restart the chapter and roll for different units. It seems the “seed” or whatever is used for randomization isn’t set in stone at that point. I’m not sure if this can be done in other chapters.

I could fix this by having all the chapter-start units load in at the end of the previous chapter instead. It would be a bit cumbersome to shuffle all those events around though, so it’s not high on the priority list.

Won my second run after losing a bunch of units in Chapter 6. The maps were really tough, but well designed, especially considering your stated design goals of making the game replayable/variable and suited to ironmans, I think you really succeeded on all fronts there.

And I guess I agree that none of the early crit enemies are ‘impossible’ to play around just that imo the Sniper boss in Ch2 and the Killer Lance Gargoyle in Ch3 are a bit much on top of the other stuff you have to juggle and things can go pretty badly in those chapters if you get an unlucky miss for example.

I also noticed a few bugs/errors:

Finally shoutouts to Anna and Dallas for being absolute MVPs in my playthrough!

Congrats on being the first person to report a completed run! I will look into all these issues, thanks for your keen attention to detail. (It seems I completely forgot to add the new classes to the usability of that promo item, oops

I think you might be right about Artemia, she’s been mentioned a few times now by others as well so there must be something to it. The player doesn’t have a ton of options that early in the game, so I can see where the concerns are coming from. I will consider tweaking her to be a bit less punishing.