(I promise that this is a placeholder name)

What is this?
This is part 1 of a FE8 romhack I have been working on since December. Part 1 features 11 chapters with 4 side chapters and 39 new characters in a completely original story set on the continent of Rechul following the coup of the royal family of the Kingdom of Balyra. It is titled Attempt 3 as it is my 3rd attempt at a romhack that is to my liking.

At this point I need playtest feedback on part 1 of the hack and with that motivation to dive into part 2.

Difficulty:
This hack is significantly more difficult gameplay than FE8 (which is not that hard to do, but worth pointing out).

Story:
Part 1 tells the story of a group of young villagers, brigands, mercenaires and other miscreants recruited by a squire to fight to restore the royal family to power, as they make their way to a resistance stronghold. 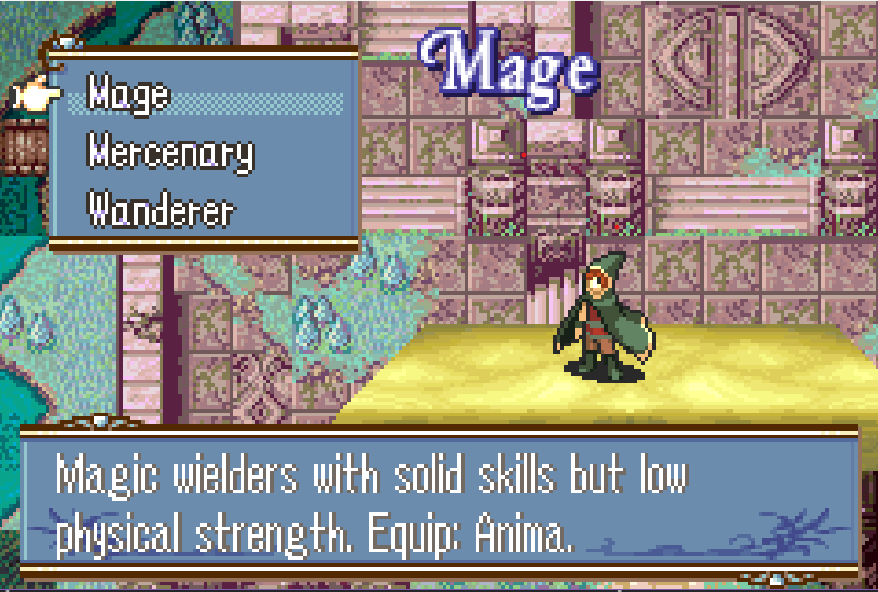 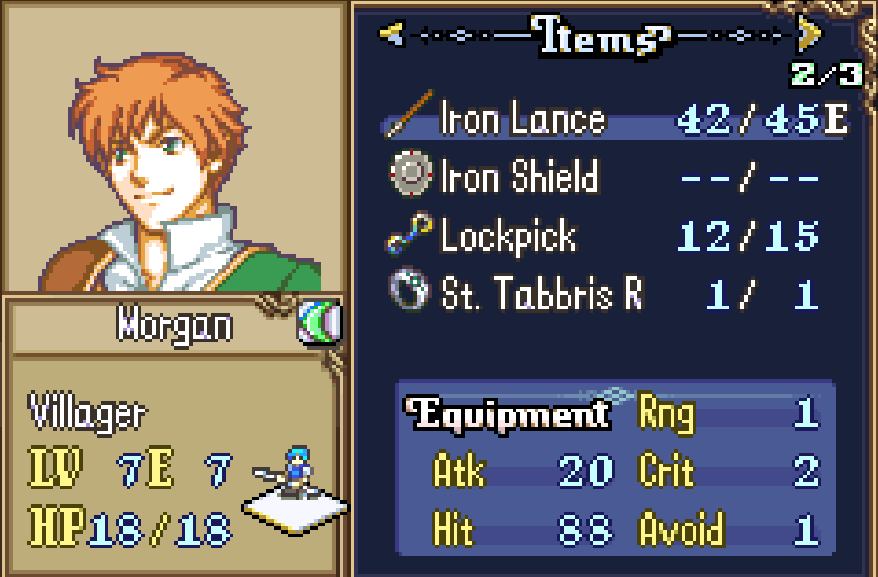 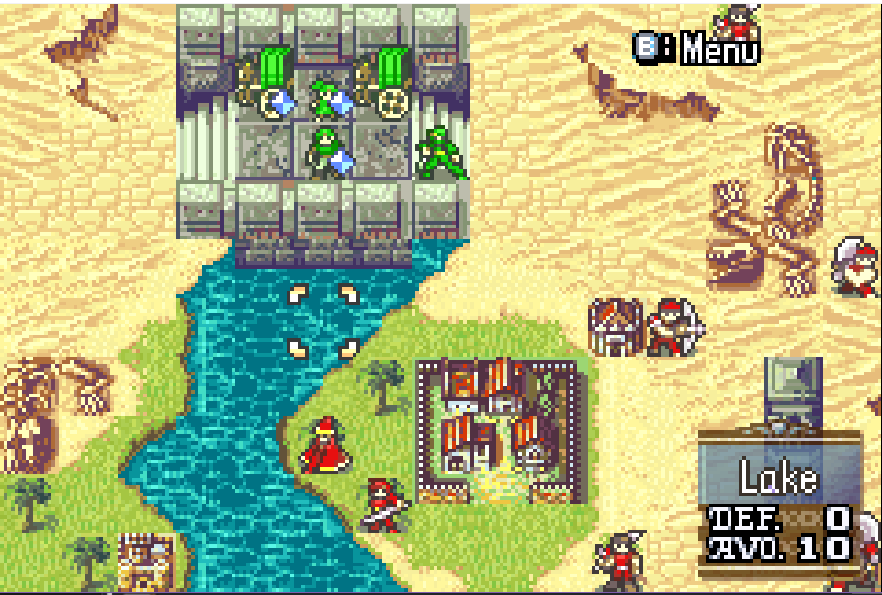 I get a game over on turn 1 enemy phase of Ch. 1 after an enemy moved.

You have to prevent the enemy units from getting to the inn. If they end their turn on a tile adjacent to the inn you get a gameover.

It seems that happens even if you kill them when that occurs, which was not intended.

That tile was not adjacent to the inn. I think if the area you’re supposed to defend is that wide, it should be marked more clearly, because I assumed it’d function like preventing a house being raided (ie: prevent the enemy from reaching the entrance).

, I’ll edit it so that it works as intended.

Alright I’m playing through this, and I had to re-read the post to realize… The jagens are locked to easy mode?! That’s ridiculous. Given how weak all of the player units are so far, not having a jagen is a terrible decision. Please make them join on the other difficulties.

This story is not about the jagens. Part 1 is about a scruffy group of villagers who start as inferior to their foes and grow over time. The jagens are locked on easy mode because the only differences between easy and normal mode are the presence of jagens and causal mode being on.

Part two will feature a jagen and be a more traditional fire emblem story about a prince and his retinue.

That said I’m still working out the differences between difficulties and how I want that to show, hence the play test. But for normal mode the jagens will not be present at this point in the story.

Then you’re prioritizing story at the expense of gameplay, which you really shouldn’t do. You can have jagens and not have them be important to the story, you know. Just anything more than a bunch of 4 move scrubs. At least give them 5 move or something! It’s painful to deal with 4 move, especially when all the enemies have 5 move (and generally better stats too).

I personally find having inferior units fun to work with, and I like the gameplay and narrative to align, but I understand your criticism.

That said if you want access to the jagen units, they are available starting in ch2 on easy mode, which is mechanically identical to normal in every other way.

At least give them 5 move or something! It’s painful to deal with 4 move, especially when all the enemies have 5 move (and generally better stats too).

I’m going to agree here, I’m only a little ways in so far and every single unit having 4 mov is painfully limiting when enemies have better stats, more numbers, and more movement. I get the idea of keeping your units weaker but it feels really awful for every unit to barely be able to get anywhere. Would appreciate a higher movement stat on every player unit or even a few even if their other stats are kept the same, I think it wouldn’t really take away from having inferior units, since their stats are already so bad.

Went through a tiny bit of this. Will go through more later, but wanted to drop initial thoughts.

I might have been overly negative in my thoughts here but I think this game has good potential and a somewhat unique concept, just hindered by a couple frustrating choices. I felt like these maps were really well designed, honestly, but let down by the 4 movement and few other things. Feel free to ask any clarifying questions.

Hi @Relic thanks for playing what you have thus far and for the detailed feedback! I don’t think you have been too negative and feedback like this is super useful

. I will reply to individual notes below.

Thanks for playing what you have thus far and for the feedback, I’m glad you like the maps.

I will consider definitely consider 5 movement and work on making reinforcements more telegraphed and adding UI changes to speed things up.

I updated the first few chapters with feedback from Relic. These are minor changes, most telegraphing reinforcements in those chapters and adding MMB and it should be compatible with the saves from the previous version.

I am curious how you played through chapter 1.

Uh, with a lot of struggling. I’m not really sure how else to say it but I spent a long time in the beginning area turtling and taking out the enemies very slowly and then slowly inched my way over to the boss as the soldier took care of the upper house and village.

I have never played fe2/fe15

so ironically any elements that are similar are coincidental or were picked up to cultural osmosis.

Wow, I’m surprised to hear that, it’s uncannily similar for never having played those games. I was convinced they were your main source of inspiration. I do recommend playing them, though, for this project, just because the concept is so similar and it might be useful to see how another game does it.

On the topic of FE15, I think playing that would be really good for seeing how it handles having a bunch of trainees early. In that game, you have Alm, Lukas, Grey, Tobin, Kliff, and Faye. While you do have four villagers, only Kliff and Faye are actually super weak. Grey and Tobin are pretty self sufficient at base. In general, trainees work best when you have a small number of them compared to self sufficient units. Alm, Lukas, Grey, and Tobin can handle the bulk of the work, while you only need to baby Kliff and Faye. When every single unit needs to be babied, it results in a lot of turtling.

Gotcha, I asked because I play Chapter 1 hyper aggressively with Silas and Luin, but that’s likely because I know about the upcoming events in the chapter, so I wanted to know how someone on their first playthrough handled it.

I do recommend playing them, though, for this project, just because the concept is so similar and it might be useful to see how another game does it.

I think I’ll try fe15 at some point then.

I mean in this hack you have 4 villagers that need to be babied in chapter 0, but in chapter 1 you gain 2 much more competent units. The first level is hard due to juggling multiple trainees, but I find it gets much easier as they level and you gain access to more units.

I do also feel that the hunter is a very good unit, who can self heal and do high damage once he get’s a proper bow.

I’ll look into playing through fe15 at some point.

I mean in this hack you have 4 villagers that need to be babied in chapter 0, but in chapter 1 you gain 2 much more competent units.

I think you’re overestimating the f!myrm trainee’s combat potential, haha. She’s quite weak and frail, same as the rest of them, so you’re left with 5 units that need to be babied a lot and one very good unit. By chapter 2 their offense does hold up somewhat, but they still do need to be babied cause of the lack of any substantial bulk.

She may be in need of buffs then.

I actually had to tone her down because in previous test runs of mine she was the carry unit, but maybe I toned her down too much.