I would like to make the screen that shows the total turn counts in the epilogue only show turns for Lyn mode. I figure the best way to do that would be set all the turn counts for eliwood chapters to 0, but I can’t find the address. I skipped straight to the final chapter so i only really need to remove that one. Anyone know where it’s stored?

Also is there any save editor for the GBA games?

I don’t think there’s an easy way to not show turn counts for all chapters. Did you test it out and find it skipped chapters with 0 turns taken?

Setting the current turn to 0 and finishing the chapter worked. The chapter did not show up in the epilogue. Should’ve known lol.

Still would be good to know where it’s saved, like if I want to modify multiple chapters after the fact.

I looked at the teq doc but didn’t see anything

Edit: Try setting up a savestate and dumping ram in two cases to compare and find the address.

Hopefully doing that gives you the address of turns taken on a specific chapter. They are likely all stored in approximately the same area, so if the first and last chapter line up, you could probably be safe in assuming that the data inbetween is the other chapter turn counts

ExpandedModularSave is a hack for FE8. Still, I’m going to use it to shed a little light on this.

image1118×286 27.6 KB
The highlighted line represents the save chunk with the data you’re looking for.
Following the function pointers from that line…

I followed the save routine for it, and immediately following is a getter function. They refer to an aptly named gChapterWinDataArray (0x0203ECF4) which seems to be a word array indexed by chapter. (Note to self, this area of RAM looks useful if I don’t care about chapter win data!)

I imagine FE7 has similar structure. An ASMC could be designed to remove win entries that you don’t want. 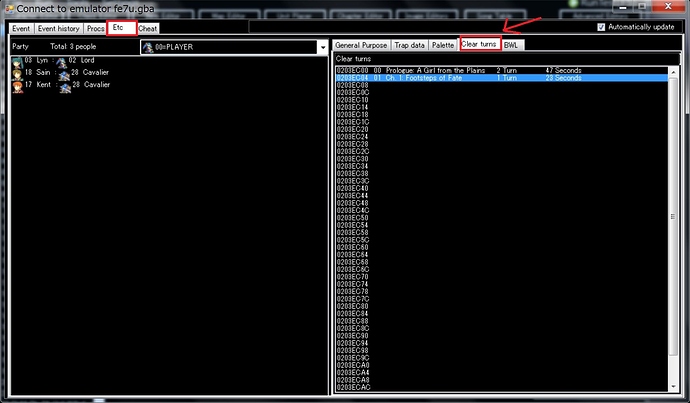 The number of clear turns is saved when Flag0x03 is turned ON and EndEvent is called. (At least in FE8).