I am very happy to announce the release of my FE5 Reverse Recruitment hack. For those that don’t know, a reverse recruitment hack is one that completely reverses the order in which characters are obtained throughout the game. So in the case of FE5, Galzus is the new lord. Rather than explaining, it’s probably easier to show some screenshots to demonstrate what I mean.

I have created a handy spreadsheet guide that covers recruitment, special events, and PRF weapons to help you as you are playing through FE5 RR.

Do characters have their normal growths? How did you calculate the character base stats?

Character growths are kept the same (Eg: Ced still has his insanely good growths from vanilla FE5, but now has room to grow and use them). Base stats were calculated by either leveling or “deleveling” characters to their new level, and adding in or subtracting promotion bonuses as necessary. When leveling or “deleveling”, all promotions were assumed to occur at level 10.

What about movement stars, leadership stars, and PCC?

What about Weapon Ranks?

Why does Ronan have an E rank in Swords? He is a sniper!

This is because he needs to be able to use swords for the cutscene where he teaches Cain Astra in chapter 15, or the cutscene softlocks the game. Overall, I decided the impact of giving him E rank in swords was pretty low considering his join time and how slowly weapon ranks build in this game, you would have to grind the heck out of him to have him actually use an decent swords.

How do you get through Manster without a thief?

Every character that joins in the Manster arc now joins with 3 door keys in their inventory. This means there are enough door keys to get through and get all the chests in Manster just by recruiting all of the Manster units. Some enemies also carry door keys if you need more.

Why doesn’t Galzus have insane health like he does in vanilla?

Galzus’s HP was the one stat I decided to nerf from what it “should be”. Otherwise, he would have 40 HP at base. He is already a really strong Lord, he doesn’t need 40 HP.

It won’t work in my emulator. What should I do?

Use SNES9X. The English patch expands the size of the ROM, which some older emulators don’t like.

How did you make this?

This hack was done using Nightmare and hex editing in HxD.

Who are the route split characters?

How do supports work?

Supports are based on the new characters. So Galzus only supports Mareeta, he doesn’t support 10 people or whatever like Leif does.

The English patch is the work of ChimeraHardline. Many thanks to ZaneAvernathy, for answering questions I had and also for providing much of the FE5 hacking documentation I used. Thanks to the authors of the FE5 nightmare modules, without which this project would not have been possible. Also thanks to Kirb who helped supply me with some documentation that I needed.

Playing this, been having fun. Btw, if you alter the portrait pointers rather than the portrait number each character uses, then the correct portraits do show up in dialogue and such 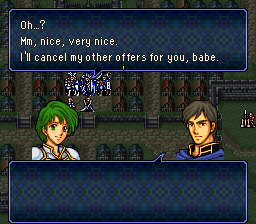 (This patch doesn’t actually work very well with the old Shaya patch, the menu display the wrong names, although it might actually be playable.)

Glad you’re having fun! Also thanks for that information, I will incorporate that into my first major update and get the portraits changed in cutscenes.

Yeah, I tested it with the Shaya patch and noticed that it didn’t seem to work well. I’m guessing as part of the patch, Shaya changed where the name pointers point and stored the English names in a different place in the ROM. I haven’t investigated fully yet, but I may look into that too, and release a version that is compatible with the Shaya patch.