This is FE5-based hack, the latest version of the Japanese romhack known as “Blume patch”. Some of you may be familiar with Blume patch that was copied in Serenes Forest around 2008. However, few people may know that development continued in Japan after that.

Now, I am here to inform you that I have implemented an English mode. The 2022 version is completely different from the 2008 version. I think even those who know the version from back then will enjoy it as new title.

This hack is designed as a new interpretation that the story of the Gran calendar year 776, based on new historical documents. Some parts of the story are inconsistent with the original FE4 and FE5, but please enjoy it as a new theory or an another theory.

I also added several branching events so that the player’s choices are reflected in the scenario. Strange action that one would not normally engage in lead to strange results. These vary, some of which are shown hints in the game for branching, while others are only noticed if you read the play guide. Depending on your choices, you might even be able to get people who normally wouldn’t join your team to join.

All chapters have new events. There are many, from those that make strategic sense to those that delve into the backstory. The total amount of text is more than double that of the original. But this includes branching events, so it is not possible to see all the text in one round of gameplay.

And some of the characters from FE4 are joined. Patti, Arthur, Ares, and others.

When certain conditions are met, secret characters (altnative units) will join your team instead of regular characters. Currently, you can recruit a total of more than 65 characters. However, because some characters share a quota, so up to 48 characters can join your group at the same time.

I have not included rules such as Isekai (reincarnation to otherworld), the multidimensional world, or summoning, so people who are not related to the Jugdral continent will not appear. There are some other Japanese hacks that seem to mix multiple worlds, but this hack is not the case.

This is a Japanese hack, but it implements an English text too. In English mode, the story and other texts are displayed in English. (You can switch between Japanese and English with one ROM.) 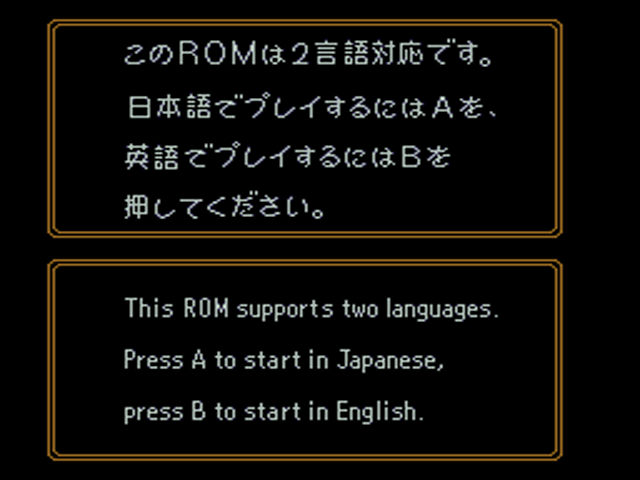 A new screen has been added for initial startup. Pressing B on this screen will start the game in English; pressing A will start it in Japanese.

Notice: If data exists in the save slot, this screen will not appear at startup. But, after starting the game, you can still switch languages by pressing the X button, at the settings screen.

Adjustments were made to units, classes, items, skills, formulas, and all other factors that affect gameplay.

The difficulty is much milder than in the old version (copied in 2008). I adjusted to remove unreasonable elements as much as possible in Normal mode. Those elements were ported to the hard and maniac mode.

And with features to help players, such as FE4-style turn save, and a casual mode. (These can also be turned off by changing the settings.)

The difficulty level is adjusted based on Normal/Classic and Hard/Classic, it is possible to clear Hard/Classic within the range of normally play. I don’t assume that you’ll have to redo the game until you get a hit with a statesave.

Normal/Casual is easier than the original, literally for casual play. But you can’t use most of the tricks used in RTA.

Hard and Maniac modes are available for those who like higher difficulty levels. In those modes, the strength of the enemies does not change, but the feel of the game is very different from the Normal mode because the thief, dancer, and staff user are greatly affected. For those who like the fatigue system.

Notice: I do not recommend playing hard or maniac mode on the first try.

There are too many changes to describe here. Other detailed specifications, strategy guide, update information, and credits are available on my blog. (Written in Japanese. Please use your browser’s translate function to read it)

I write the text of my blog as simple Japanese as possible to make it easy for machine translation, but if there is any part that you do not understand, please tell me.

Since some question was asked elsewhere, I will mention it here as well. I am the creator of this patch (since the first edition in 2005, always) and did all this translation myself now.

And all places where dialogue fonts are used have been translated (literally, everything). Even the messages in the shop, chapter titles and purposes, etc.

But I know in fact that most English speakers would not pick this up and look at it if the menu font had not been translated.

The English menu font will be implemented in the next few months with help from the creators of Lil’Manster, the FE5 translation patch. They are working on their own project now, and have not yet begun work on this one.

Updated. Added two new items. In test play I received several comments about the difficulty of the late game, so I added items to help.

You can get Again at the church in chapter 21, and Elrestore at the private house in chapter 22. Enemies do not use these.

I will be busy with other matters from now on, so I will stop updating for a while. I look forward to receiving feedback and errors or bugs reports from players. If a serious bug is caught, I will respond as soon as possible. You may write here, but if for some reason you can’t, can also contact me on Twitter.

Updated. The menu font has been changed to English. 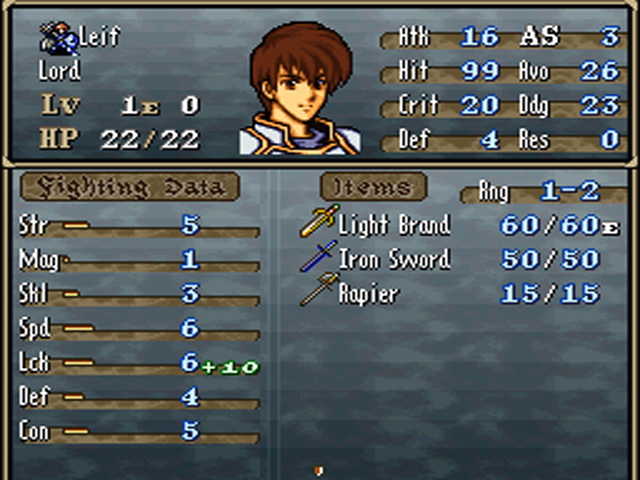 The developers of Lil’Manster has provided me with a build file. A huge thanks to them! I used a python program included in that to generate the menu fonts. (For the font table reference process in the game, I used one that I created myself for the development environment of Japanese.)

Due to a technical problem, I provide a separate patch from the Japanese version now. In the English patch, the menu font is always in English. The story dialogue can be switched between Japanese and English, as before.

I think I have translated all the menu fonts expect the Help screen. Please let me know if there are any problems or missing. The Japanese fonts have been removed, so any unsupported parts (if there are) should be shown as blank.

Note: The Help screen is currently inaccessible in the English version, has been changed to display the command only in the Japanese version. Because that has not yet been disassembled.

And the following new features have been added:

Updated. The process, converting menu fonts to English, has been incorporated into the main patch. Now you can have Japanese and English all in one ROM! When you press the X button on the Options screen, all texts in the game will switch to other language (toggles English or Japanese).

And, this update includes the following: