can you explain that more?

IDK why every single units gain all stats up at lv20
maybe its becuz my emulator had something wrong and only generated a series of RNG number for all my units growth rate and never mix it up with combat rng? Here are 2 images of lv21 0 gains 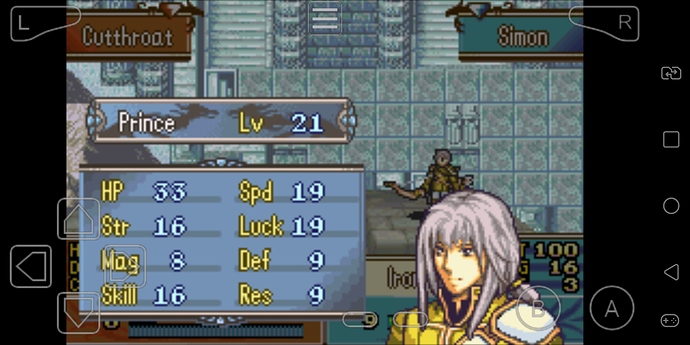 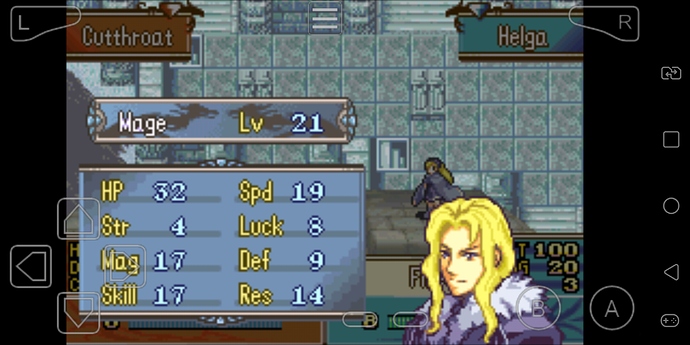 Mustve been really weird Rng or caused by updating your rom, keep me informed if this happens after level 22 and more, Holy Fire is a personal Tome for marik (I’ll label it as PRF in the next update) and they’re still called cutthroats since even though they call themselves “rebels” they act very much like bandits.

Thats a glitch please discard one of the blades, youre supposed to only get one, also keep the secret shop a secret lol, happy to see you found it though. As previously mentioned descriptions were wip. What “prank” chapter are you referring to? And how is the bubble weird? Theres talk bubbles for when conversations are available for characters.

Ch12
Reinforcement=a bunch of horrible promoteds bumps up on ur face
And the boss is pretty hard to beat (cuz only riley can solo him with a silver axe, meanwhilr others had to deal with stairs campers) and the real chapter goal is unseen at first (btw is the general necessary to kill?)
At the first sentence it got really the bubble broke (maybe due to too long sentence)
Btw why troubadour have pretty high str cap but 20 mag cap she capped it pretty soon but still have single digit str
And wolf blade probaly suits her better cuz nakana has 20 mag growth b4 promote (treasure cant be dropped lol ok i will give benched unit one of them)
(And promoted at 25lv bruh) (a little reminder for othets:end of ch14 is her promotion)

Devil axe is effective against mages???

Devil axe being strong against mages is a skillsystem thing, ill change off its effectiveness. I’ll look into chapter 12 and fix/adjust reinforcement enemies and Nerf the bosses significantly in the next update. Im also planning on increasing Nakanas magic growth to 30% in the next update along with +2 base magic, I’ll start working on the game again starting tomorrow so a update fixing these issues might come out tomorrow too. The chapter labeled “chapter 15” is the final chapter for the moment, but im working on making more as time goes, the estimated total amount of chapters is 30-40 for the end of this hack.

(No need fix the boss I just try to promote as late as I can or until lv30)
Promotes units caps at lv20 right? (Rip Aaron no more growths)
And thief couldnt use master seal
Is there a trainee unit later for the metis tome?
And the ch15 are thewyvern reinforcement comparedly late to the rest of the hack? I nearly reach for the second boss yet they hadnt come

Technically the “hunter” you get in chapter 15 is sorta like a trainee unit with high growths but bad
Bases. I’ll fix thief promotion thats odd I thiught it worked. The wyverns weren’t intended to be fought with so I dont mind them being too late but I’ll probably readjust when they show up when I get more playtest.

Update v0.5.2 has arrived
changelog
-Fix a certain thief not being able to promote
-Fixed a glitch where you get two blades from chapter 13
-Nerfed bosses from chapter 12
-Buffed Nakanas base magic by 2 and increased her mag growth from 20->30%
-Nakana has 1 leadership star unpromoted but 2 promoted
-Nakana now gets the “inspiration” skill at level 20 (+2 damage to nearby allies and -1 damage recieved to them)
-Simon can now learn the “silent pride” skill.
-Fixed devil axes so they’re not effective against mages
-text convo fixed in ch14
-Fixed some grammar mistakes in chapter 1
-Fixed glitch where chapter 6-2 enemies wouldn’t drop there gold.
-Brocks speed growth from 20%->30%
-Fixed some stat caps being incorrectly
-Nerfed enemy generals defense being too high
-Nerfed enemy warriors HP being too high
-Fixed some stat caps being incorrectly
-more small tweaks/bugs

but after I patched it Simon didn’t get the skill (anyways it’s not that important, probaly becuz he didn’t level up in new patch)
we can just chop warriors with killer weapons, (mage them both), hammer generals,
(this hack really reminds me of the dark hour, armors have wary fighter but generals dont so somehow they can stand 2 turn of hammer while general only lasts one turn )
they being tanky may add difficulty to the hack (tho I think spiders shd be nerfed a bit instead cuz they have no weakness and having both high hp and def (although u can still mage them, and there are a number of units who can be magic attackers)
Nakana’s charm already add 2 damage so that might make her a +4 support leader too (that’s not bad, especially after I was traumatized by Fe7 dragon due to lack of damage

Wary fighter is only on some stationary knights(which makes it less scary since they never move) its not much of a class skill. Spiders are supposed to be bulky since they can’t attack at two range. Sadly if your simon is already past level 20 he won’t learn the skill if you already played past level 20 though it’s not a extremely necessary skill to have.

Ah I see what you meant, those weren’t supposed to have it I’ll fix it in the next update.

thief can use master seal, but it didn’t promote her and it ended the turn instead lool
if used in preparation room it will make her portrait black until u press B

Has to deal with promotion branches I thought I made one for female thiefs but I guess not, ill update that soon enough

If anyone is wondering the mans in 6-2 is saying “Destruction of Darkness!!!”

Nice catch Its in german but that is indeed the translation.

… I knew it was German how else would I have known what it said.

tiny update:
changelog:
-Changed warriors base HP
-changed sages base magic
-Removed waryfighters from moving knights
-Fixed female thief promotion (in the promotion branch screen her custom palette for rogue will not show however once you promote it will go away, just a tiny graphical glitch)