My aim is to create a FE 8 which is challenging with a skill system, I need some help with unit placement, skillsets and so on…

I’d recommend hard mode/normal mode if skills are overwhelming you.

Finally I put up a discord server, feel free to join it for progress, feedback and feedback:

Check out the FE 8 Wild Mode community on Discord - hang out with 35 other members and enjoy free voice and text chat.

Download the patch and the readme from here, the current version is 1.8:

Although the SkillSystem is a fantastic achievement for FE8, unfortunately some things from the 3ds games wouldn’t quite translate that well. If every unit has 5 skills, it becomes very tiresome to view the status screen for each unit. On the 3ds, you don’t have to do that, as it’s displayed on the 2nd screen.

For a recent discussion of “skill bloat”, see this thread:

Title is exaggerating. But seriously. Here comes a game design rant. Context - I’m from 2013 onwards and i still fuck with fe7 so my bias is there. FE8’s skill system was a technical marvel and I’m glad it exists as a testament to how far my wizardly peers have gone with hacking. Its pretty incredible that this community is continuing to push the engine to do some pretty wickedly impressive stuff in FE8. Edit: For clarity, this is a criticism at the use of skills in projects, not the system it…

Have a look at other threads in Concepts & Projects, as well as the completed reskins of FE8 in this thread:

There may be similar projects that are completed or in progress already. As completing even a reskin of the game is a huge undertaking, I would encourage you to first have a look around and see what’s been done and if any projects interest you. Many projects would welcome a helping hand.

In any case, you should add some pictures of progress you make. Once you have a demo of a chapter or two, that could potentially spark the interest of others.

I made a patch already but it’s pretty unpolished.

Why not post it and get some feedback? Since you started out by saying you’ll need help with it.

I think for the sake of difficulty in Sacred Stones; I’d much rather see no Skill System and instead see changes that actually have a tangible effect on the enemy stats; Monsters with stats comparable to human classes, more bonus levels, more promoted enemies; maybe even adjust changes like not allowing Skirmish or Tower of Valni for EXP, or at the very least, making the layouts much more stacked in promoted monsters or adjusting drop rates so you don’t get things like infinite Spears and Runeswords as early as Chapter 9.

Lunatic modes in older games can work without drastically ramping up the power scale with “difficulty” like throwing skills on every enemy. Besides, skills on Awakenings’ lunatic were designed with newer mechanics in mind like Pair Up and forged weapons

You should probably link that in the op so it’s easier to see that there’s a demo available!

I like using skill to offset weight, it’s a good way to make it more useful (and not give str even more importance than it already has). Might give it a shot later, might not get very far though :V


Edit: Also i generally agree with serif re skills.

Okay so i played up through 5x, some thoughts.

First of all, it doesn’t seem like things are much harder? The skills on the player’s side are quite powerful (canto+ on every mounted unit?! I guess this will balance out once you start facing horse units but…) so even if you did up enemies’ stats, it’s largely nullified by the increased power on the player’s side. (Now granted i played on normal and should probably been on hard, but i didn’t know how much you had changed.)

The skills weren’t as distracting here as some other games i’ve seen, maybe because the party is quite small to start with. Still ends ups being a lot of busy work looking for who has what skill and what it does, though…

I don’t think Eirika needs Paragon given she’s forced into the party so much and (unless you change this) will ram her cap long before she can promote. She hit level 7 in chapter 1 (!) and was level 13 when i left off. She’s also naturally quite fast enough that i don’t think Darting Blow helps her much.

(It also feels like Ephraim’s skills are just better than Eirika’s? Ephraim really doesn’t need any more help to be the better unit between the two.)

I hate Counter being so common - it’s not “hard”, it’s “tedious”. It encourages you to just sit next to enemies instead of attacking them, so they’ll attack first, eat some damage, and be killable next turn (or in two turns, or…) Please reconsider this being a class skill, especially for both fighters and archers.

The gauntlets are fun.If you want a simple icon for them…?

(Feel free to edit, of course.)

Ross coming at a higher level is nice, he’s actually worth using now, but is it necessary to give him a trainee seal that sells for 10k? I don’t know if Ross’ contribution is worth more than the ability to buy 9 elixir charges since you’ll quickly have to start benching people anyway. I’d at least make the seal worth like 1k at most so it’s less tempting to bench Ross for it.

Colm doesn’t seem able to steal despite having the skill for it, i tried with several units in his joining chapter.

(I do appreciate there being more sword users on that map for the lance users to fight, but the middle merc didn’t want to move, making it easy to pick them off.)

Even with their skill, monsters are very weak. And Artur coming with Slayer for free is hilariously strong.


Unfortunately i can’t really comment on how to build satisfying difficulty, it’s not a thing i’ve ever practiced. But enemy bases should probably be increased in general, particularly monsters. You might also want to tweak stat-altering skills; they’re balanced for Fateswakening with much higher stat caps. Artur passively giving +4 speed to adjacent allies or Neimi being able to debuff for -6 def is kind of nuts here - try maybe halving the effect of skills like that?

I didn’t change the monster bases because of phantom map, but I did inflate them somewhat on hard mode and it gives the player the option to grind if you want to do it.

Unfortunately enemy A.I doesn’t use canto+ so rip that idea.

I kept the trainee seal as a guranteed chance to promote just in case the event doesn’t trigger.

Thanks for the icon

Counter I’m either considering removing it, but magic attacks bypass counter and canto+ should put most units in roughly a safe position.

Ross is kinda good, gauntlets, counter from fighter, water walk from pirates, paragon lets him scale up quickly to the enemies.

I understand skills can be complex and tiring to view, but it’s kinda like three houses here where the enemies have the same skills, once you memorize it, the tedium should be gone for some extent.

If point blank works on this patch, I’m considering giving it to archers, it should make them less of a nuisance 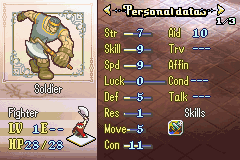 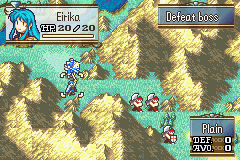 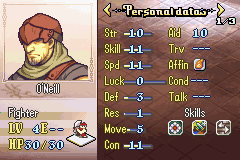 Those are ch 1 stats.

I need to update to the new skill patch of there’s any way I can do it without redoing all the work, let me know 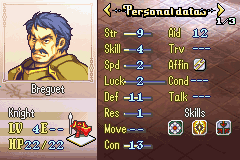 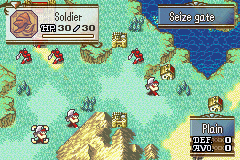 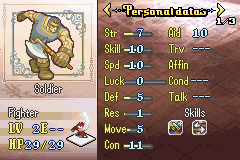 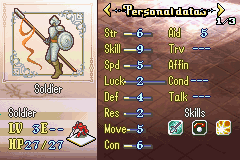 Seth: has saviour, best unit in the game, saviour will give him rescue utility even if his stats go bad

Eirika: frail as hell but darting blow should consisently let her double and paragon gives her quick exp

Franz: comes in with spectrum stance, essentially +2 to most stats on ep, almost all the cavs get a stance that define a niche.

Gilliam: has a stance that grants his extra def and provoke to bait enemies, enemies kinda get inflated, so having a provoke bot is kinda nice.

I’m considering the idea of using an mmb and hp bars and warning… it’s been a while since I started working with the hack… that shouldn’t completely remove the skill bloat but it should make it a bit less tiring.

A discord server is up and there are a few updates for the hack, feel free to check them out

For a rough reference, I’ll be recording an lp here, you can either use it to view how the hack is or will be progressing, these videos won’t be 100% accurate as I’ll likely be updating on the fly or as I keep playing but it would be a rough reference point:

gonna ask that you don’t just multi-post within like… an hour, it’s entirely unnecessary

Ye sorry abt that, I haven’t posted in a while and I had a lot to cover so I posted a lot

it’s the “within an hour” part that was the issue