Note: A new patch is currently being playtested by the one and only @Pandan. The download link here will take you to the current patch, which will be outdated and rendered obsolete whenever the new patch releases. Credits, Features etc. will be updated whenever a new version is out.

If you wish to playtest the new patch, message me on Discord #5448 ZarG. Thank you for reading and have a nice whatever-time-of-the-day-it-is-in-your-area!

Story: The remote continent of Amasea was once ruled by mighty warlords. However, the divine intervened and put an end to their reign. Several tombs of said warlords still remain across Amasea. A collector of rare artifacts, Grismond, has listed the help of a certain group of thieves: Skylar, Camian and Avanni. Grismond wishes to expand his collection with yet another item. This item is none other than the Eligor’s Spear. Little did they know that retrieving the Spear was the easy part of their journey…

Thank you for your attention.

Looks impressive! The storyline sounds unique and interesting, the mugs are all clean and look good, the maps you’ve shown have good design elements and look visually appealing aside from a few out of place tiles. This project looks very promising! You’ve done a lot of work on your own, keep it up! I will definitely give this a go in next few days and give you more constructive feedback.

I’ve played the first couple of chapters. Pretty good so far, though I’m still not sure if you’re meant to be able to go down to the bottom of the map in the second chapter.

Starting the route split with the route through the mountains. I don’t like how your healer is a green unit for whom you have to bend over backwards in order to protect him and reach the visitable House at the same time.

(EDIT: After a few more attempts, yeah, not having your healer be controllable makes the map way harder than it needs to be. He even tried to heal somebody who already had full HP! I had to play too slowly because of how low on HP everyone was getting and I wasn’t able to make it to the second House at the top.)

I’m attempting the other route too and still no luck. I think the enemies in your corridor are a little too tough and a little too many. (Knights when you don’t have any magic users? Really?) Even when I was playing as recklessly as possible to reach the green units ASAP I still couldn’t stop the boss from escaping.

I also hate how over half the Enemy Phase is just generics duking it out.

I think this hack is going to need some work to make it less cheaply difficult. For what it’s worth, the portraits are pretty nice, though.

@FlawlessJar Thanks for the compliments! Yeah, take your time. The more feedback and critique you can give the better.

@VonIthipathachai Thank you for your feedback! Can you explain what do you mean by being able to go the bottom? If you mean the area where the boss is, that is in fact intentional.

Originally the chapter with the healer was meant to be an escort map, but I scrapped that idea. Instead I opted for a map where you have to push through the enemy while at the same time make sure your healer is safe ( sorta like an escort map?). Making him playable from the get-go might work better though, given all the status ailments and the fact that you’re on a timer - if you care about the villages.

Have you tried using the panels in the areas with rocky floor? The idea with this chapter was to give the boss more than one escape point in order to make stopping him more difficult. I’ll see what I can do about the enemy phase being so lengthy, and as for the knights I believed having an axe user and Armorslayer would be enough to deal with them.

Aside from myself, there has been like one other person playtesting the hack, and even then they haven’t played all the chapters in the current release. Needless to say, that isn’t nowhere enough to gauge the difficulty. For the time being all I can offer is advice if you’re still open for that. I’ll be keeping an eye on this thread and see if there’re more people sharing your sentiments.

By the bottom of the second map I mean the southern half, from which I’m guessing all the enemies spawn. I was able to see a Fighter down there with an Energy Ring I wasn’t able to get. You’re constantly stuck at the top of the map near Grismond because you have to protect him and the enemies can potentially overwhelm you if everyone isn’t together.

I just tried stepping on one of those panels to open up a door. For one thing, there’s no indication given anywhere that they can be stepped on to open hidden doors. What’s worse, none of the switches actually block an exit, so the boss will likely still stay on his path to the other stairs.

I still can’t beat this awful map. I would suggest adding some other switches that block certain paths for the boss to escape through or changing existing ones to do that. Also, his Avoid is way too high. I would personally downgrade him to a Thief.

You DID playtest this map, right? How the heck did you beat it?

Yeah, that part is reachable. One strategy you can use is to send Cam or Sky on the island in the middle, let Agnessa solo the right hand side and send the rest to the left-hand side. Playing aggressively can be rewarding (since you can get some nice items) but also very risky. You have to use your Vulneraries and Elixir quite a bit.

As for the map with the rogue, the idea was that the panels serve as a visual cue: they’re supposed to stand out from the rest of the floor. I didn’t wish to explicitly say what they’re there for, because I think that’s a bit too hand-holdy. I made the walls look unmatching for the same reason. I wanted to make the panels sort of a double-edged sword: they would help you reach the NPC’s and the boss faster, but also open up more space for the boss and the enemy units to use. I can make the panels not only open new entrances, but also close some of the escape points like the stairs. I actually ended up adding those panels after testing the map.

Swordreaver helps you a ton against the boss, not to mention the Barrier staff and also Pure Water if you bought any. However, I might lower his Speed and/or Luck a bit, that should help landing blows on him.

I open the upper door with Sky and send others to the corridor below. Cam and Avanni do most of the fighting, I can step on the panels and still keep up with them because Sky as a thief has 6 move. Both of the NPC’s are recruited when you talk to either one of them, so once I reach them I can use them right away to block the boss. If you’re running out of time, try summoning a Phantom.

Edit: a Phantom can also serve as a roadblock for the boss, assuming it doesn’t get killed immediately.

I did try a couple of times to block the boss with a Phantom, but it couldn’t do so because other enemies kept killing it.

I can’t record or stream me clearing the map, but I can provide a guide by taking screenshots if you think something like that could help.

As for actual updates on the game:

Other changes to this map:

What else changed on the map:

I think that’s all for now. Note that these are still work in progress, current release still has the old versions of these maps. This update post is just to let you know what I’m working on.

Feel free to leave me feedback and critique. Thanks for reading.

I’ve edited the map for Chapter 1. Here’s how it currently looks:

My intention is to make it so that players can choose between ending the chapter early or attempting to clear the bonus objective of the map. You can play safely, but doing so means you’re not very likely to get all the goodies.

Edit: I have also edited the map “Adversaries”. Here’s the new version:

I have also been working on some new maps, but those are still in testing phase. My question is, do you prefer to wait until they’re done or would you rather have a new release now and get to play the fixed maps now?

It has been a while since I posted here. Currently the hack is undergoing some playtesting, and if need be I’ll make some adjustments and polishing. I think a new version will be released some time this month, and it contains more substance not only in terms of gameplay but story as well. Once the new version releases, I’ll go more into detail about what’s new and changed.

I want to thank those of you who have downloaded (and played) the game. Those who prefer to wait for an improved / the complete version, I understand. All I can really ask of you is patience.

i’m liking it so far. the difficulty is decent, and the characters are likable. can’t wait for the next update to release!

Edit: Development of this hack is finally resuming. Progress might be slow, as there are things I need to fix and stuff I wanna try out, as well as IRL business I need to attend to. Thanks for being patient.

Eyy, glad to see you’re using some of my music, when I get the chance I’ll give it a go

Here’s a little sneak peek of things to come, look forward to it!: 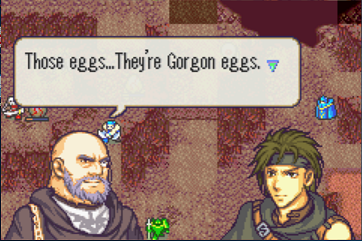 I’m currently doing some playtesting for Hard mode. Some of the maps have received new
Hard mode versions; for now all I’m going to say on that is that maps with new Hard mode versions have more changes to them than just enemies being tougher. In the meantime enjoy
me failing in my own maps: 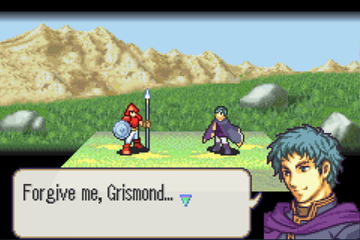 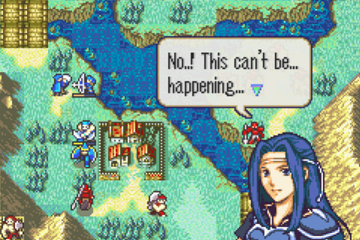 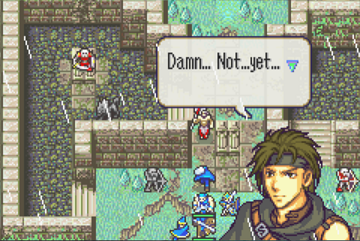 Sorry for the drought of updates. Now, however, I have updated the opening post with a new version of this hack. You need a clean FE 8 US ROM.

Edit: If you’re having problems with Ivan’s AI going haywire, try moving Skylar to this spot over here: 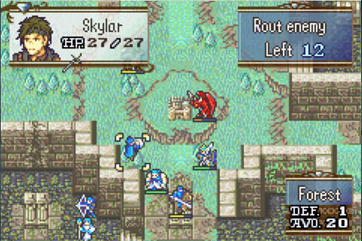 I’m not sure what causes the issue, but I think that if there are enemies between Ivan and Skylar, the AI doesn’t work properly. Ivan’s AI is set to go to Skylar once the rain first stops.

Edit 2: I did further testing and it turns out that moving Skylar to a certain spot will cause
Ivan’s AI issues. I couldn’t replicate the problems by moving Skylar anywhere else. Instead, Ivan’s AI worked just as intended. Here’s a screenshot where I marked the area that causes the problems, so if you want to recruit Ivan, Do Not move Skylar there. I sincerely apologize for any problems this may cause. 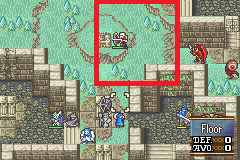 There was a bug with one of the talk conversations, so I went ahead and fixed it.