I decided to stop being a leech and explore this a bit after I asked my question about how other ROM hackers format text. These are mostly notes for my convenience, but maybe someone else can also make use of them.

The dialogue box would accommodate the longest line, which means that the “Hello.[A]” would awkwardly be by itself in a huge dialogue box.

For my experimentation, I used the shortest width characters, lowercase “l” and “i,” to get the most precise information. “l” and “i” are 1 pixel wide in the FE7 font, and there is always 1 pixel of separation in between characters, which means that each character occupies 2 pixels of space.

The dialogue box expands slightly in length for every 4 "l"s, or 8 pixels worth of text. Incidentally, an uppercase “W” is also exactly 8 pixels long, so a dialogue box can hold up to 25 "W"s with each individual W after the third incrementing the length of the dialogue box. 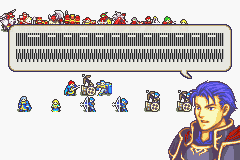 Now, unfortunately, most fonts don’t have the same spacing as the FE7 in-game font, so the metric of "l"s or "i"s or "W"s isn’t sufficient to determine dialogue box lengths if we were to use a commonly available font as a model. Even an FE8 font that I downloaded from the internet doesn’t have the proper spacing on the letters.

So a bit more work needs to be done in order to create a method to easily structure text for good-fitting dialogue boxes.

I knew all this years ago haha. It’s why I cringe when I play games that are spaced alliek:

All that empty space makes me nauseous. I’ve even been known to harp on Prime about this in TRTR.

I also hate it when text is formatted like

Text looks better when it expands to fill the dialogue bubble horizontally even if the line lengths are uneven or there is some extra space located at the bottom of the dialogue bubble. Unfortunately, Blazer advocates for the former formatting in his Ultimate Tutorial, so everyone did it the annoying way for awhile.

Now, unfortunately, most fonts don’t have the same spacing as the FE7 in-game font, so the metric of "l"s or "i"s or "W"s isn’t sufficient to determine dialogue box lengths if we were to use a commonly available font as a model

Someone who knows how to create fonts, go do this

http://pastebin.com/sfFYzf8g
The widths of each character in the conversation font, if it helps.