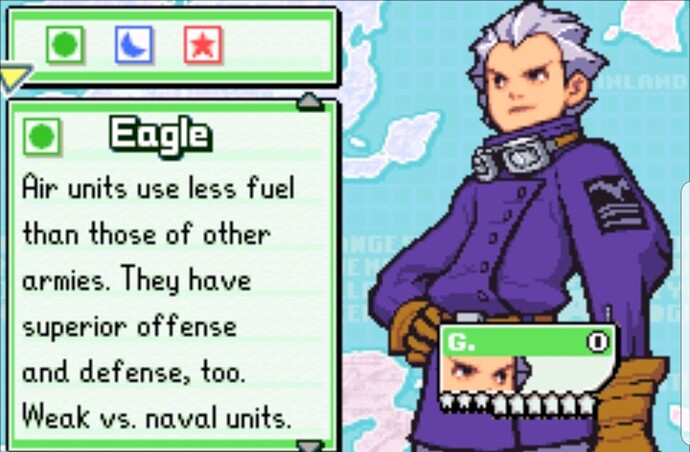 In Advance Wars some COs provide passive abilities, as above. If we were to have specialist commanders of armies in fire emblem, what abilities would they provide to all units? And what would their starting party of ~3 units look like?

Weapons with full durability in supply at the end of the chapter gain +10 bonus durability (max 63). Lord, Paladin, Merchant.

Pirate Captain
All infantry and armor units can waterwalk. Any units that can naturally waterwalk have the movement cost of water reduced by 1. Pirate, Myrmidon, Archer

Pestilence
When units attack or are attacked at melee range, enemies within 2 spaces of unit are poisoned/inflicted with stat debuffs. Soldier, Shaman, Fighter

Faith in Potential
All units have +10% to all growths, but stat booster bonuses are halved. Lord, Villager, Archer

Struggle against fate
All units gain +15 dodge and +15 crit avoid while below half health, while at full health, crit avoid is set to 0. Myrmidon, Thief, Shaman.

I actually had a pretty crazy (probably bad unless it goes through careful balancing) idea of implementing Yggdra Union-style cards, but instead of special moves and movement, each of those cards is like a Days of Ruin CO that provides passive bonuses to all allied units within a commander’s range of influence. The idea is that each commander has several cards and they can swap them out depending on their strategy (and each card has a set limit of turn uses per battle, so you can’t cheese using only the overpowered ones). I thought of quite a few ones xD I’ll spare you the more normal ones, but here are the gimmick ones.

Barricade
Small range of influence. +3 Def during enemy phase for every allied unit within two squares of the commander.

Valkyrie Brigade
+3 Atk, +3 Mag for every female unit under influence.

And the crazy one, probably enemy-exclusive, held by the boss of some Victory or Death-like map:
Knight Unison
Very large area of influence. +0.5 Atk, +1 Def for every unit under influence. -1 Mov.
(The idea is that the commander is at the center of the formation, untouchable, and the way to make him vulnerable is to kill most of their army first)

Lash
Defence bonus from terrain is also added to damage, and all infantry units are capable of moving over peaks at the cost of 5 move.
Druid, Brigand, Mage.

Sturm
Units deal and take +2 damage and move through terrain unimpeded, except in snow. Meteor tomes also damage all units in a 2x2 diamond around the target tile.
Bishop (FE3), Wyvern Lord, General.

My favorite idea. Translates Hawke to FE very well while not being op.

My own concept would be:

Opening Gambit
When engaging with foes that are at 100% HP, all units prolong combat by one round
Paladin, Mage Knight, Valkyrie

Unleashed
Units with no allies within 3 spaces gain +2 mov at the start of their turn
Brigand, Hunter, Myrmidon

One with Fate
Units all have -30 Crit Avoid; Units will all live any attack from above 1 HP unless already at 1 HP.
Sage, Pegasus Knight, Priest

A pair of COs that effect Growths vs Bases, but at cost, like