Hello people, after some weeks of playtesting we finished all the main things we needed for the hack, so the time of the release has come! Here it is, Fire Emblem: Inheritance (part 1), a original hack made by me and Vivider.

Yes, part 1, because originally the project was meant to be much larger, but we realized it was too big and we decided to split it in two separate games. We’ll be starting to work on part 2 as soon as possible. (For this reason you’ll find that not everything will be explained on the story and the plot of this hack). We’ve been working on part 1 for a year and a half and we hope we’ll be done with part 2 in a similar time span.

We have added a feature to the game which is the Minimug, some people might not like it so we put two versions in the link, one with and one without Minimug (named accordingly), choose the one you prefere.

Here is the link to download the newest patch, you have to apply it on a FE8 USA Rom: link removed

and here is the link to the discord: link removed

We created a survey, in case you want to give us your feedback anonymously: link removed
You can write anything you want, if you want to insult us for the map design or for certain plot choices, feel free to do it there. The only thing is, please motivate your thoughts
Thanks.

The hack consists of 26 chapters, with 46 playable characters and it was created with in mind the idea of creating something different from most other fe games, both regarding the gameplay and the story. For this reason we’d like you to read the following informations, otherwise you could find yourself really confused and have trouble going through the chapters.

here is a link some of you might find useful (how to patch a ROM):

The biggest shortcoming in the hack might be the lack of polishing in the dialogues. That is mainly due to the fact none of us is an English native speaker. I am the one who wrote most of them, and, although I know English pretty well, it does not come natural to me. For this reason we would really appreciate some help form natives who could report and help us to polish the dialogues where needed.

We hope you’ll enjoy the game, and we look forward to the feedback you’ll give us.

Gave it a shot. First chapter was pretty fun, although quite easy on normal mode, i’m not really seeing the “fe6 hard mode” level here. The ultra-beefy monsters were a bit scary but by the time i drew them there was just one enemy archer left so i could pretty easily light magic/bow them to death.

All in all fun to play so far, might give chapter 2 a go later.

About the text, both I and Gorgonath are not native speaking english, so every help and suggestion on it is really appreciated, thank you.

Sounds good to me!

All right, then if i see any more oddities in the text i’ll keep pointing them out. 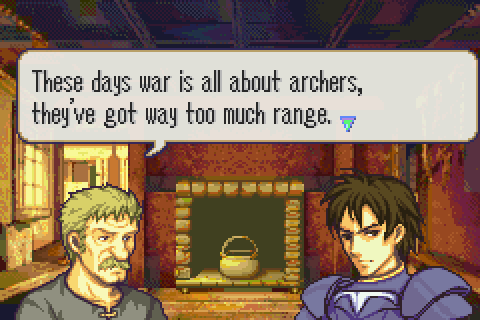 I’m definitely going to try this hack out in the next few days, it seems really promising. Congrats on a full release!

Thank you a lot, we really appreciate it.

As Vivider already said neither of us is a native English speaker. I (the one in charge of writing most of the dialogues) know English pretty well, but I lack that spontaneity that natives have, so my writing might feel a bit weird sometimes. Report here whatever you feel could be said in a better way.

not entirely sold on magic needing it since it’s traditionally very strong anyway, but it’s really too early to tell.

We know but we wanted to make it so each type of magic has something particular that distinguish it from the others. Overall I think we can say we’re pretty satisfying with how the balance of the hack came out.

Hello, I start playing the hack and I have to say that is really interesting, now I’m on chapter 2. There should be some pegasus knight to recruit somewhere but I’m not able to find it. Someone has some clue about?
Congratulation for the relase, the hack seems full of innovative gamplay solutions and I hade a lot of fun till here.

Someone has some clue about?

I give it a try. Thanks

We realized there’s a mistake in the village dialogue in chapter 2, it will be corrected in the next patch.

To continue from your actual save, you can rename your .sav as the name of the new rom or load a savestate after opening the new updated rom.

After the update you might get a bug: selecting a pg might softlock the game.
In that case just reset, resume the chapter and all should be right.

So I’ve been playing this hack for quite a bit, and beaten chapter 13 so far.

I’m not the expert in game balance so I’ll answer you only regarding Phago, tomorrow Vivider will answer you about the rest.

also if possible w’d like stuff like this with spoilers in it to be put in a hidden text, so that newcomers do not see them. ^^

The last button on the right, then hide details, write where it says “this text will be hidden”

Alright, got it now, and thanks. And yeah, I guess that would make sense for him then.

Thank you for your feedback, if you have any question or suggestion please tell us.

Yeah, I think that makes sense for Spook. Though giving him the ability to summon creatures might give him just as much of an edge as compared to the rest of Dietwald’s group.

I guess that kinda makes sense for that Pegasus Knight’s promotion. Didn’t realize they offered something different there. Sad part is, I haven’t gotten Phineas ready for promotion yet, so I haven’t seen that either. That and I’ve been rarely using Aden, and I dropped Ladd a long time ago cause I haven’t given him much attention.

Are you playing normal or hard mode? Can you give me a feedback about difficulty please?