After much travail, I present to you…
Fates Mercenary Anna!

This is the last Anna I know of that anyone was working on! We still have 3-4 days before the competition ends, so if anyone wants to add another Anna or Jake to their entries, you’ve time to do so! I’m looking forward to seeing how the votes pan out, and I think I have a solution for making the voting more interesting. We will see!

Just a small edit of Fe7 Anna to make her look like Path of Radiance / Radiant Dawn Anna.

Thought I’d put it here anyways since I had her lying around.

Another submission via Discord! A second Pirate Anna, but with a few changes from Wasdye’s Anna’s above. 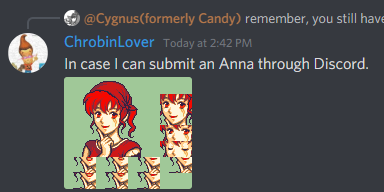 Edit: DISQUALIFIED. Chrobin is also permanently banned from contributing to this contest. Let that be a warning to art thieves.

That person is a notorious art thief. That’s not A second Pirate Anna; it’s just Wasdye’s work stolen and reposted without credit. You should probably delete the post, and block them on Discord for good measure.

Are you being serious? That’s a pretty big accusation, man. It does look similar to Wasdyke’s Anna, but there are a bunch of differences.

I did notice this a bit later on…

Sorry guys, my bad. I won’t forget this in the future. Chrobin is disqualified. 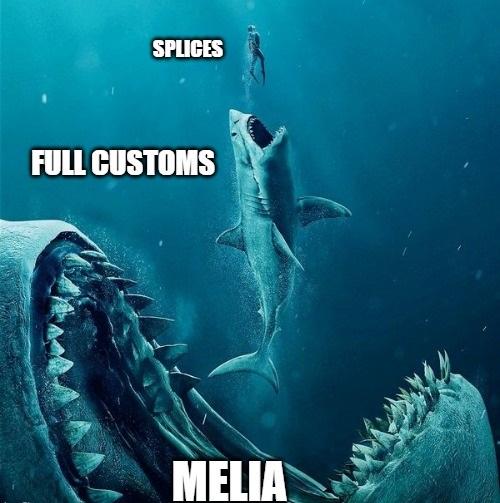 Assuming no other entries, it’s fitting Melia would cap off the first round of the competition. Voting is going to be a doozy.

Update: I have the poll ready, but just in case of a last minute participant, I won’t post it until the 14 days are up! 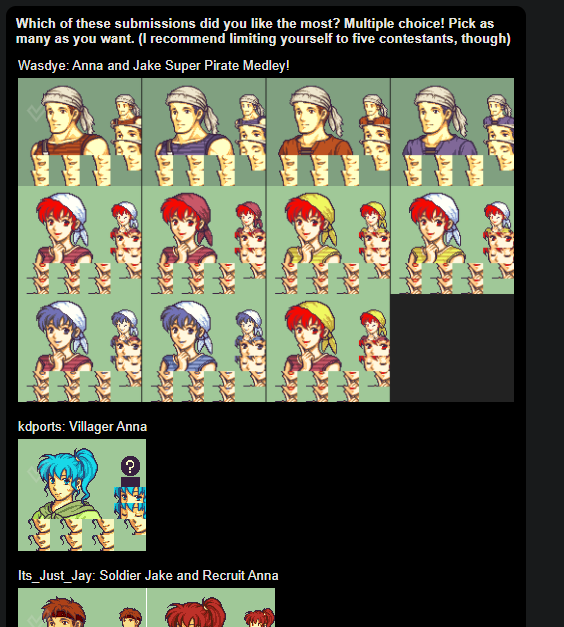 Why not, I guess.

I fancy this a little subpar but that’s just what happens when you elect to do something hours before a deadline.

Tsushi… that is too cute! Is this a random design you thought up, or did you base her off anything?

Also, we have just entered the last 24 hour stretch. The contest ends in 22 hours.

Yoooo! Alright everyone! We have officially hit the deadline. I originally planned to post this poll on a different external website. In fact, I had the poll made and everything, but then I found that it completely garbled the images by turning them into jpgs. Yuck! My plan was to allow everyone up to 5 votes, but I couldn’t find another website that:

My other preference would have been to use a site that allowed me to create a poll with Ranked Choice Voting, but none I found were anything other than advocating for such in US and other country elections, and those that allowed me to create RCV vote-type polling didn’t allow images. Also, FEU has a maximum of 20 entrants, while this first round had 21 entries. Rats.

So here we are now. I’ll just use good ol’ reliable Google Forms.

You may vote for up to 5 people in total!

This poll will run for 3 days. If there is a tie, I will let it run for one more day. If there is still a tie after that, I will perform a tiebreaker round with one vote per contestant. If there is STILL a tie, I’ll flip a dang coin.

So, without any further ado, here are all TWENTY-ONE entries! 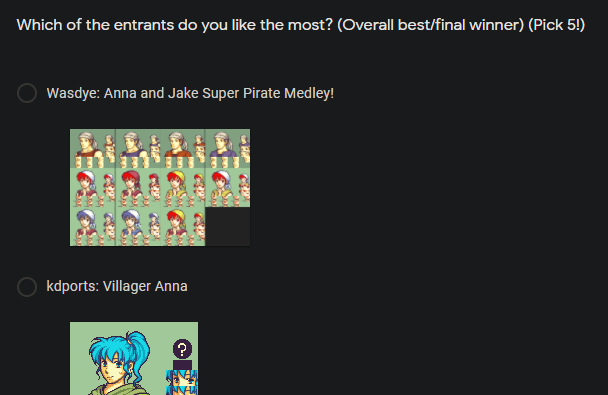 I’m amazed by this competition’s first round of turnout. I originally anticipated a tepid reaction, perhaps maybe 5-10 entries, tops. Instead, I think we may have broke every single spriting competition’s record from all the competitions I’ve overseen. Twenty-one entries! Wow! Having recently compiled the entirety of SF’s spriting comps onto a gigantic sheet (Lenh did 95% of the heavy lifting, tbh) I can safely say FEU’s turnout for this competition was way grander than any of those.

For everyone who inevitably won’t win the votes, just due to how MANY of you there are, don’t feel bad! You’re still contributing to the repo and helping out future project creators! That makes everyone here a winner in my book.

So, let’s get on with this! Start voting, and I’ll see everyone in 72 hours!

EDIT: I found out I could set a maximum number of votes. Now everyone can only vote for up to 5 people. So, that’s great! You also need a gmail to validate so you can’t vote multiple times, which is good because the original version had people voting ad infinitum. This is my first time ever using google forms, so this is a learning experience. 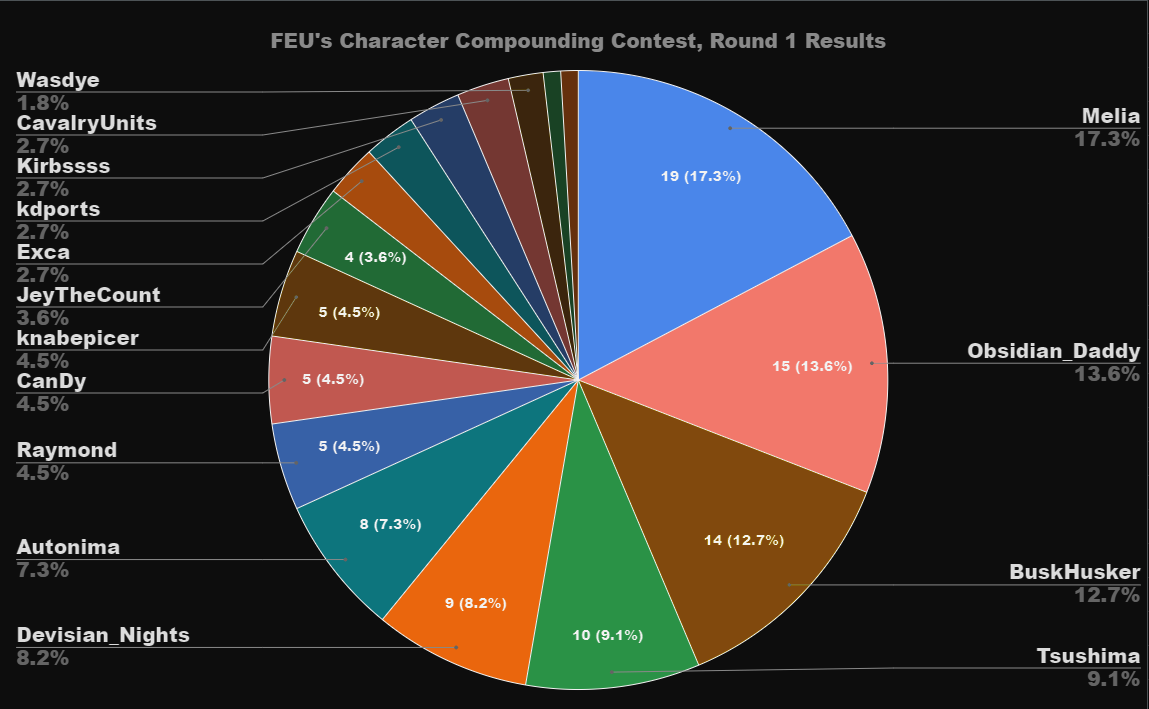 Look at the pie 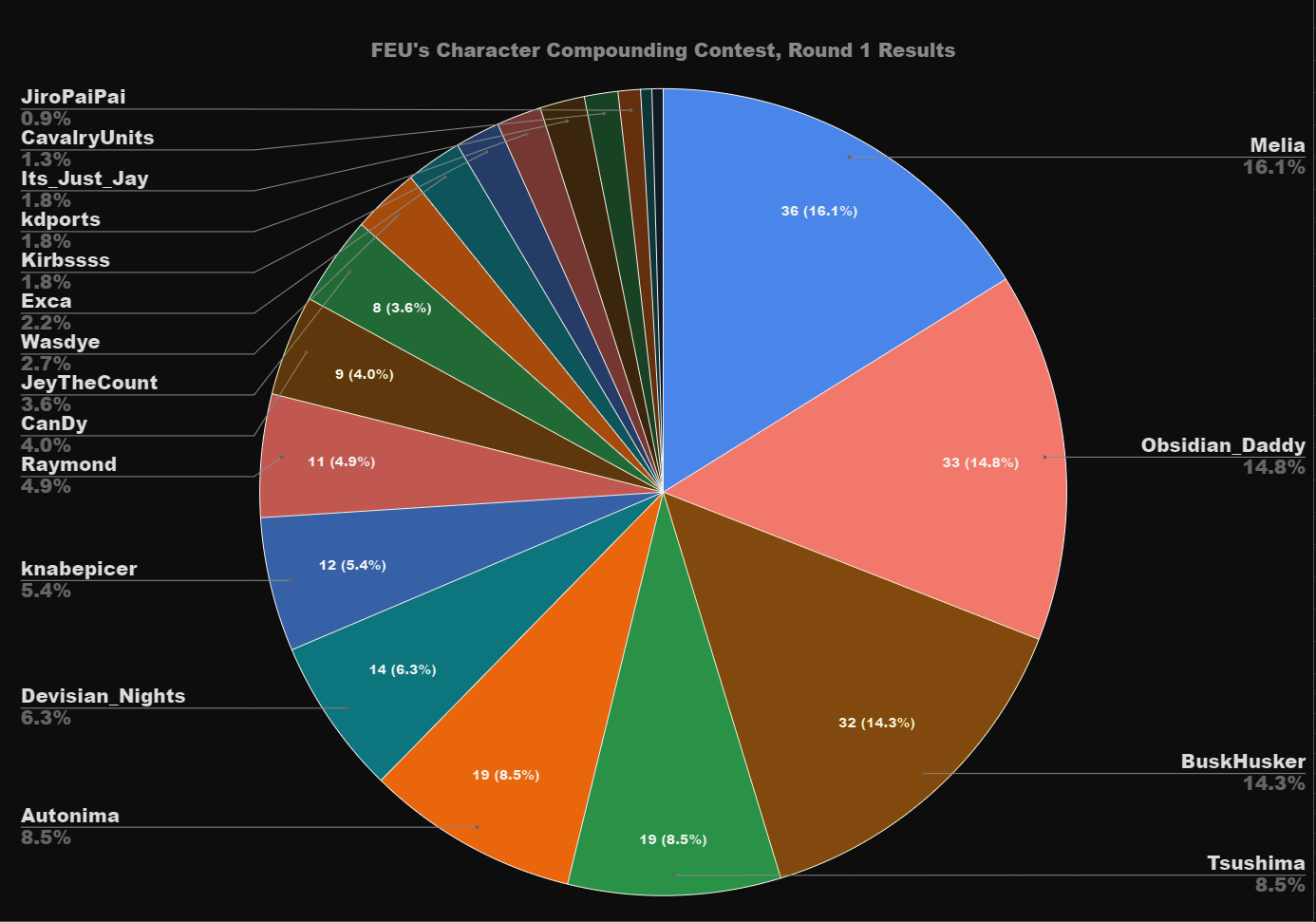 Remember to vote in the poll!

There’s a heated battle for second place occurring right now, but Melia is only a few points ahead! BuskHusker jumped to second for several hours, but Obsidian took back his position again just a few minutes ago!

Autonima, too, he leapfrogged Devisian Nights to tie with Tsushima and was actually in 4th place for several hours, too!

It’s still anyone’s game at this point! Shoutout to Wasdye who was at 1 point for the first twelve hours, then suddenly exploded to 6 points. Big boost!

you should be a sports commentator

Okay, everyone! We’ve reached the end of Day Three, and the results are in! With 84 people having put their answers in, and with 54 points in total, @Melia wins the first round of the Character Compounding Contest! Whoooo!

Melia, DM me your choices for the next round’s two characters! I sent you a DM already asking who you’d like to see.

Now then, let’s break down how the results finally settled. 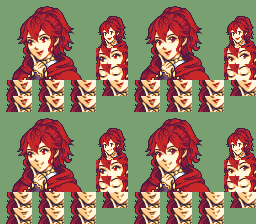 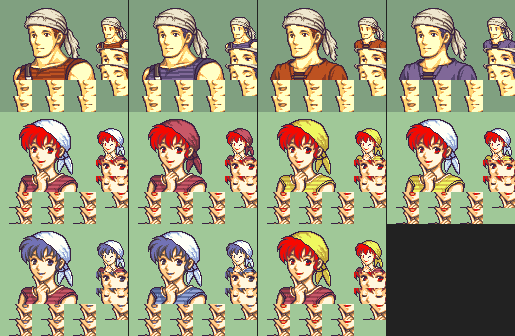 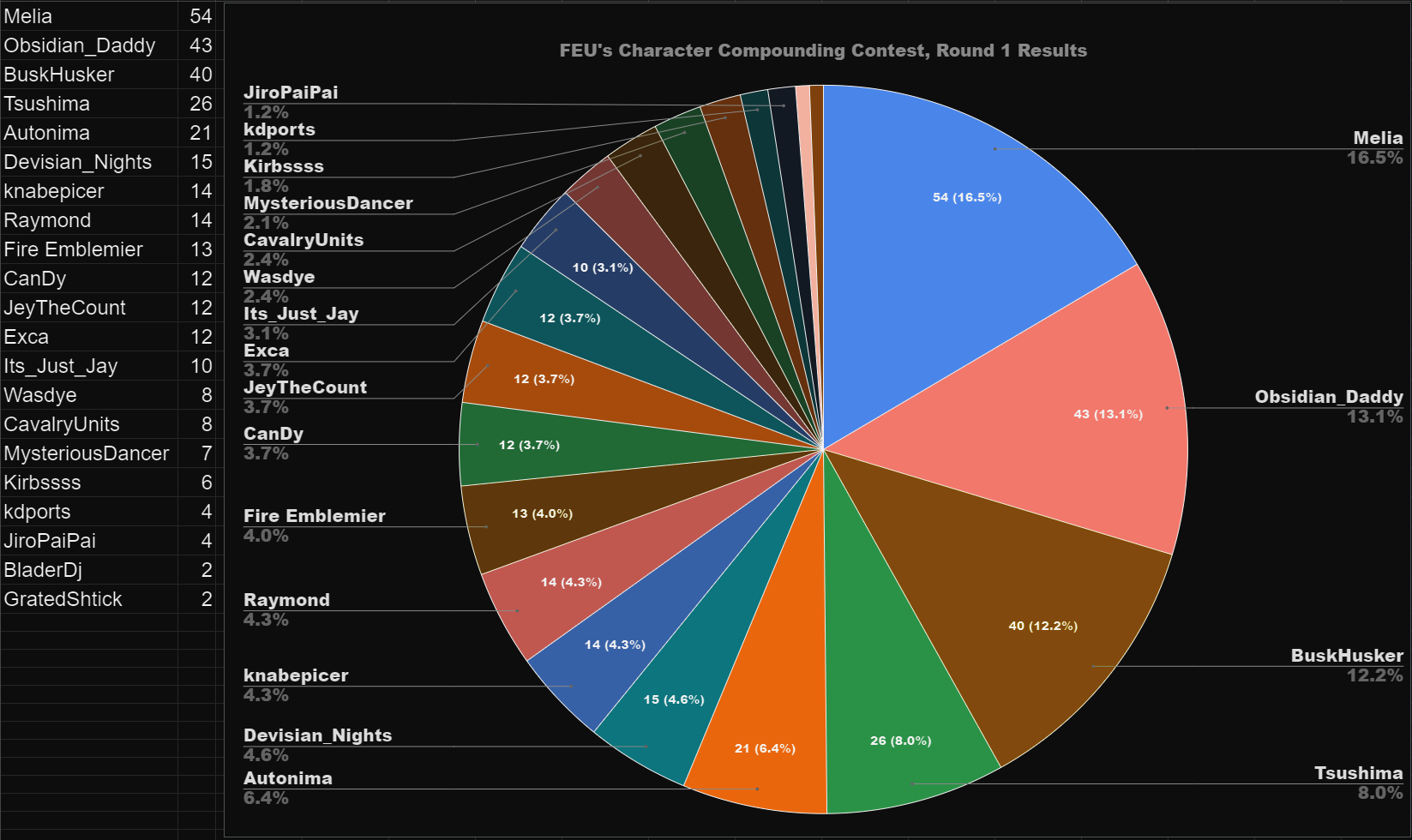 A few things I should mention:

Another really strange thing is, four people voted for Jiro’s entry, despite it literally just being Anna and Jake without any edits.

I don’t get it. You guys are weird!

Anyway! That concludes round 1 of the CCC! @Melia please DM me your male and female mug choices for the next round!

My only stipulation: One of the mugs has to be from a GBA game, be they a male or female character. The other can be a non-GBA FE character.

Great first round, everyone!

Here is the topic for Round 2! Go go go!

Hey guys, welcome to the second contest entry in my neverending quest to expand the Portrait Repo, create cool alternates of existing characters, and make resources for the community to use! I’ve been hard at work expanding the Portrait Repository, adding Free To Use and Free to Edit (F2U/F2E) mugs from all sorts of generous community members. This contest is all about continuing that process by generating brand spanking new characters for the Repo. Contest Premise: What is a type of mug that…