Anyone ever make patches for the Vertical Arrow (ie those light beams from the FE6 Gaiden) feature?

The Vertical Arrow is a feature in one chapter of Binding Blade that is still completely functional in Sacred Stones, yet no one seems to use it. I guess maybe because it’s kind of unfun in how it’s executed in Binding Blade, but I think it has a potential as an element in Fire Emblem hacking. Only, it is kind of limited. It works by attacking one vertical column of tiles on a repeat timer. You can’t set an end time for it, nor can you set a Y position for it to start. What I’d like to see most of all from it though, is the ability for it to not damage enemy units. The only hack anyone seems to have made was altering the damage it deals. So has anyone, or could anyone, make a patch with the Vertical Arrows that could do some of these things?

Wait. Aren’t those same arrows used in the Tower of Valni’s last floor? 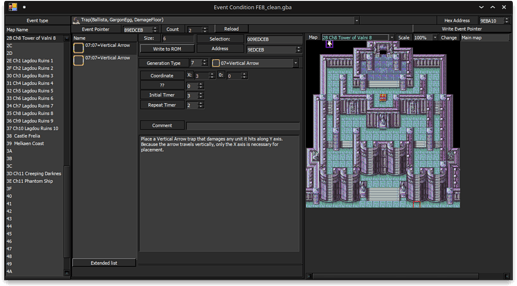 Well they specifically mentioned Y position (I assume the requested hack would make it so that the arrow doesn’t affect the entire column, but only below the specified Y coordinate).

In that case, it shouldn’t be to difficult to do. The animation part of it might be the most troublesome.

It might be easier to use the poison gas trap as a base rather than the light beams because they’re already tied to both an X and Y coordinate. And they can go in all four directions.

Yeah. You can move the arrow from side to side but it always comes from the top of the screen. If you could move it downwards then you could make it look like an attack a character on the map is actually using.